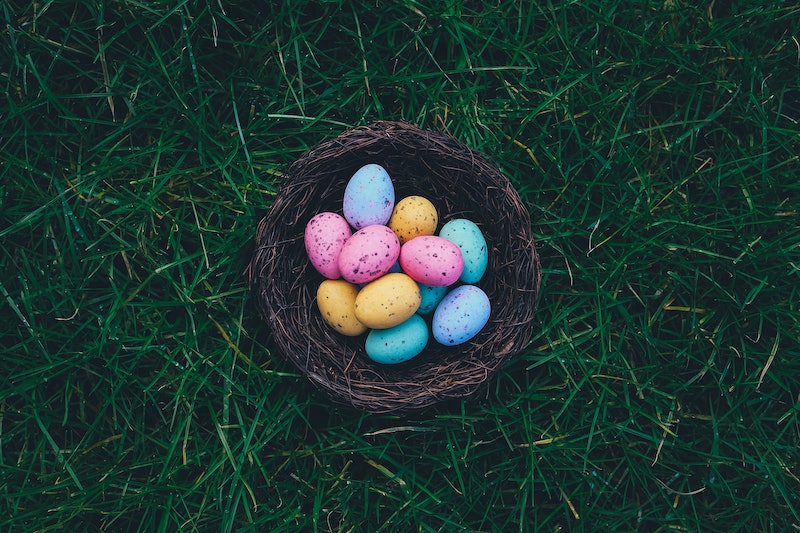 I’m sure you think you know everything about Easter; I felt the same way. Yes, Easter has to do with the death and resurrection of Jesus for Christian religions — that much is obvious. But what about the bunny that lays colorful eggs like a chicken? Because I’m 100 percent positive that he wasn’t in attendance at Jesus’s crucifixion and at the tomb three days later. So although we may know a lot about this holiday, there are still a ton of things you didn’t know about Easter that make this holiday the way it is.

Just like Santa Claus’s correlation with Christmas, the Easter bunny was brought up by different cultures and beliefs. Some could even argue that the celebration of Easter was never really a Christian holiday to begin with, and the church just decided to tack on the story of Jesus’ resurrection to what was once a pagan spring festival tradition. Whatever you may believe, there is one thing for sure: Easter isn’t Easter without lots of Peeps, chocolate bunnies, and egg hunts. So how exactly did these traditions become associated with the story of Jesus’s empty tomb?

There are also a ton of traditions that actually have nothing to do with the holiday in general, like the White House egg roll or the Peep art show. For some, Easter is just a time find chocolate melted chocolate candies inside colorful eggs at the park, wear new clothes, and of course, figure out where to take your first bite of that chocolate bunny — on the ears or the fluffy butt.

So besides the story of Jesus and his death and resurrection, here are a few things you probably didn’t know about this iconic holiday:

The first ever egg roll, where children push eggs across the White House lawn, happened in 1878 when Rutherford B. Hayes was President of the United States. The egg roll originally did not have a religious meaning, but now people say that it reflects the stone that rolled to open the tomb of Jesus.

The Easter Bunny may or may not have been a pagan custom.

According to some sources, the Easter bunny allegedly came from the “goddess of dawn” called Eostre or Eastre to whom many pagan culture hosted spring festivals in her honor. Since she represented new life and fertility, and always attached to a hare, the bunny can be easily representative of those themes based on their closeness.

However, there are also lots of other theories that these pagan festivals actually didn’t exist. But what is known is the fact that the first American appearance of the Easter bunny happened in the 1700s. German immigrants in Pennsylvania would tell children to make nests for the “Osterhase” to lay colorful eggs. Therein lies the tradition of easter baskets.

Easter eggs can symbolize a lot of different things.

An Easter egg symbolizes new life, but that means different things for many cultures come Easter time. For pagan cultures, an Easter egg is associated with spring and fertility, which goes back to the theory of Eostre the goddess. For Christian cultures, the message of new life reflects Jesus’s resurrection.

As for eggs being dyed, there are a ton of theories ranging from pagan spring festivals to the blood of Christ. The most promising theory in my opinion would be the fact that eggs were once banned during Lenten season, so people would decorate them right before Easter in order to enjoy them once was the fast was over.

Think your Easter candy costs too much this year? Well be happy you’re not a 19th Century Russian Tsar, because during that time it was common to gift lavishly expensive Fabergé eggs worth hundreds of thousands of dollars. They would be dotted with jewels and pricey metals of all sorts. Although they aren’t the exact kind, buying Fabergé-themed eggs are still possibility ... just make sure you have over $31,315 on hand.

The world's largest egg, made with chocolate from 27 different bakeries in Argentina, was created in 2012. It reached 27 feet in height, weighed four tons, and was created by a mold made of wood for a foundation.

A tradition that started in Great Britain, hot cross buns were made to eat on Good Friday. The reason for the title? Each bun would have a white cross cut on the top to represent Jesus’s suffering on that day many years ago.

9,753 children searched the grounds at Cypress Gardens Adventure Park in Winter Haven, Florida in April of 2007. Whether all of the eggs were found was not recorded. However, I’m sure if there were a few left in the square, Kirk would not sleep until all of them were found.

It’s bad luck to not wear new clothes on Easter.

It was a common superstition, especially for New Yorkers in the 1800s. They would leave churches and parade the streets with their new clothes, which evidently started the tradition of the NYC Easter parade.

It takes approximately 1,331 years to make peeps for one Easter season.

Although that number doesn’t seem right, math makes it possible. According to data recorded after Easter 2016, 700 million peeps were eaten by Americans last year. It also takes one minute to make a single peep. Since there are 525,600 minutes in a year (cue that Rent soundtrack), that means it takes a total of 1,331 years. Now obviously factories can make multiple peeps at a time, but still ... that’s a lot of sugar.

There’s always the debate on where to start nibbling at the iconic chocolate bunny, but it seems the crowd that go for the bushy bunny tail first are actually a slimmer crowd than the world thought.

Peep Art is a thing.

Did you know every year people submit pieces of Peep art to win the Peep Diorama Contest? Yup, it’s been a thing for over ten years now — and the winner from last year is pretty much my favorite thing in the world (hint hint, how Inside Out would go if it were about someone else…).

The chasing and burning of Judas is actually a thing, too.

If you’re not familiar with the story of Jesus’ death, let me give you a crash course. Jesus had 12 disciples that followed him, and one (named Judas) betrayed him to governmental officials so that he could be captured and sentenced. Jesus was captured, and Judas was given a small pouch of coins as his reward. In older times it was known that Judas was scared of wooden noisemakers, which is why the tradition of chasing Judas out of a town (or church) with noisemakers was born. This tradition originates from the Czech Republic, where a group of boys burned a cross and screamed “We are burning Judas!” The tradition is carried out throughout multiple cultures around the world.

More like this
25 Quotes About Love To Share During Pride Month 2022
By Madeleine Aggeler and Emma Garza
Are Gemini & Cancer Compatible In A Relationship?
By Kristine Fellizar
Here's Your Daily Horoscope For May 25, 2022
By Mecca Woods
The May New Moon In Gemini Will Affect These Zodiac Signs The Most
By Brittany Beringer
Get Even More From Bustle — Sign Up For The Newsletter