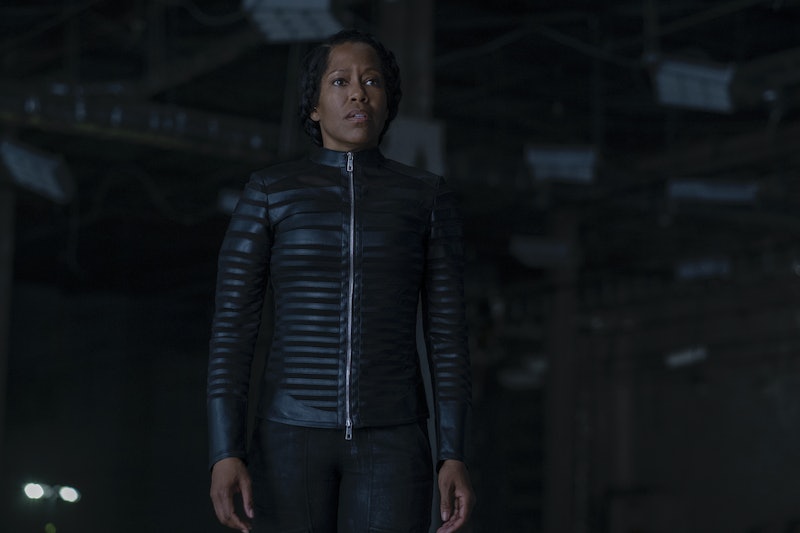 "Nothing ever ends." So Dr. Manhattan warned at the end of Alan Moore and Dave Gibbons' Watchmen. Damon Lindelof's updated "re-mix" of that source material has proved how true that sentiment is. But the graphic novel did end and so will the HBO show… and there are still plenty of questions Watchmen needs to answer before the credits roll on its finale.

All three of Damon Lindelof's TV shows have revolved around mysteries in one way or another, and they've all handled those mysteries in very different ways. Lost withheld information long enough to make some fans grumble; The Leftovers was upfront that it would never answer its central mystery; now Watchmen has been playing surprisingly fair with its reveals, solving mysteries at a swift and consistent pace throughout the course of its first eight episodes.

Heading into the finale, viewers have already learned the true origin of Hooded Justice, the identity that Dr. Manhattan has been masquerading under, the location and purpose of Adrian Veidt's cosmic prison, the nature of the 7Th Kavalry's master plan, and more. The landscape of Watchmen has shifted beneath viewers' feet multiple times — but there are sure to be many more game-changing twists to come in the final hour.

1. What does the Millennium Clock do?

Probably the biggest, most essential question that needs to be answered heading into the finale is the purpose and function of Lady Trieu's massive Millennium Clock. Yes, it tells time… but what else does it do? Will it manufacture another extra-dimensional attack of some sort? Emit a wave of Nostalgia that will re-wire people's brains? Is it a time machine that will take Tulsa back to 1921 in an attempt to undo the Greenwood massacre, the inciting incident of the show — and the origin point of all superheroes within the show?

2. Who is Lady Trieu's father?

Last episode, Lady Trieu confirmed that Bian — the young girl everyone assumed was her daughter — is actually a clone of Trieu's mother, and has gradually been receiving the woman's memories in Nostalgia form in order to more fully become her. But Trieu also insinuated that her father would be joining them, making the family reunion complete. Who is Trieu's dad? The Comedian? Adrian Veidt? Dr. Manhattan?

Lady Trieu was first introduced when buying a couple's farm out from under them just in time to lay claim to something falling out of the sky onto their property. Fans have theorized that this fiery meteor was Veidt returning to Earth from his imprisonment on Europa. The finale needs to either confirm that theory or reveal what else is lying in the smoking crater on that Tulsa farm.

After the 7th Kavalry kidnapped Agent Laurie Blake, their leader Senator Joe Keene revealed his master plan to the former vigilante: he plans to use the same process that created Dr. Manhattan to transform himself into a super-powered godlike being. What's scarier than an omnipotent, omni-temporal man who can be in two places at once and explode people with a flick of his fingers? How about an omnipotent, omni-temporal white supremacist who can do those things? Will Keene actually pull this off? Will his plan be foiled? Will he perish in the attempt?

5. Who is funding the Kavalry?

While the 7th Kavalry appeared at first to simply be a ramshackle operation of racists, they have shown themselves to be in possession of advanced technology that belies their carefully curated image. Who devised their teleporter and built whatever cage they plan on trapping Dr. Manhattan in? Senator Keene is supporting them, but is he alone powerful enough to attain such dangerous toys? Or is there somebody else hidden behind the curtain and pulling their strings? Could it be Veidt, returned from Europa? Lady Trieu, playing both sides of the conflict? Dr. Manhattan, unfurling some scheme only he can see the ends of?

In the show's penultimate episode, Cal — aka Dr. Manhattan, née Jon Osterman — warned his wife Angela that the Seventh Kavalry would teleport him and then destroy him. The former part of that prophecy came true at the end of the episode, as he was zapped away from their home by a teleportation device. But will the latter part come true as well? Can Dr. Manhattan be destroyed? Veidt attempted it at the end of the graphic novel, and Manhattan still managed to reconstruct himself, after all.

7. Who did Manhattan give his powers to?

Call it Chekhov's egg. During his meet-cute with Angela in that Vietnam bar, Dr. Manhattan posited that he could bestow his powers upon another being by placing them in a piece of organic matter — like an egg, for example — and having them consume it. Surely that tidbit wouldn't have come up if it wasn't going to happen before the end of the series. Did he give his powers to his son, Topher, in all those waffles he cooked for the kids? To Angela's grandfather, Will Reeves, in that egg he was hard boiling in Angela's bakery? To Angela herself, somehow without her knowing it?

8. Who was Veidt begging to save him?

While trapped on Europa, Veidt spelled out an S.O.S. message with the frozen bodies of dozens of Mr. Phillipses and Ms. Crookshankses. The message read, "Save Me D—" with the rest of the third word cut off in the image shown to viewers. Who was he begging for help? Dr. Manhattan? Dan Dreiberg, aka Laurie's ex Nite Owl? His daughter, Lady Trieu, if that theory of Trieu's parentage turns out to be true?

9. What's up with that horseshoe?

Early in the season, Veidt chafed when Mr. Phillips handed him a horseshoe to cut his cake with. Veidt scoffed that it "wasn't time yet." That horseshoe turned up again in the post-credits scene of the penultimate episode, which a gleeful Veidt found buried in the anniversary cake presented to him in his prison cell. What does it do? Why was it so important? How did Veidt know he would need it later?

10. Where is Looking Glass?

The last time viewers saw "Mirror Guy" was way back at the end of Episode 5, as the 7th Kavalry prepared to invade his home, guns cocked and loaded. Since then, the show has detoured into Hooded Justice's origin story, Angela's past, and a synopsis of her relationship with Dr. Manhattan — but it hasn't checked in again with Looking Glass, other than a brief mention by Agent Petey that he's missing and the 7th Kavalry members who attacked him are dead. Oh, and one of their masks is missing. Under that ink-blot mask, Looking Glass could be anywhere. Where will he turn up next?

11. Will Laurie escape the Kavalry?

Laurie Blake, née Juspeczyk, fought against countless villains in her time — including the literal smartest man in the world, Ozymandias — and came out alive every single time. Surely her life won't end at the hands of a bunch of white supremacists? Now that Dr. Manhattan is presumably being teleported to her location, will she and her ex-boyfriend team up to take the Kavalry down? Will Looking Glass infiltrate the cult and break her out? Will Agent Petey come to her rescue… perhaps in the guise of Lube Man?

12. Will Nite Owl be released?

Of the living members of the original Crimebusters — RIP Captain Metropolis, The Comedian, and Rorschach — only one hasn't yet been seen on the HBO series: Dan Drieberg, aka Nite Owl, the inventor of such police-issue technology as the flying ships and the x-ray night-vision goggles. He and Laurie were arrested together while foiling the Oklahoma City bombing in 1995; she took a deal and became an agent on the anti-vigilante task force, he refused to capitulate and has remained in prison ever since. Senator Keene convinced Laurie to go to Tulsa to investigate Chief Crawford's death by dangling the promise of freeing Dreiberg. Will viewers see the last remaining Crimebuster before the credits roll?

If nothing else gets answered in the finale, this is the one mystery fans absolutely need — nay, deserve — an answer to!

Find out all the answers when the Watchmen finale, "See How They Fly," airs on HBO on Sunday, Dec. 15.

More like this
Linda Ronstadt’s “Long Long Time” Plays A Pivotal Role In The Last Of Us
By Brad Witter
Taylor Swift Visited The 'Glee' Set For This Bizarre Season 5 Episode
By Grace Wehniainen
'The Queen’s Gambit' Season 2 Tweet Wasn’t From Anya Taylor-Joy
By Mary Kate McGrath, Jack Irvin and Grace Wehniainen
Ashton Kutcher Wants Danny Masterson “To Be Found Innocent” In Rape Retrial
By Jake Viswanath
Get Even More From Bustle — Sign Up For The Newsletter
From hair trends to relationship advice, our daily newsletter has everything you need to sound like a person who’s on TikTok, even if you aren’t.