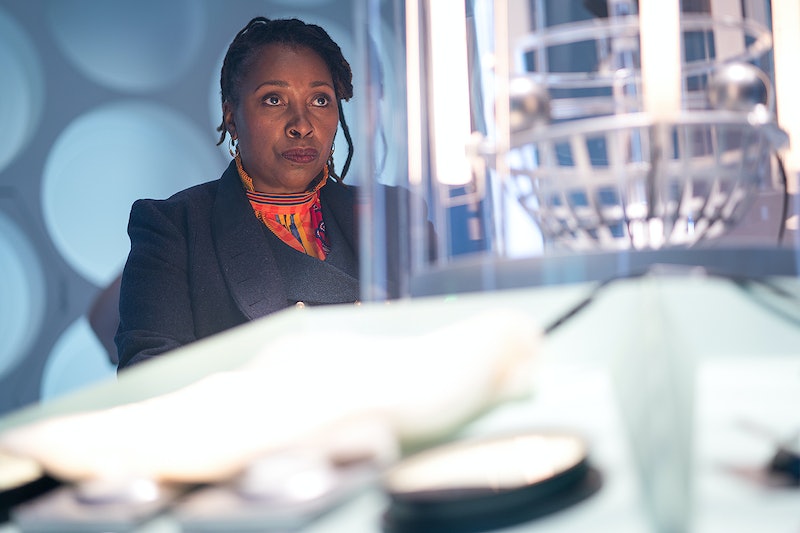 On Jan. 26, everyone's favorite British sci-fi series revealed that Jo Martin would portray the first black Doctor on Doctor Who. To honor the news, we've rounded up 14 sci-fi and fantasy books with black heroines for you to check out, because this Doctor Who news is worth celebrating with a good read.

For anyone who isn't exactly sure what is up with Doctor Who, here's a quick-and-dirty primer. The British TV series, which first began in 1963 and was revived in 2005, follows the Doctor, an alien Time Lord from the planet Gallifrey, who travels through time and space in the TARDIS: a bigger-on-the-inside ship that looks like a blue police telephone box. Time Lords live a long time, because they can periodically "regenerate," taking on a new form. Fans refer to each of the doctor's regenerations using a number, which makes the 13th Doctor, portrayed by Jodie Whittaker, the first female doctor in the show's history.

From the look of things, Martin might be the 14th Doctor, hence the number of books on this list. Jodie Whittaker recently confirmed her return for another season of Doctor Who as the 13th Doctor, and there are still plenty of episodes left in the current season, any of which could spell the end of Martin's run. Still, Martin's casting comes as a pleasant surprise, and that's worth getting more than a little excited over.

Here are 14 sci-fi and fantasy books with black heroines you should read to revel in this great Doctor Who news:

Children of Blood and Bone by Tomi Adeyemi

The first book in breakout author Tomi Adeyemi's Legacy of Orïsha series, Children of Blood and Bone centers on Zélie, a girl determined to bring magic back to her homeland. Years ago, when Zélie was a child, the ruling powers exterminated the maji, including her mother. Now, she lives as a Diviner, a person whose magical abilities could have been so much greater, had the king not slaughtered the maji. A spell that will turn Diviners into maji exists, but Zélie will have to work with the king's daughter, Princess Amari, in order to execute it.

Octavia E. Butler's amazing work of literary science fiction, Kindred, focuses on Dana — a 26-year-old woman who slips backward in time, from modern-day California to 19th-century Maryland, over and over again. In California, Dana has a good life and loving family. In Maryland, she's alone, enslaved on the plantation where her ancestors once lived under similar circumstances. As she travels back and forth in time, Dana begins to piece together a family trauma more than a century old.

This inventive 2019 novel centers on Seske Kaleigh, the future leader of a group of spacefaring humans who live, work, and travel inside the bellies of monstrously huge beasts. The animals must be slaughtered and outfitted for human life, but something has gone wrong this time. Not only that, but Seske's sister has usurped her rightful place at the head of the ship. Seske and her secret lover, Adalla, will have to team up to save their people, but the secrets they uncover along the way force the question of whether or not humanity is worth saving.

Bad Feminist author Roxane Gay takes on the Dora Milaje in Black Panther: World of Wakanda. Known to comic book fans as the Midnight Angels, Ayo and Aneka finally have their origin story told in this series. Not only does World of Wakanda focus on two strong black women, but it was also the first ongoing Marvel Comics series to be written by a black woman.

Nalo Hopkinson's Midnight Robber centers on Tan-Tan, a young girl whose father takes her to New Half-Way Tree, an alternate version of their home world, after he kills her mother's lover in a duel. Life in New Half-Way Tree isn't easy, especially when her father grows violent and controlling. Soon, Tan-Tan herself is on the run, assuming the role of the Robber Queen to protect women in need.

When the zombie apocalypse overtakes the Gettysburg battlefield, the Civil War is put on hold in favor of fighting a shared, new enemy. Born just before the undead emergence, Jane — the black daughter of a white Southern belle — is fated to become an Attendant, a personal bodyguard and companion to the wealthy elite. It's not the life she envisioned for herself, but, then again, neither is becoming an investigator in the disappearance of Baltimore's wealthiest families.

People are dying in the City Enduring. At least one murderer stalks among the city's billions of citizens, killing out of passion — something no one, except for Jo, should be able to experience. Assigned to a world where no one is supposed to feel any emotions, Jo Mullein, a Green Lantern originally from New York, has her work cut out for her in Far Sector, the new Green Lantern series from The Fifth Season author N.K. Jemisin.

Built inside an Appalachian crater, the city of Smoketown outlawed birds and walled itself off from the outside world following a devastating plague. Living in a city preoccupied with its own anxiety, three unsuspecting people — Anna, Eugenio, and Rory — will be thrust together to change Smoketown in ways they could never have imagined.

The eponymous heroine of Nnedi Okorafor's sci-fi trilogy, Binti is the first Himba girl to attend the elite intergalactic university, Oomza U. As their transport moves toward the school, Binti and her classmates find themselves overrun with strange, alien creatures bent on wiping Oomza U. off the map. The sole survivor of the attack, Binti must keep her wits about her if she wants to save herself and the University she gave up everything to attend.

Song of Blood and Stone by L. Penelope

Raised in Elsira, Jasminda looks a lot like people from Lagamiri — her father's people, and the people her Elsiran neighbors despise. When she heals an Elsiran spy captured by soldiers from Lagamiri, Jasminda learns that the magical border separating the two lands is on the verge of collapse. The loss of that border would result in the world being overrun by a tyrant, or so the spy says. But how can Jasminda trust someone working for the people who have never accepted her?

In the wake of a deadly plague, the Gulf Coast has been quarantined and cordoned off from the Outer States in this post-apocalyptic novel from Flygirl author Sherri L. Smith. Life along the coast looks different than it once did, so different that many people in the outside world believe everyone who resides there is dead. But Fen is very much alive, and so is the baby she's been charged with protecting. She wants to get it to the other side of the border before it's too late, but keeping the Fever away from the infant may be nothing more than a pipe dream.

The Deep by Rivers Solomon, with Daveed Diggs, William Hutson, and Jonathan Snipes

Based on the song of the same name by Clipping, Rivers Solomon's The Deep centers on Yetu, a young mermaid responsible for remembering her tribe's history. Born from the pregnant women who jumped from slave ships on the Atlantic, Yetu's people maintain their society by relegating all of the memories of their painful past to a single person. As the historian, Yetu is the only mermaid fated to remember everything, always, but when that responsibility proves to be too much for her, can she find an escape near the surface?

The Intuitionist by Colson Whitehead

What if I told you that a novel about elevator inspectors could be one of the best you ever read? That's the case with The Intuitionist, the 1999 novel from The Underground Railroad author Colson Whitehead. The story here centers on Lila Mae, a young black woman who has just become the newest member of the Department of Elevator Inspectors. As an Intuitionist, Lila Mae susses out mechanical problems through instinct and feeling, a method her data-munching, Empiricist colleagues can't understand.

In a world populated with branded and sequestered supernatural beings, Mixbreed Lanore Vesta is one of the marginalized among the marginalized. She's survived by keeping her head down, but getting involved in a murder-in-progress puts her in more danger than ever before. As the bodies begin to multiply, Lanore goes on the run, searching for safety while she tries to solve the case.

More like this
'Bridgerton' S3 Teases Exciting Social Season For Penelope Featherington
By Bustle
Lib & Will’s Romance In 'The Wonder' Is Very Different From The Book
By Sam Ramsden
The 'Fleishman Is In Trouble' Book Ending Is Still Open To Interpretation
By Grace Wehniainen
This Former Ballerina’s Novel Is Set In The “Seductive, Cutthroat” Dance World
By The Editors
Get Even More From Bustle — Sign Up For The Newsletter