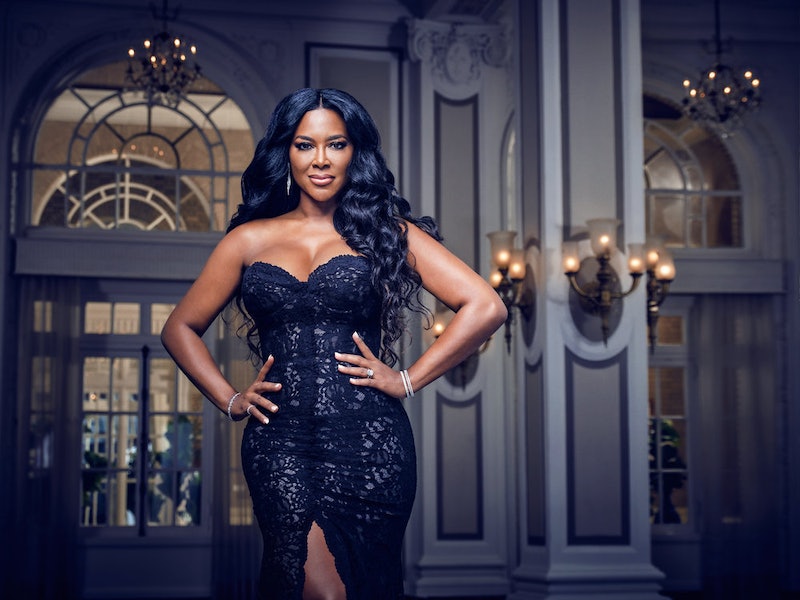 When Kenya Moore announced that she was leaving for Season 11, RHOA fans were devastated. It didn't make sense, especially because Kenya is the woman who always does the most onscreen, whether she's throwing shade or a good party. Luckily, Kenya has returned to RHOA for Season 12, and if these iconic Kenya moments from RHOA are any evidence, the ladies are in for some hilarious (and shady) drama this season.

In hindsight, RHOA truly needed Kenya for Season 11. The last season got off to a super slow start without her. Essentially nothing happened until Porsha Williams and Kandi Burruss went in NeNe Leakes' closet without permission. Up until that point, the Housewives argued about who had the best outfits for many episodes and there was no real drama. That would have never happened if Kenya was around.

The lack of Kenya was truly felt all throughout Season 11. Thankfully, she made a triumphant return with a cameo appearance during the finale episode, despite there being no indication that she would return full time. Luckily, she has, much to Nene's chagrin, for sure.

Love her or loathe her, Kenya is a reality TV icon, something she has demonstrated through her many legendary moments throughout the series. We all remember when Kenya declared she was "Gone With the Wind fabulous" during the Season 5 cast trip in Anguilla, her debut season. That line was instantly iconic along with the twirl she did while she said it.

Nevertheless, that wasn't her only stand-out moment as a Housewife. There are plenty more.

Kim Zolciak showed up to NeNe Leakes' white party and promptly told Kenya that her husband, her hair, and her face weren't real. Kenya clapped back with, "Worry about your life and the daughter that you pimp out for John Legend tickets" and all hell broke loose.

NeNe's attempts to host a civilized gathering went out the door when Kim and Kenya got up from the couches with Sheree holding Kim back from getting physical. Needless to say, Kenya and Kim were never friends after that.

She Took Over Cynthia's Model Casting

On Kenya's first episode, Cynthia Bailey welcomed her by bringing Kenya to help with casting at her modeling agency. But Cynthia couldn't have predicted that Kenya would be the Simon Cowell of the judging panel. Kenya did not hold back with her criticism and she managed to slip the phrase "coochie crack" into almost every critique. She sure knows how to make a... unique first impression.

She Corrected Porsha About Her Pageant Title

Porsha Williams was super shady when she introduced Kenya at a charity event she was hosting, saying that there were "powerful wives and powerful mothers in attendance and Kenya Moore." (Kenya was single and didn't have Brooklyn at the time.) That wasn't even the part that offended Kenya though. When Porsha referred to her as "Miss America," Kenya didn't hesitate to tell her host that she was actually "Miss USA" ... all while Porsha was still giving her speech.

She Made Her Own Workout Video To Spite Phaedra

For a short period of time, Kenya and Phaedra Parks actually did get along. During Season 5, Kenya offered to help Phaedra and her then-husband Apollo Nida produce a workout video. However, Kenya backtracked when she found out that the couple wouldn't pay her for time. Not only did she back out, she made her own workout video instead. Phaedra's video was about getting a "donkey booty," while Kenya one-upped her with "stallion booty."

On the bright side, this meant that the RHOA fans would have multiple options for bovine-inspired reality TV workout videos.

Phaedra made waves when she wore a black, mesh swimsuit cover-up during the cast trip in Anguilla. Kenya used Phaedra's infamous outfit to make a moment of her own when she showed up dressed as Phaedra (complete with butt pads) at a cast event. Once again, Kenya got the last laugh.

She Kicked Porsha Out

When Kenya hosted a Hollywood icons-themed party, she assigned each Atlanta Housewife a character to portray. When Porsha showed up dressed as the wrong person, Kenya was so miffed that she threw her out of the party. Unfortunately for Kenya, Cynthia and Kandi followed Porsha out of the party.

She Brought Props To The Reunion

Kenya went all out for the Season 6 reunion: she came with props. Kenya brought a sceptor and a megaphone to antagonize Porsha, with Cynthia stuck sitting in between them. Porsha got so riled up that things got physical. Porsha literally dragged Kenya across the reunion stage and got kicked out of the taping.

She Announced Her Pregnancy

Andy Cohen started the Season 10 reunion by greeting each Housewife with individually tailored remarks. He asked if a newly married Kenya had plans to have a baby in the future, prompting Kenya to reveal that she was actually at the early stages of pregnancy in that moment. Even her biggest foes on that stage couldn't help being so happy in response to the good news. It was the most heart-warming moment of the reunion by far.

She Was Vindicated From Years Of Apollo Rumors

For years, Phaedra and Apollo spread gossip that Kenya was hitting on Apollo and offered him sexual favors in Los Angeles. Kenya always denied those allegations. Finally, right before he went to prison, Apollo apologized to Kenya and finally admitted that she never saw him in LA and that he actually made up the entire story about her sexual advances. After years of slut shaming, this was a major moment for Kenya.

She Confronted Phaedra About The Mr. Chocolate Rumors

Cynthia tried to confront Phaedra about the rumors that she cheated on Apollo with a man known as "Mr. Chocolate." However, Cynthia was so nervous that she could barely get the words out. That's when Kenya stepped in and accused Phaedra of having an affair. The confrontation got so heated that Phaedra hit Kenya with her purse. It was a truly iconic stand off.

She Shaded Sheree Over Her Unfinished House

Kenya and Sheree Whitfield barely knew each other, but the shade masters went head to head during the Season 8 premiere. They were both building houses on the same street and came up with a lot of home renovation-themed insults. Kenya even rename Chateau Sheree to "Chateau She Can't Pay."

She Threw A "Divorce Party" For Phaedra & Cynthia

Kenya was actually getting along with Phaedra for most of Season 9 until her attempt at a fun party went south when she threw a "divorce party" in honor of Phaedra and Cynthia's upcoming divorces. She really thought she was doing something nice, but the women thought that it was so, so wrong.

She Went Into Sheree's Unfinished Basement

Kenya couldn't help snooping around Chateau Sheree during Sheree's housewarming party. Sheree and Kim were livid when Kenya ventured off into the unfinished basement and as always, it devolved into a screaming match. Kenya called out Sheree for "copying" her light fixtures and she compared Kim's lip injections to duck lips. Who would have though that home renovations could get so heated?

She Made A "Surprise" Appearance At Cynthia's Party

Kenya was not a Housewife during Season 11, but she set the groundwork for an epic return when she appeared during the finale episode. Kenya's presence sent NeNe over the edge because she had no idea Kenya would be there. Cynthia had a hot mic moment, admitting that she was "supposed to pretend like she didn't know Kenya was coming."

NeNe and Cynthia's friendship came to an end and Kenya was the talk of the finale and the Season 11 reunion, making Kenya's short cameo the perfect setup for her Season 12 comeback.