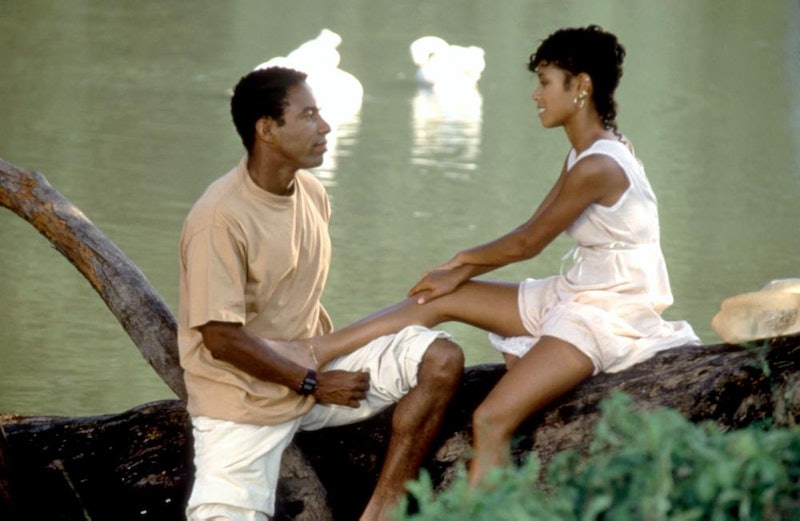 Romantic comedies and dramas are come in all different forms, but movies such as Brown Sugar, Moonlight and Jason's Lyric challenge viewers specifically to see and understand their visions of what Black love and social life can be. As minorities, Black couples and families have to persevere through some life changing — and sometimes even life-threatening — challenges. One thing that stands true is that the power of love has the ability to conquer the most insurmountable odds, no matter the circumstance. That's why taking another look at these films that showcase different types of Black love is so important right now.

Love is a complex word. It can be used to explain romantic feelings, platonic admiration, or the bonds between relatives and chosen families. It has no bounds, doesn't discriminate, and is different for everyone. Pop culture is obsessed with the concept, and it's a part of almost every narrative we've ever seen on screen. These movies are special because they explore a specific experience from many different angles. They're proof that having all different kinds of viewpoints on screen is essential to our culture.

These 14 movies are just a start, but they include some of the best depictions of Black love that film history has to offer.

The classic 1994 film, Jason's Lyric, is a movie that shows the nuance of Black love in many examples. Jason (Allen Payne) dreams of having a better life and loves his family deeply. He works as a TV salesman trying his best to help his mother and steer his recently incarcerated brother Joshua (Bokeem Woodbine) onto the right path. In his attempts to do better, Jason finds love and joy when he meets Lyric (Jada Pinkett). As their feelings for each other develops, Jason starts to see a future for himself, but is also confronted with the secrets of his past.

Sometimes the purest forms of romantic love grow from friendships. Brown Sugar explores the evolving relationship of childhood friends Sidney (Sanna Lathan), a thriving music editor always on the hunt for a good hip-hop centered story and Dre (Taye Diggs), who's starting to feel unfulfilled as a music executive. Both come to realize that their true passion was also the root of their love for one another.

The Oscar-winning film Moonlight is proof that it's vital to diverse representations of different Black lifestyles and relationships onscreen, encouraging open conversation about Black male sexuality.

Fences is a movie that disrupts the way we look at Black fatherhood and the role it plays in the development of a young Black man's personal growth. Denzel Washington plays a father who once dreamed of becoming a professional baseball playe, but became very bitter and takes his frustrations out on his son (Jovan Adepo). Through the intense portrayal of this father-son relationship, Fences shows that a father's misguided hurt was a complex way of showing his tough love.

Two best friends (Taye Diggs, Morris Chestnut) who've gone through practically everything in life together find out that there is a huge secret that will divide their bond. This film shows the how close Black male friendships can stand life's trials.

Poetic Justice is all about letting love back into your life after grieving a loss. Justice (Janet Jackson) writes poetry to deal with the pain of the death of her boyfriend. Then Justice meets Lucky (Tupac Shakur) and grows close to him, but she soon begins to question the matters of her heart and tries to figure out if she is open to love again.

Claudine (Diahann Carroll) is a mother of six who is forced to hide her new lover in order to keep her welfare benefits. Matters get even more complicated when her children oppose her new relationship, her daughter gets pregnant, and she's soon faced with a marriage proposal. Claudine takes on some very tough subjects in the form of comedy to show the touch choices a mother has to make for the sake of her family.

Mahogany is a tale of ambition, love, and feeling conflicted by the two. Diana Ross plays a woman torn between following the dreams she's had for most of her life and supporting the man she's in love with. In the movie, a lot of her choices lead to heavy consequences that she can not ignore.

Queen Latifah plays a physical therapist who ultimately falls in love with a basketball player client (Common), and Just Wright shatters society's assumption that only a certain type of woman is worthy of love.

The Color Purple is still one of the most important movies to display how deep Black sisterhood and friendship can run. In the '40s, Celie (Whoopi Goldberg) undergoes personal evolution in the midst of dealing with an abusive husband (Danny Glover), racism, and the loss of her children. She blossoms into a stronger person through the help of other women.

She's Gotta Have It is set in the late '80s and all about a young Black woman named Nola Darling (Tracy Camilla Johns) who is unapologetically balancing three lovers. It's up to her to define her life, not live up to a monogamous ideal.

Precious, the film adaptation of the novel Push by Sapphire, focuses on the struggle of an illiterate teenage mom (Gabourey Sidibe) whose ambition to live a better life comes from a very determined teacher (Paula Patton). This film shows how a mentorship can help someone find the strength to break free of a harmful situation.

In Hidden Figures, three African-American women at NASA — Katherine Johnson (Taraji P. Henson), Dorothy Vaughan (Octavia Spencer) and Mary Jackson (Janelle Monáe) — serve as the math brains behind space exploration. Although they all face discrimination and racism, these three women love each other even when circumstances could've ripped them apart.

It's important that we see movies that explore our community and how we see the world. So watch or re-watch these films and gather your own thoughts about what Black love means and symbolizes to you.

More like this
What’s New On Netflix: A Victoria Justice Rom-Com & The Return Of David Letterman
By Arya Roshanian
What’s New On Netflix: The Return Of 'Bling Empire' & A Rebel Wilson Comedy
By Arya Roshanian
You Can Thank 'Spider-Man' For The Meme-ification Of Movies
By Dana Schwartz
Here's How To Practice Self-Love In Small Ways Every Day
By Mackenzie Sylvester
Get Even More From Bustle — Sign Up For The Newsletter