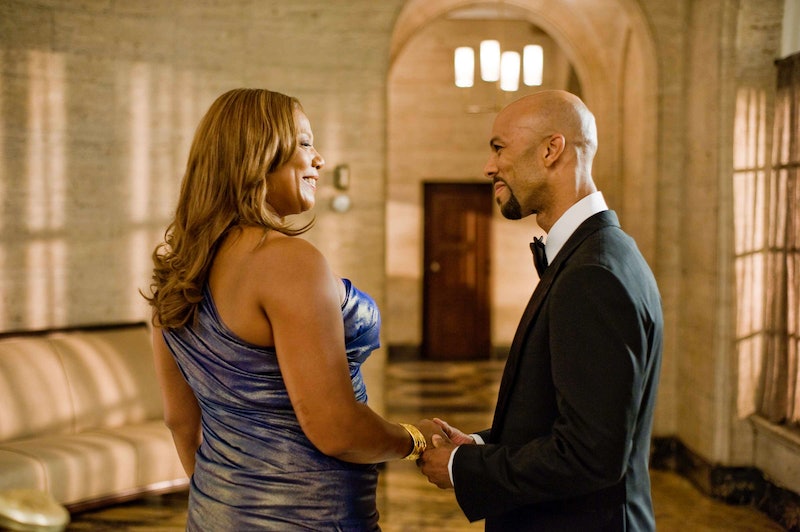 As a romantic sap, I watch as many love stories as I can get my hands on. And while I try to diversify my movie viewing here and there, I always find comfort in my Black romance movies. The representation of Black love is important, and society needs to see the vast variety of our love narratives as frequently as they can. Like all people, we love in every form and expression, and something radical happens when we see our stories onscreen drenched in rich, melanin, perspective.

No love story is perfect, though, and that's why I find myself adoring and relating to movies like Beyond The Lights, Just Wright and Love & Basketball, which don't show romance as a simple thing, but something that takes work and can sometimes end sadly. Other movies on the list are more joyful, showing characters reveling in their feelings for each other. Each of the films on this list is a must-see and a reminder of just how complex love and romance can be.

So, without further ado, here are 18 of the funniest, most heartfelt, and most loved romance Black films around, from ensemble comedies to poignant dramas and everything in between.

1. Two Can Play That Game

This movie is a prime example of why looking for revenge is typically not the best idea. Shante Smith (Vivica A. Fox) has a happy relationship with her boyfriend Keith Fenton (Morris Chestnut), but it's tested when she sees him out with one of his female co-workers. She creates a “10-day plan” to get her man back in check, but it backfires when he catches on to her.

Carmen (Dorothy Dandridge) is a passionate, sexy woman who lures a handsome soldier named Joe (Harry Belafonte) away from his girlfriend, played by Olga James. However, Carmen soon gets tired of Joe and drops him for someone else. This love triangle will have you on your toes for the entire runtime.

Pop superstar Noni (Gugu Mbatha-Raw) struggles with superstardom and not having a say in where her career goes. She tries to take her life, but a cop named Kaz (Nate Parker) stops her. Kaz ends up helping her find her voice and authentic self.

Stream Beyond The Lights here.

One reason to watch this movie: Tupac. This movie shows just how talented the late rapper really was as an actor. Tupac plays a know-it-all mail man named Lucky who falls in love with a hairdresser, Justice (Janet Jackson), who loves finding poetry in her everyday life. Their two performances combined result in cinematic magic.

Monica (Sanna Lathan) and Quincy (Omar Epps) are not afraid to compete with each other, on and off the basketball court. Despite all the messy drama that happens between the two, in the end, their mutual love for basketball is a testament to their love.

6. How Stella Got Her Groove Back

40-year-old, recently divorced Stella (Angela Bassett) is looking to get away from the routine of her everyday life. So she and her friend Delilah (Whoopi Goldberg) plan a trip to Jamaica to soak in some sun. On her travel adventure as a single woman, Stella finds new love with a handsome 20-something (Taye Diggs).

Stream How Stella Got Her Groove Back here.

7. Their Eyes Were Watching God

Based on Zora Neale Hurston's novel of the same name, Janie Starks (Halle Berry) vacillates between temptation and her moral code when she falls in love with a young man named Tea Cake (Michael Ealy).

Something New is about a beautiful, unexpected love affair between Kenya McQueen (Sanaa Lathan) and free-spirited landscaper Brian Kelly (Simon Baker). This film pushed the envelope in Hollywood by tackling the intricate hurdles of interracial relationships and Black class.

Sidney (Sanaa Lathan) and Dre (Taye Diggs) have shared a love of hip hop since the beginning of their friendship as children in Brooklyn — but they also have a love for one another, as they discover during the film.

Eddie Murphy stars in this romantic comedy as a playboy who is trying his best to make a good impression on his new boss, played by Robin Givens. Soon enough, his tried-and-true methods are tested when a new woman (Halle Berry) comes his way to out-play him.

This movie will make your heart melt over and over again. The chemistry between Darius (Larenz Tate) and Nina (Nia Long) is undeniable, and Love Jones explores the idea that it's often hard to know if the connection between two people can go evolve from friendship to romance.

Leslie (Queen Latifah) is a physical therapist who falls for her pro NBA client Scott (Common). However, everything isn't love at first sight for these two. Scott only realizes his love for Leslie after taking her out of the friend zone and being dumped by her cousin Morgan (Paula Patton). If you're a true love underdog, this movie is for you.

Jason (Allen Payne) battles with the street life and his feelings over falling in love with the older Lyric (Jada Pinkett-Smith). He finds himself trying to help his brother stay on a straight path after getting out of jail, while also realizing that "love is courage" in his unpredictable life.

Eva's (Gabrielle Union) family pays Ray (LL Cool J) to date her, but what begins as an arrangement becomes something much more serious when the two actually fall madly in love.

Stream Deliver Us From Eva here.

This 1999 comedy will have you reminiscing about college and your old flames from that time. In The Best Man, college friends come together for the wedding of Mia (Monica Calhoun) and Lance (Morris Chestnut), and memories are brought up through Harper Stewart's (Taye Diggs) new book, which causes a lot of ruckus.

A couples retreat is the site of major trouble in this comedy with a star-studded cast, including Janet Jackson, Tyler Perry, Malik Yoba, and Jill Scott. The movie explores the reasons why married couples make the decisions to stay together through some of life's most difficult circumstances.

Stream Why Did I Get Married? here.

17. A Thin Line Between Love And Hate

Ladies' man Darnell Wright (Martin Lawrence) is used to getting any woman he wants. Even though he really loves Mia (Regina King), he can't help himself when he meets a rich woman named Brandi (Lynn Whitfield). After trying to ditch Brandi, though, Darnell is in for a dangerous ride when it turns out that Brandi will do anything to get revenge.

Stream A Thin Line Between Love and Hate here.

In this film, four friends, played by the late Whitney Houston, Angela Basset, Loretta Devine, and Lela Rochon, all try their luck at finding love. For two of them, it's all about finding self love, while the others find out what true romantic love really entails.

A lot of the time, we find ourselves relating to movies that speak to our core experience, no matter how ridiculous the storylines may be. From the serious to the wild, these movies prove how much representation matters in every genre.

This article was originally published on April 10, 2017