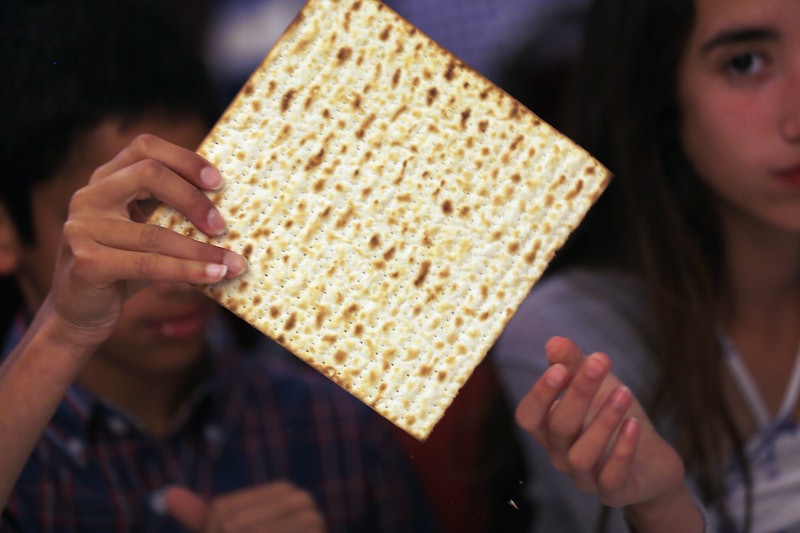 If you're having trouble getting into the Passover spirit this year because spring feels a lot like winter and the frigid temperatures are disorienting you, perhaps these Passover quotes that you can share with friends and family will get you in the mood. By reading some quotes about the sacred holiday, you can get your mind into the holiday so that by the time the seder rolls around, you're feeling the spirit of Passover.

Though the date that Passover is observed changes each year, it always comes a week after Easter Sunday, and lasts for seven or eight days (depending on your faith). The holiday commemorates the Israelities' emancipation, led by Moses, from slavery in the Pharaoh's ancient Egypt. It was a freedom that came at no small cost over 3,000 years ago: As the story goes, after Moses made many attempts to convince the Pharaoh to free his people, he received a helpful message from God in the form of a burning bush. God told Moses that he would send a slew of plagues to Egypt to taunt the Pharaoh until he let the people go. Flood, frogs, gnats, flies, blight of the livestock, boils, hail, locusts, and darkness came to Egypt, but the Pharaoh did not budge. But just before God enacted the last plague — the death of the first born — he told the Jews to mark their doors with lamb's blood, so that he knew to "passover" their homes and spare them. At this point, the Pharaoh finally told Moses that his people could be free. They left in such a hurry, the bread they were making didn't have time to rise. (That's why, during Passover, we eat unleveled bread — to show our appreciation for this plight, and to commemorate their struggles to be free.)

Because Passover is such a holy holiday, there are tons of passionate and enlightening quotes about freedom and the power of perseverance. Here, I've put together a list of some of my favorites. Use them for cards, greetings, and toasts during Passover this year.

"Bitter is wine, but it sweetens all bitterness." - Moses Ibn Ezra

"The Seder nights... tie me with the centuries before me." - Ludwig Frank

"...proclaim liberty through all the land and unto all the inhabitants thereof..." - Bible, Leviticus 25:10

"Passover affirms the great truth that liberty is the inalienable right of every human being." - Morris Joseph

"Freedom is within our grasp, and Pesach reminds us that we need to reach.” - Rabbi Bradley Shavit Artson

"Passover is a time of reflection and joy. When we emerge from our cocoon of doubt to fly freely on the wings of faith." - Unknown

"The willingness to sacrifice is the prelude to freedom." - Unknown

“This is true freedom: Our ability to shape reality. We have the power to initiate, create and change reality rather than only react and survive it." - Yaacov Cohen

"The religious act is done reverently and lovingly in gratitude for the ancient redemption, and thus becomes a type of the deep religious emotion with which that memorable event ever fills the pious heart." - Morris Joseph

"The cause of Freedom and the cause of Peace are bound together." - Léon Blum

“Passover and Easter are the only Jewish and Christian holidays that move in sync, like the ice skating pairs we saw during the winter Olympics.” - Marvin Olasky

"The exodus from Egypt occurs in every human being, in every era, in every year, and in every day." - Rabbi Nachman of Breslov

“Get rid of the old leaven of sin so that you may be a new batch of dough — as you really are.” - Bible, I Corinthians 5:7