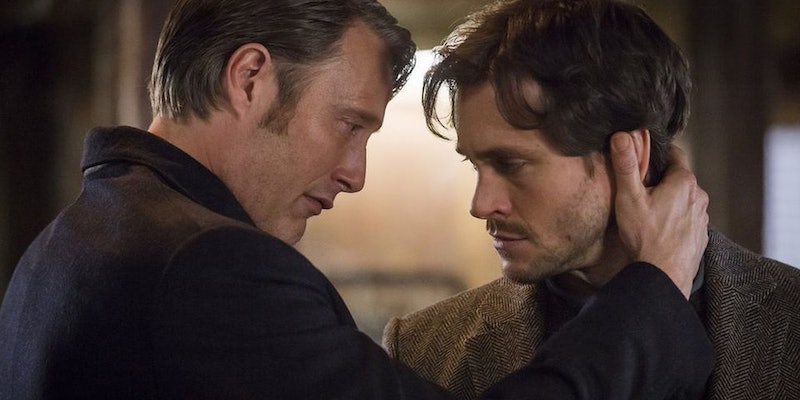 This Feb. 14, you can turn on some sappy romance like Titanic, Shakespeare In Love, or (god forbid) even Garry Marshall's sappy holiday-themed ensemble rom-com Valentine's Day. Or you can take a road less traveled, and stream something from this list of unusual TV shows to watch on Valentine's Day. I know, I know; the Feast of Saint Valentine is typically a time for grand romantic gestures involving roses and chocolate and an entire Bed, Bath & Beyond's worth of Yankee candles. But consider the fact that sometimes the most surprising romantic gesture of all simply involves a couch, a pint of Ben & Jerry's, and your favorite episode of Game Of Thrones.

The selections on this list steer clear of the dreaded "very special Valentine's Day" sitcom episodes that you'll find in abundance on shows like Friends, The Office, Modern Family, and Parks And Recreation. Rather, they're shows that you wouldn't necessarily think of when picturing your ideal Valentine's evening… but each of them are perfect for the holiday in their own unique way, from the drama about cheating spouses to the show about alien-chasing FBI agents. So grab your loved one, grab the remote control, and marathon one of these 14 series, in honor of Feb. 14.

Although the title might make it seem like a steamy, sordid look at forbidden love, this Showtime drama is actually a psychological examination of the fallibility of memory and a dark look at what people do to the ones they claim to love. In other words, the perfect antidote for a saccharine holiday.

Although this AMC series may feel more relevant than ever thanks to its plot about Russian agents infiltrating the American government, The Americans has always been just as much about marriage as it is about spy craft. The relationship between Philip and Elizabeth Jennings speaks volumes about the performative aspect of marriage, the lies we tell our spouses, and the compromises we make to keep our relationships afloat.

The popular HBO fantasy series may most infamously be known for its gory death scenes, but it has also played host to a fair share of swoon-worthy romances over the years: Daenerys and Khal Drogo, Robb Stark and Talisa, Jon Snow and Ygritte… Sure, all of those romances happened to end in one of those aforementioned gory deaths — but they were sweet while they lasted.

You don't even have to default to one of the musical dramedies Valentine's Day episodes — "Silly Love Songs," "Heart" — to get a full dose of the spirit of the holiday. Every episode of Glee is jam-packed with the sugary sweetness of V-Day, the outsized emotions of teenage relationships, and at least one or two sweeping love ballads.

There's a reason the first three seasons of Netflix's political drama premiered on or near Valentine's Day. There's something about the icy relationship between Macbethian power couple Frank and Claire Underwood that feels both so subversive and so perfect for the lovey-dovey holiday. The Underwoods may not always like each other… but they have a deep respect for each other, and, when they're united, nothing can stand in their way.

Sure, smoke monsters and time-hopping castaways and disappearing islands might not be the first thing that comes to mind when you think of Valentine's Day-appropriate material. But I challenge you to find a single episode of any show — sci-fi, drama, comedy, procedural — that's more romantic than the Season 4 episode "The Constant," in which Desmond reached across time, space, and consciousness to reconnect with the love of his life, Penny. I'm already feeling verklempt just thinking about it.

Of course, when it comes to the combination of romance and sci-fi, no show that's currently on television does it better than Starz's time travel/period drama bodice-ripper. Many misfortunes have befallen Claire and Jamie over the course of two seasons, but no matter what happens, they'll always be there to comfort and heal and love one another.

Before showrunner Bryan Fuller brought us Hannibal, he brought us this confection. As bright and optimistic as the other was dark and cynical (though not without its own macabre undertones), Pushing Daisies found a way to make the tired will-they-won't-they trope exciting again. Ned has the ability to bring people back from the dead with one touch — but another touch will send them back to death for good. So he and his resurrected childhood sweetheart Chuck literally can't touch… lest he lose her forever.

There are definitely more political machinations and torture and murder in any given episode of Scandal than you'll find on your typical date night (at least, I hope). But given the amount of all-white outfits and glasses of wine and burning candles Olivia Pope constantly surrounds herself with, you'd think she was living her life in some sort of perpetual, never-ending Valentine's Day. Real Gladiators don't mind a little tooth-pulling with their romantic holiday, anyway.

This Lifetime drama has sismances spades. Doing for relationships between women what Hannibal did for ones between men (minus the eroticism and plus a healthy does of Machiavellian manipulation) there's nothing juicier than this backstage look at reality television. Plus, the show-within-a-show — a send-up of The Bachelor called Everlasting — gives the drama an appropriately romantic, rose-strewn setting.

You can keep your Ross and Rachel, your Sam and Diane… My OTP will forever and always be Mulder and Scully. It's hard to beat the chemistry that David Duchovny and Gillian Anderson built over the course of 10 seasons and 208 episodes. Plus, some of the scarier episodes will give you an excuse to cuddle even closer on the couch. Best of both worlds.

Now that you've got plenty of options, cue up the DVR or turn on Netflix or pop in that well-worn box set… and have yourself a very happy Valentine's Day indeed.