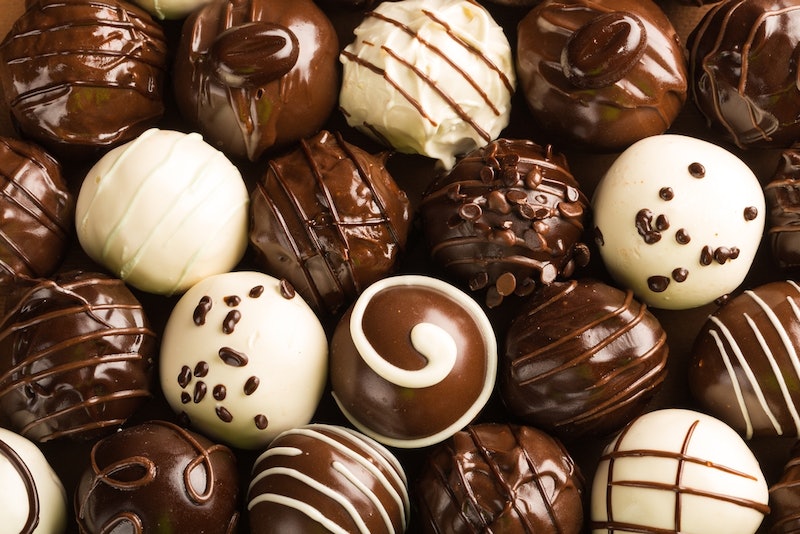 If you feel like every other day is a little "holiday" dedicated to a specific type of food, you aren't really wrong. These days of celebration are getting more and more common, and after a while, it can feel almost overwhelming. But one holiday that will never get old is National Chocolate Day, which falls on Sunday, Oct. 28 this year. Who could get tired of a day that is all about the best candy in the world? You can spend the day eating whatever variation of chocolate you want: your favorite candy bar, truffles, hot chocolate, fruit dipped into melted chocolate, a simple piece of dark chocolate... the possibilities are pretty endless. While you're doing that, you can enjoy some of the funniest quotes about chocolate for National Chocolate Day. They can end up as an Instagram photo caption or just be put on any of your social media accounts - or simply read for fun!

After all, chocolate does deserve more acknowledgement than simply thinking about how delicious it is. It has basically been around forever. While we don't know who invented it or exactly how it became as popular as it is today, we do know some things. Researchers believe that it's been around since 1500 B.C., where they believe the ancient Olmec tribes used cacao for a ceremonial drink. It was the Central American Mayans who really made chocolate more popular, as they revered it and used it in many celebrations and important transactions. Who can really blame them?

In 1641, chocolate arrived in the United States, in Florida, on a Spanish ship. Researchers believe that the first American chocolate house opened in Boston in 1682, and by 1773, cocoa beans were a huge import. During the Revolutionary War, it was even sometimes given to soldiers as payment instead of money.

There's a lot to say about chocolate, but for now, let's focus on the things that will make us smile. Below are a few of the funniest quotes about chocolate that are out there: