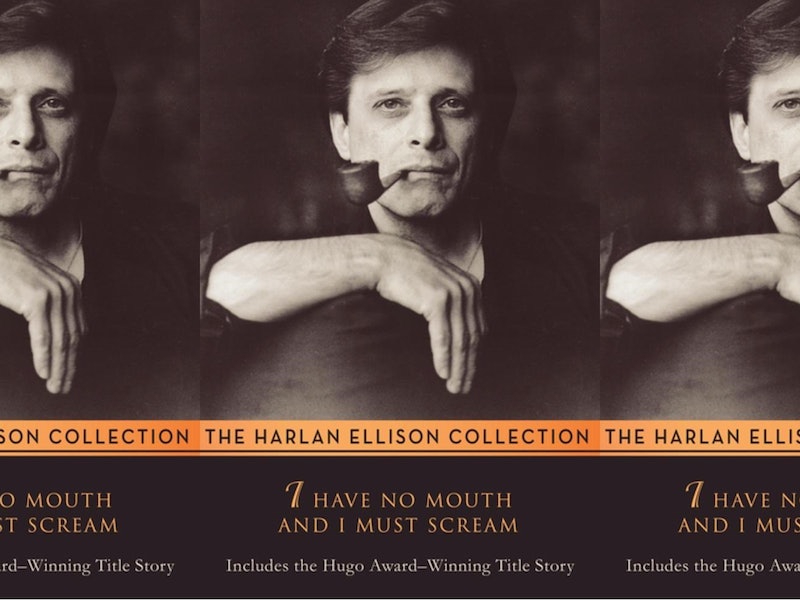 The world lost another great writer on Thursday, when science-fiction writer Harlan Ellison died in his sleep at the age of 84. To celebrate his life and legacy, I've picked out 15 great quotes from Harlan Ellison for you to remember him by.

Harlan Ellison was the author of nine book-length works, more than two dozen short-story collections, and nine works of nonfiction. His most famous stories are "I Have No Mouth, and I Must Scream" and "'Repent, Harlequin!' Said the Ticktock Man," and his 1969 novella, A Boy and His Dog, was made into a film in 1975.

Over the decades he worked as a writer for print and the screen, Harlan Ellison garnered a reputation as a cantankerous and combative creative force. He was fired from Walt Disney Studios on his first day, but went on to be involved in the production of a number of famous sci-fi TV shows, including Star Trek, The Outer Limits, and The Twilight Zone. Ellison's work on Star Trek was the source of much Hollywood drama, with writers on the show changing his teleplay to remove anti-war messages from the episode "City on the Edge of Forever," and he sued CBS Paramount Studios "seeking revenue from merchandising and other sources from the episode," which aired in 1967, in 2009. Ellison also filed suit against the creators of two films — Future Cop and The Terminator — alleging that they infringed upon his original ideas. The author won all three cases.

The following 15 quotes represent some of the best, wittiest, and most insightful moments in Harlan Ellison's work:

More like this
'Mayfair Witches' Already Changed 2 Major Characters From The Books
By Grace Wehniainen
Your Guide To Watching 'Everything Everywhere All At Once' In The UK
By El Hunt and Sophie McEvoy
Twitter Is Identifying With Sally Field & Jane Fonda’s Friendship In New Viral Video
By Jake Viswanath
25 Inspiring Quotes From Black Women To Celebrate Black History Month
By Kyli Rodriguez-Cayro and JR Thorpe
Get Even More From Bustle — Sign Up For The Newsletter
From hair trends to relationship advice, our daily newsletter has everything you need to sound like a person who’s on TikTok, even if you aren’t.