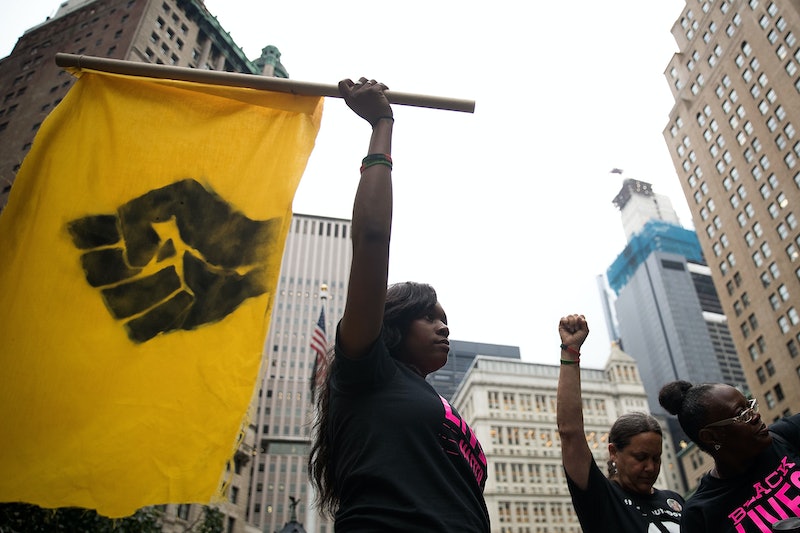 Today, thousands of people are marching through Washington, D.C. to show their support for racial and gender equality. The March for Black Women and the March for Racial Justice will converge on the National Mall in order to combat the racism, sexism, segregation, white supremacy, and oppression that has plagued our country since its inception. The photos that are already coming out of the event show how important it is to just show up to marches and demonstrations like these.

"We want to bring awareness to the country, specifically white America," the March for Racial Justice's co-founder Dorcas Davis told CNN. "In the U.S., things are still very segregated. They may not know other Americans are being affected and their rights are not being upheld."

Davis said organizers began planning the march back in June, when Minnesota police officer Jeronimo Yanez was acquitted for shooting and killing Philando Castile during a traffic stop in July 2016.

“The reality is that these are everyday occurrences,” Davis said. “Charlottesville was horrific, but it’s not every day like that in Charlottesville. But for people of color, it’s like this every day.”

The March for Black Women was planned to coincide with the March for Racial Justice, because its organizers felt that in the past, marches for racial and gender equality, like the Women's March in January 2017, didn't focus explicitly enough on the unique issues and challenges Black women face, like domestic violence, high rates of incarceration, and unequal pay.

"There is no racial justice without gender justice," Davis said. "There was a need to create space for Black women." ​Organizers for both marches say the process has been entirely collaborative.

The date of the marches has come under criticism because Sept. 30 is also Yom Kippur, the holiest day in the Jewish calendar. Originally, organizers intended to hold the march on Sept. 9, to honor the Stono Rebellion, the largest slave rebellion in the U.S. But when the National Park Service told them the National Mall was not available that day, they changed the date to September 30th, the anniversary of the 1919 Elaine Massacre in Elaine, Arkansas, when over 200 Black men and women were killed for demanding better pay for sharecroppers.

"Choosing this date, we now know, was a grave and hurtful oversight on our part," reads a statement on the march's website. "It was unintentional and we are sorry for this pain as well as for the time it has taken for us to respond. Our mistake highlights the need for our communities to form stronger relationships."

In order to correct their oversight, organizers have planned sister marches for Sunday, Oct. 1 as well, including one in New York City, to allow observant Jewish women to participate.

Here are some of the photos from the March for Racial Justice and the March for Black Women in Washington, D.C. today that show silence and complacency aren't options, regardless of your race, gender, or creed. To see more, check out the hashtags #M4RJ and #M4BW on Twitter and Instagram.