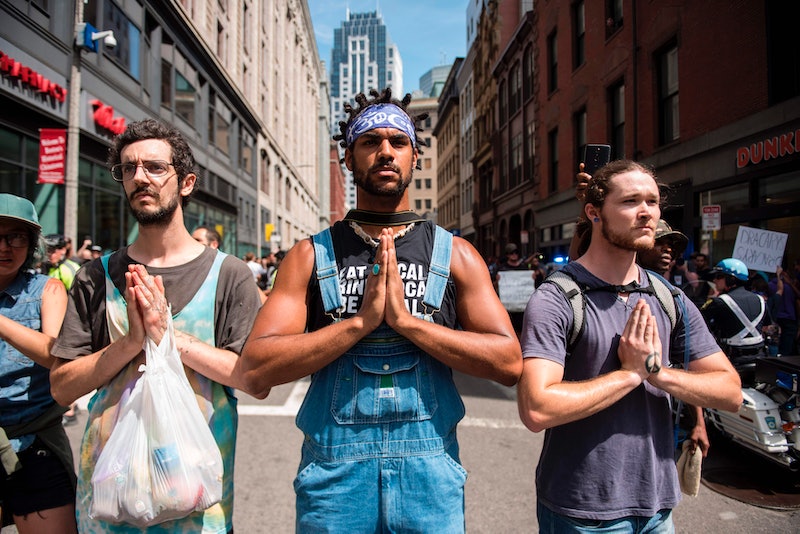 On Saturday, Sept. 30 in Washington D.C., the March for Racial Justice will take place as anti-racist activists convene at the country's capitol. According to the march's mission statement, participants will call for the "reversal of laws, policies, and practices that hasten inequality, dehumanize people of color, and maintain white supremacy."

"I started the March for Racial Justice because I watched for the last six years my father battle the New York City court system for justice against police brutality," Dorcas Davis, co-founder of the event, said in a promotional video for the march. A breaking point for her and her co-chairs was when the Minnesota police officer who killed an unarmed black man, Philando Castile, during a routine traffic stop was acquitted of all charges in June 2017.

"I just remember feeling really upset and outraged and hopeless because I just couldn't stop thinking about this young man who everyone seemed to love in his town, and he was shot in front to his little girl and his partner and I had to do something," Andrea Ciannavei, co-chair of the March for Racial Justice, said in the promotional video. "I can't not do something." Her hope for the march is that it will "bring as many people together as possible to show up for each other... and end white supremacy."

The march will start at Lincoln Park on Capitol Hill on Saturday around 10 a.m. EST It'll be joined by the March for Black Women around 12:30 p.m. EST, whose participants are marching because "black women's issues are racial justice issues," the march's mission statement reads. While black women are killed at the same rate as black men and children, their deaths often go unreported.

"We will march together toward the Capitol and then past the Department of Justice, before culminating at the National Mall between 4th and 7th Streets," the March for Racial Justice's site states. "A vigil at MLK Jr. Memorial will happen at sundown."

While the group faced criticism for holding the event during the Jewish holiday Yom Kippur, organizers recently apologized, saying, "Our mistake highlights the need for our communities to form stronger relationships.”

Racial injustice in America has been at the center of a national debate ever since the Black Lives Matter movement drew attention to police brutality and the lack of accountability for officers who fatally shoot unarmed people of color while on duty. Black people are shot and killed by police at more than two-times the rate of white people, according to an analysis by The Washington Post.

Former San Francisco 49ers' quarterback Colin Kaepernick started kneeling during the national anthem in August 2016 to protest police brutality. "I'm not going to stand up to show pride in a flag for a country that oppresses black people and people of color," he told NFL Media.

Kaepernick's protest was thrust into the spotlight recently after President Donald Trump condemned NFL players who participated, calling anyone who knelt a "son of a b*tch."

Trump has notably taken a very weak stance against white supremacy, calling some neo-Nazis at a violent rally in Charlottesville in August "fine people." There has also been a rise in hate crimes since Trump took office, according to a report from the Southern Poverty Law Center.

The March for Racial Justice organizers are working with Bus.com to provide discounted rides for participants — you can organize group transportation at m4rj.bus.com — and has provided a list of housing options on its website. You can find out how to get involved in the marches here and here, or shop the March for Racial Justice store to support the group or make a donation.