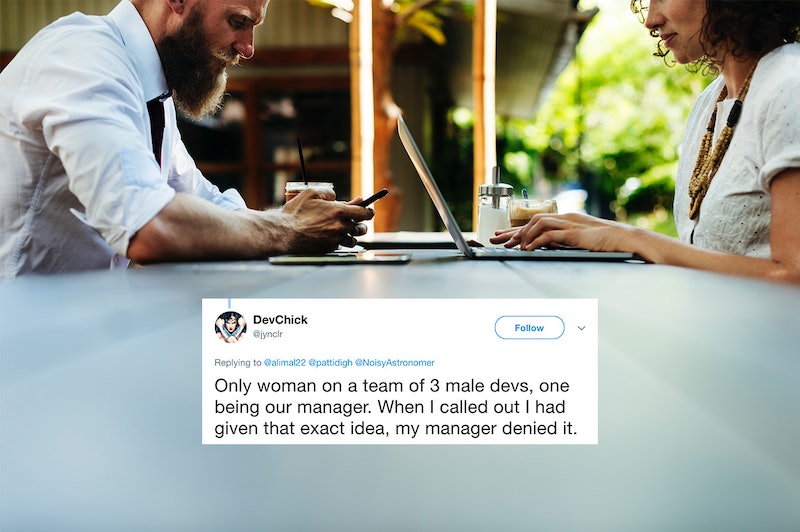 "Hepeated": it's the latest word in the English language to make every woman collectively say, "Omg, yes." Hepeating happens when you suggest an idea that's ignored, only to be welcomed with open arms when a man later repeats it. The concept is nothing new; but the instant the word hit the web, everyone sort of fell in love/went crazy, and now stories about women being hepeated by men are flooding Twitter.

It was Nicole Gugliucci — social advocate and professor — who hopped on Twitter with news that her friends had coined the delightfully witty yet oddly accurate word; and I don't think we've been able to relate this well since "mansplaining" made its first appearance. As women, most of us can remember a time at home or at work or in school when we pitched an idea that received a lukewarm reception but somehow became brilliant when a man later suggested it.

Of course, we don't usually speak up when something like this happens — because nothing exacerbates the stereotype of the overly emotional, hyper sensitive female like saying, "That was my idea first!" Nevertheless, receiving confirmation that your thoughts are only worthy when uttered from the lips of a man is a real kick in the ovaries.

The word resonates with us, to say the least, and Twitter has had so many feelings that we just couldn't hold it in anymore. Countless women have found themselves on the rotten end of hepeating — and it occurs as subtly and naturally as mansplaining that we have a hard time getting people to notice it. Sometimes, people don't mean to hepeat, which is why we should bring it to their attention. Sometimes, people intentionally hepeat, which is why we should definitely bring it to their attention. It's gotten out of hand.

See the madness for yourself.