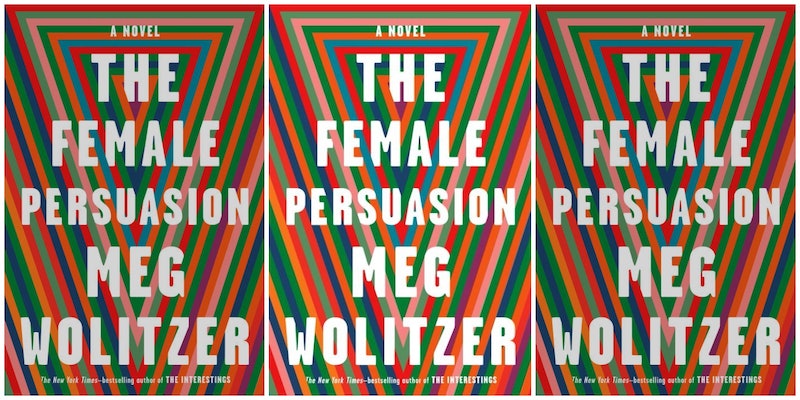 "I think there are two kinds of feminists," Greer's best friend, Zee, tells her near the end of Meg Wolitzer's new novel The Female Persuasion. "The famous ones, and everyone else." There's much to be discussed in this new novel, but Zee's fiery retort signifies one of the most important points: In the age of "empowerment feminism" — Nasty Woman shirts, pussy hats, "The Future is Female" needlepoints — how can we separate what's making a difference from what's just making noise? And are those necessarily different things?

Wolitzer's 12th novel centers on Greer Kadetsky, a shy but ambitious writer, who lands her first post-college job at feminist icon Faith Frank's new foundation, and falls into a complicated mentor-mentee relationship that challenges Greer's conceptions both of the feminist movement and her role in it. The novel also circles the narratives of three people in Greer's orbit: Faith, who's spent a lifetime trying to discern what good her work is actually doing in the world; Cory, Greer's boyfriend who's rocked by a tragedy that forces him to give up a promising finance career and move back home to care for his mother; and Zee, Greer's college roommate who's constant search for a livelihood that feeds her activist spirit has taken her life in an unexpected direction.

I didn't feel completely exhilarated after finishing Meg Wolitzer's novel, but I did feel a little bit more hopeful than I did when I began. The problems she addresses are very real, and many of them stand very much in the way of real change. The topic of privilege, for example, is addressed with a refreshing delicacy. It is made exceedingly clear that the two characters with the least amount of privilege — Cory, who's the child of working-class Portuguese immigrants and Zee, who's gay — are both diligently and silently living out their feminism in a way that arguably has more day-to-day impact than Faith or Greer's work.

Meg Wolitzer walks you through the labyrinth of four disparate minds with the precision and honesty that have made her one of the most beloved and insightful novelists of her generation. When you emerge from this story, you might just have a better sense of the myriad personalities and experiences and privileges that compromise the colorful schema of modern day feminism, but you probably won't have all of the answers to the challenges raised — intentionally or otherwise — by its author. Maybe, like me, you'll walk away with more questions, and maybe that isn't a bad thing. The weight of feminist work isn't always quantifiable, and the only "win" anyone should be working towards is full equality for everyone, not fame.

Before you pick up the book, here are 15 quotes to get you excited for the latest from Meg Wolitzer:

1. "Throw yourself into new experiences," Faith went on. "Why not try to use your 'outside voice'? You know, I sometimes think that the most effective people in the world are introverts who taught themselves how to be extroverts.'"

2. "'I see. So you're quiet but you're also furious,' she said. 'It seems like it's very hard for you to keep asserting yourself. But you're doing it anyway, because you want to find meaning, is that right?' Greer hadn't thought of it that way, exactly. But as soon as Faith said it, she understood it to be true. She wanted to find meaning. That had been the missing piece, or one of them. 'I admire that,' said Faith. 'I admire you.'"

3. "'I do it for women. Not everyone agrees with the way I do it. Women in powerful positions are never safe from criticism. The kind of feminism I've practiced is one way to go about it. There are plenty of others, and that's great. There are impassioned and radical young women out there, telling multiple stories. I applaud them. We need them. We need as many women fighting as possible. I learned that early on from the wonderful Gloria Steinem — the world is big enough for different kinds of feminists to coexist, people who want to emphasize different aspects of the fight for equality. God knows the injustices are endless, and I am going to use whatever resources are at my disposal to fight in the way I know how.'"

4. "'So it's all starting for you,' said Zee. 'Remember this moment. Take a snapshot of it in your brain.'

'What moment is that?'

'Which was?' Faith speared an olive in her drink, slide it between her teeth.

'To absorb everything in the world. But also to escape.'"

6. "'No worries,' Zee had said to Greer, which was an expression she and Greer both hated, so it was spoken by her ironically. Young, thin, uninteresting-looking women standing behind the counter in boutiques singsonged this phrase in response to just about anything: 'Nuclear holocaust?' 'No worries!' The expression was absurd, because everyone knew that everyone had legitimate worries all the time."

7. "Being needed was something that Zee wanted, too. Being needed or loved; one of these or both. Preferably both! They weren't the same, but they occupied related territory. Love would happen to her too, or maybe it wouldn't. Maybe her life would never settle, would never gel, either professionally or in terms of love. Still: no worries!"

8. "That was it: why did she have to go through life feeling half-full? She wondered if some people got to feel fully full, or whether it was everyone's fate to feel as if the state of being human was one in which the self was like a bag of something wonderful that had already been half-eaten."

9. "And how strange, too, that laugher would characterize so much of what they did from that night on, even if some of it was the laughter of helplessness in the face of what was unfixable."

10. "But she thought that maybe there had been a series of moments, and that this was the way it was for most people: the small realizations leading you first toward an important understanding and then toward doing something about it. Along the way, too, there would be people you would meet who would affect you and turn you ever so slightly in a different direction. Suddenly you knew what you were working for, and you didn't feel as if you were wasting your time."

11. "'Why are we so hard on ourselves?' asked someone with great plaintiveness. Faith thought, it's not that I'm so hard on myself exactly, it's that I've learned to adopt the views of men as if they were my own."

12. "Was this what it meant to have a voice that wasn't always an inside voice? It came out of you as if through your own personal loudspeaker. She wondered where the reward was for speaking up, where the catharsis was. Right now she just felt sick."

13. "She'd always said she was political, but looking back on it, she felt it had been an avocation; now her work life was political in some deep and consistent way, she thought, because she entered the homes of struggling people, and saw their lives were like."

14. "A good friend would say yes, yes, I forgive you, and the two women could embrace in the way that women did. Women, who could be so easy with each other. Women, who were physical and loved each other, even when they were not lovers and never would be. There had always been an agreement, unsaid but binding, that the two friends would look out for each other."

15. "I think there are two kinds of feminists. The famous ones, and everyone else. Everyone else, all the people who just quietly go and do what they're supposed to do, and don't get a lot of credit for it, and don't have someone out there every day telling them they're doing an awesome job."