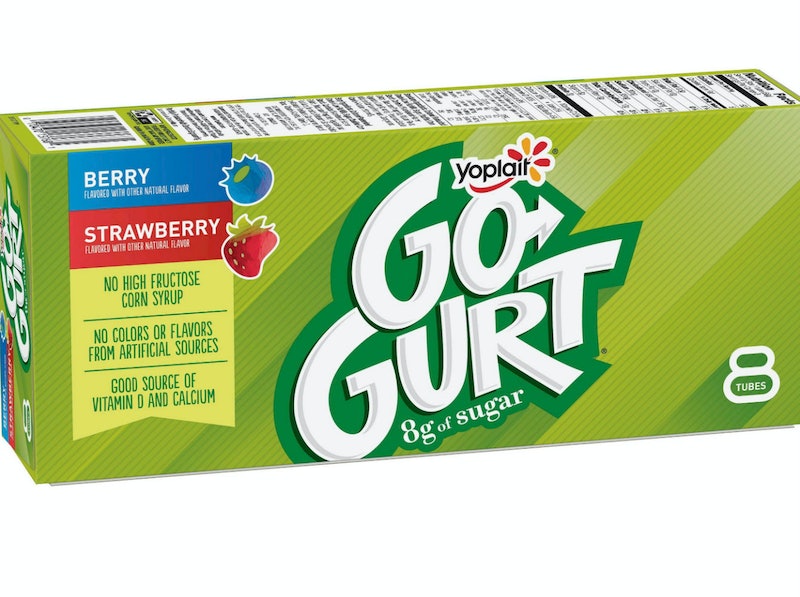 It's easy to look back at the '90s and think that everything back then was just better: the toys were inventive and fun (remember when everything didn't include a computer screen?), the books were iconic (The Babysitter's Club is just one series that comes to mind), and the beauty products were outrageously over-the-top (body glitter, anyone?). But the best thing of all has to be the snacks we ate as kids. Sure, there are lots of great snack options available right now, but foods from the '90s were just more fun. While some of them will likely never be available again (although I'm holding out hope for 3D Doritos), there are still some very '90s items you can still buy at the grocery store.

Some of our favorite foods from the '90s never got less popular and have always been there — like Corn Pops cereal and Goldfish crackers. Others were more popular in the '90s and never went anywhere, and we all just kind of managed to forget about them. And some were discontinued, but then brought back by popular demand because ~nostalgia~.

Sure, we could all continue to feel super bummed out that some of our favorite childhood foods are still gone... but we could also embrace what's still available to us today in the United States (other countries, like Canada, sometimes have a bigger and different selection). Why not? Here are a bunch of '90s foods you can still buy right at this very moment:

The only thing better than eating a Rice Krispie treat is eating Rice Krispie Treats cereal. This sugary "breakfast" that was more like dessert is still available for purchase at Walmart. Go crazy!

The packaging has been changed up a bit, but all kinds of Lunchables are still available at Walmart, Target, and most major grocery stores. Who didn't used to beg their mom for Lunchables every day?

Is there a snack out there that's better than Gushers? Not really. These are still widely available, including at Target, and they're still just as good as they were when you were a kid.

Bugles don't seem to be as popular as they once were, which is surprising considering how good they are. You can still buy them at Walmart to make Bugle fingers if you want.

There are so many great cereals from the '90s, but Waffle Crisp has always been a favorite. And, luckily, it's still available for purchase on Amazon!

Who didn't love Kid Cuisine? Sure, it might not be the most filling dinner option now, but it's a fun one. They're available at Walmart.

Candy in the '90s was probably the best ever, and Fun Dip was always so much, well, fun to eat. You can buy a whole bunch on Amazon if you really miss them.

Oreo O's cereal was brought back fairly recently, which might explain why it says "new" on the box. But for those of us who grew up in the '90s, they're an old favorite. You can purchase them at Walmart.

There was no shortage of delicious gummy options in the '90s, and Shark Bites were always some of the best. You can still pick 'em up from Amazon.

Bagel Bites never went anywhere, but it's always nice to be reminded that they're still available. You can buy them at Target and most major grocery stores.

Is it possible to think about Wonder Balls and not also sing the song? I don't think so. Sing it while eating one after buying it from Amazon.

Few snacks are as beloved as Dunkaroos. The good news? You can order them from Amazon. The bad news? They're imported from Canada, and some reviews say they're stale.

To be honest, I find Baby Bottle Pops to be slightly disturbing, but hey, if you want one, go for it. Old Time Candy still sells 'em.

Who needs actual Ritz crackers when you could have this fake cheese dip combo pack instead? Buy these from Target and most major grocery stores.

When you really think about it, sucking yogurt out of a packet is kind of revolutionary. And delicious. Buy these at Target!

More like this
Is The Insta-Famous Always Pan Actually Worth It?
By Jessica Goodman
On TikTok, Orange Wine Is The Varietal Of The Summer
By Madeleine Aggeler
Taco Bell Announced A Crunchwrap & Tostada Made With Cheez-Its
By Emma Garza
Starbucks Released New Menu Items For The Summer
By Emma Garza
Get Even More From Bustle — Sign Up For The Newsletter