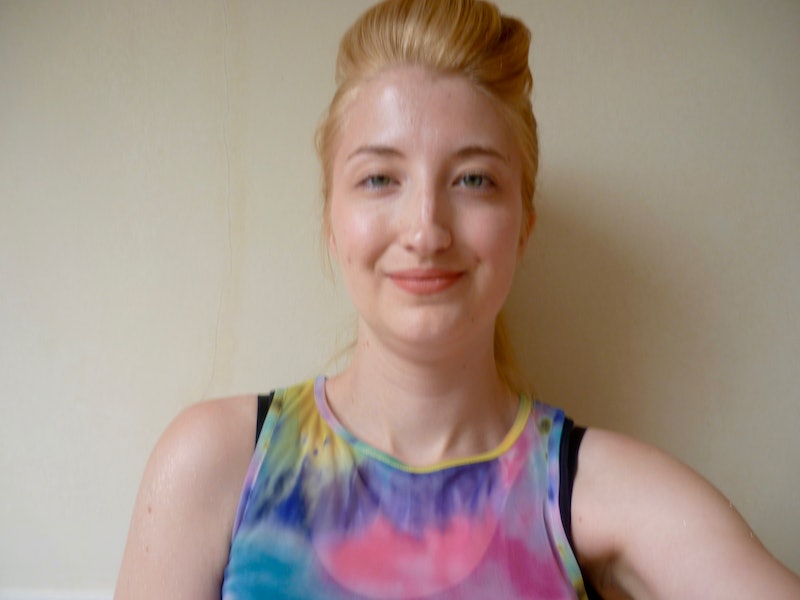 In the fashion and beauty worlds, one of the most popular trends Millennials love is what I like to call the "nostalgia" aesthetic. So what better way could there be to embrace this than by wearing body glitter for a week? Reminiscent of days spent crafting and attempting to dress like your favorite pop princesses who reigned during our youth, there's nothing more nostalgic than body glitter.

The '90s fashion and beauty trend has exploded over the past few years, but it appears that it's slowly on the way out. Sure, it's putting up a good fight and hanging on tenaciously with the help of butterfly clips and crop tops. But taking the lead in the cyclical style race is the early '00s trend. Yep, the new millennium aesthetic is creeping into vogue in 2016.

But during this transitional period, the one look that we can wear without seeming totally old-school is one that leapt over the millennium barrier and was popular in both the late '90s and early '00s: Body glitter, of course.

Body glitter was a way for many of us mere mortals to feel like Britney Spears. In reality, we were probably struggling with body-confidence issues, acne, and just starting our periods. So in order to forget about the problems of adult life while looking like I'd just stepped out of the '90s and early '00s, I wore body glitter for a week. This is what happened.

Before my sparkly week began, I stocked up on some supplies. First off, I opted for a Stargazer Gel Glitter in "Glitter White."

I wasn't sure how thick this solution would be, so I also picked up some Stargazer Glitter Fix Gel and thought I could use this in conjunction with some actual glitter if the need arose.

I rummaged through my craft cubby-hole and was delighted to find some silver glitter. I actually had multiple colors. But when doing my research, I concluded that in the late '90s and early '00s, metallic glitter appeared to be among the more popular shades. I was ready and raring to get glittered.

I started the week feeling super excited because I adore dressing up and looking a little quirky. So I thought, why not go all out? I sported a tie-dye, transparent mesh tank top over a black one — because unfortunately, society censors women's nips — and I adorned my shoulders with sparkles.

I first applied the gel glitter, but I felt that with my colorful top in competition with my soon-to-be glittering shoulders, I needed to ramp up the sparkle. So I smothered my shoulders in the glitter fix gel and patted the silver product onto my shoulders. I was very happy with the finished result and I enjoyed how it worked with my '90s-inspired apparel.

A couple of family friends were opening their new coffee shop on this day, so my shoulders and I went to go check it out. After catching up with one of the owners, he politely commented that I was looking rather sparkly. Next, I had a couple of minutes to speak with a girlfriend who almost instantly spotted my sparkling shoulders and gave me her approval.

I had to get back to work immediately after my visit and there were no further comments from the general public, or anybody else for that matter. It was a great start to the week and I felt rather fashionable and, dare I say, cool.

On the second day of my challenge, I decided to go for glittering lower arms. It was then that I realized I was choosing outfits based on their ability to provide bare spaces on which to wear my glitter.

The weather in my home country, England, was warm, but there was a slight chill in the air. So I chose a mid-sleeve top. It was my fiancé's birthday and we were going on a shopping spree so he could spend his gifted money. I followed the same routine as the day before and ended up applying the actual silver glitter, in addition to the opalescent gel glitter, from the elbow down.

Everything seemed to be going swimmingly until we reached the store. I soon realized I was close to leaving a trail of glitter in my wake. I began to think that sporting glitter-covered arms for an afternoon of shopping probably wasn't the best idea I'd ever had.

Unfortunately, I needed to be super careful not to get my glitter on any of the clothes — the idea of me trying anything on was definitely out of the question. I began to think that the rest of the week might not be quite as fun as I had imagined.

On Day 3, I had to look slightly more professional, as I was going to a meeting about fracking with (mostly) a bunch of people I'd never met before. So I decided to apply only gel glitter to my cheekbones for a subtler look. I didn't want to pull a Tinker Bell for such a serious occasion and leave a pixie dust trail wherever I went.

However, my plan backfired on me and nobody noticed my glittery cheeks at all. Considering it was the first time I'd met some of the people at the event, they might have been being overly polite. You know what us Brits are like when it comes to manners.

With more than half of the week gone, I decided I needed to get majorly glittery again, so I went back to my previous method of applying the gel glitter first, followed by the glitter fixer and the silver glitter. I applied these products to my décolletage and loved how feminine and demure they looked.

Sadly, I had a lot of work that day and I ended up being all dressed up with nowhere to go. The only other human to lay eyes on my glittering chest was my fiancé, who refused to hug me for fear that I would ruin his new clothes. As it turns out, all that glitters is not gold.

Suicide Squad had just been released, so I channelled Harley Quinn for my trip to the cinema. Thus, the only bare skin I had on show were the tops of my thighs. I thought this would actually add to my girly yet kooky Harley Quinn look, so I applied all of my products as before onto my thighs.

One thing I hadn't counted on was my glitter falling off. After a pre-movie trip to the bathroom and my shorts being pulled down over my thighs, I realized I'd lost a lot of sparkle. I also managed to fall over a stack of children's booster seats in the dark movie theater, where I reckon I left a sparkly smear. By the time the movie had finished, there were hardly any remnants of glitter left.

By this point in the week, there was glitter everywhere: In my car, on my bathroom floor, in the bottom of the shower. I felt like my whole life was transforming into one huge, sparkly bomb. A friend's words from earlier in the week were ringing in my ears: "Gossip is like glitter, you can never truly clean it up."

Learning from the mistake I had made the previous day, I decided to splash glitter all over my legs, instead of just my thighs.

For the final day of my glitter-ific week, I decided to go all out. I wanted to try the cheekbone look again, but with way more glitter. So I added the silver glitter on top of the gel one, as I had done for the majority of days.

I was traveling with my vintage girl band to perform at a venue a few hours away. Before I left the house, my fiancé noted, "That's a lot of glitter!" It did feel a little crusty at first, but I soon got used to it. In fact, I totally forgot I was wearing glitter after a while, so when I was met by surprised comments upon arrival at my singing partner's house, it took me a second to realize what she was talking about.

On our road trip, we stopped for gas at a busy station and people stared curiously at me, but it took a while before the penny dropped. You'd think after my previous experiences, I would have remembered I was wearing a ton of glitter on my face, but a couple of hours later when we reached our destination, I was met with exclamations about my sparkling cheeks that left me momentarily confused.

Unfortunately, I had to remove my sparkles before our gig, which required many baby wipes. However, when I'd finished, there was still the odd speck of glitter that didn't want to budge. I didn't mind, though, as my rogue sparkles went quite well with my silver sequined dress.

What Did I Learn From This Sparkling Week?

Honestly, life's too short to worry about what people think regarding the way you look. Chances are, they are too wrapped up in their own lives to care anyway.

Sure, glitter gets everywhere. But it can also make you feel like a happy unicorn queen, so it's definitely worth the mess.

I'll definitely be taking my glitter with me moving forward. Even if I leave a trail of sparkly mess behind me, I know my mood will be elevated and my outfits made all the more interesting. I'd recommend that anybody who loves a bit of sparkle wear body glitter wherever and whenever they want to.

More like this
‘90s Streetwear Brands That Are Making A Major Comeback
By Dominique Norman
10 Nail Trends That Perfectly Capture The Early 2000s
By Paris Giles
11 Trends From The ‘90s That Made You Feel So Cool
By Julie Sprankles
I Tried Marilyn Monroe's Makeup Tricks, & They're Pretty Genius
By Olivia Rose Ferreiro
Get Even More From Bustle — Sign Up For The Newsletter