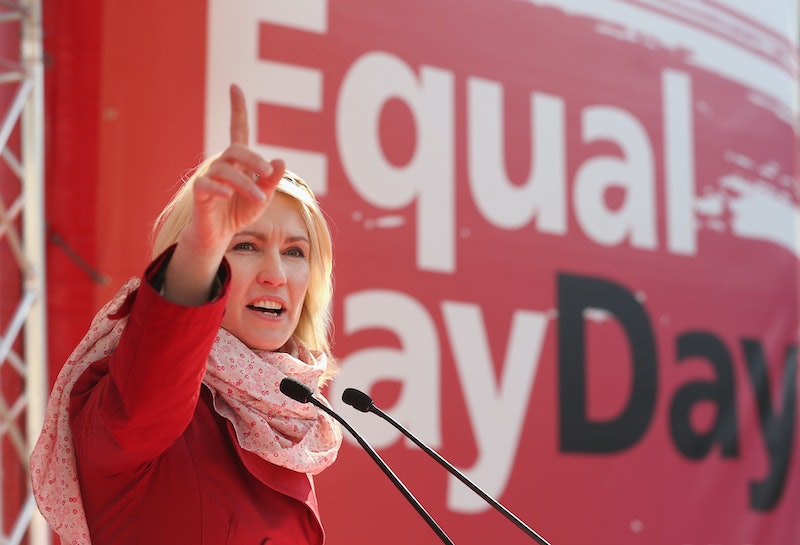 The Equal Pay Act was passed 53 years ago, and while there has been some progress in reducing the difference between men's and women's wages, the pay gap is far from being completely eliminated. With today being Equal Pay Day in the United States, it's the perfect day to brush up on facts regarding pay inequality and to help spread the word by sharing some awesome memes exposing the wage gap on social media. Because, believe it or not, there are droves of skeptics on arguing that the wage gap a myth, making it an issue that still needs to be exposed.

In the U.S. women in nearly every industry receive lower pay than their male colleagues, regardless of whether they have equal or more education, more work experience, or put in the same amount of hours into their jobs. To make things worse, Native American, black, and Hispanic women earn wages much lower than the 78 cents to a dollar often touted as the difference between the two sexes' wages — 65 cents, 64 cents, and 54 cents respectively are what these groups earn to the white man’s dollar. As women age, the gap between them and their male coworkers also tends to widen.

Here are some great memes and comments you can share today.

This one pretty much says it all.

2. This Shouldn't Be Controversial

It's baffling that there are still people out there who push back against this idea.

This simple image is so effective at getting such an important message across.

5. It Would Benefit Everyone

Society as a whole would prosper from an economy boosted by women's equality.

This video by the organization Lean In drives the point of how much 20 percent really counts home by showing what life would be like if women received 20 percent in every aspect of life, including cell phone battery lasting power, the amount of coffee we order, and the length of hair our stylists will agree to cut.

7. Major Improvement To Quality Of Life

Women have to work much longer to reach the average amount of income white, non-Hispanic men earn by the age of 60. Latinas have the worst deal of all, having to work, on average, until the age of 94 to reach the same earnings.

This is definitely not a thing of the past.

It may be nerve-wracking, but standing your ground and asking for what you deserve in the workplace is a must.

This video by theSkimm depicts the history of pay inequality in the U.S. perfectly.

13. And This President Isn't Helping

14. A Few Women Face This Reality

It's more powerful to hear the people who are affected by discrimination actually speak on it.

A reminder that the beloved Fearless Girl on Wall Street would face discrimination if she were real.

What else is there to say?