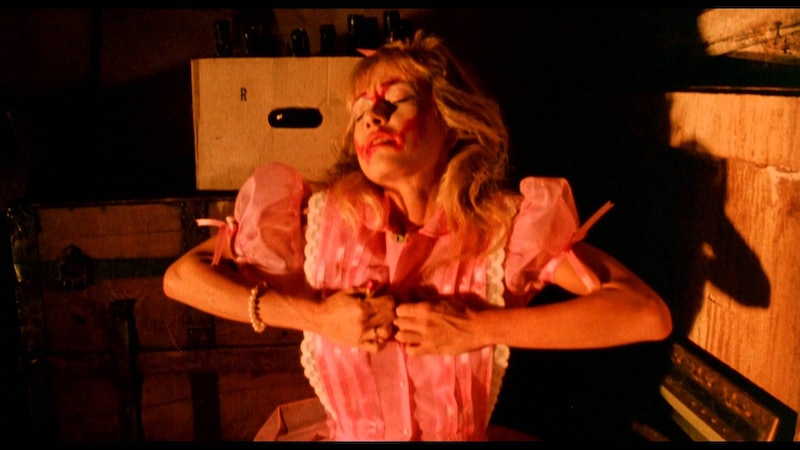 We're just a few days away from the scariest day of the year. And Halloween is the best time to overload on horror movies. While you can marathon the greatest hits from infamous killers like Jason, Michael Myers, or Freddy Krueger, they aren't the be all and end all of the genre. October is a great month to explore some equally freaky movies that you may not have ever heard of, but will still give you all the gore you are looking for. Lesser known movies like Trick 'r' Treat, Ginger Snaps, and Tales of Halloween pack some scares and may help you impress your friends. If you've already exhausted all the classics, these 16 underrated Halloween horror movies are a must-watch to get into the holiday spirit. Even better: they're all currently available to stream, so you won't be scouring eBay for vintage copies.

These movies run the gamut of horror conceits. And they cover 40 years of history, from the '70s right on to the present. So gather your bravest friends and prepare for a Halloween watching parties of obscure Halloween freak fests. Who knows? One of them may become your new favorite. Just don't forget to leave your lights on.

In Hell House LLC, a journalist tries to piece together what happened inside a haunted house that left several people dead. The city won’t tell the truth about the situation, but found footage gets to the bottom of the story.

Trick 'r Treat is a spooky film that revolves around a kid who dresses up in a burlap sack to terrorize the neighborhood on Halloween.

Idle Hands follows a group of teenagers as they discover that a demonic force has taken over their friend Anton (Devon Sawa) — specifically his hand. It leads him to kill his two best friends Pnub (Elden Henson) and Mick (Seth Green), who return to life as zombies. In addition to murdering those closest to him, Anton's evil hand significantly hinders his chances with his lovely neighbor Molly (Jessica Alba).

This film centers around a family of serial killers who torture a group of friends on Halloween night. House of 1000 Corpses is ultimately a twisted family story, but it's still straight up creepy.

Five friends go on a road trip to discover which city has the scariest underground haunted houses. At first, their trip doesn't seem to be unfruitful, but that changes soon enough.

This film isn't exactly spooky, but is on this list for those who want a friendly scare. In the film, three young preteens (Mitchel Musso, Spencer Locke, Sam Lerner) believe that a neighboring residence is a living creature that will hurt the neighborhood. Although no grown-ups believe them, they experience a bumpy ride to find a way to destroy the structure before innocent trick-or-treaters meet deadly ends.

Two teenage girls (Mimi Kinkade, Linnea Quigley) hold a Halloween seance in an old funeral parlor to scare their friends, but things get really creepy when the spirits actually show up and begin to reek havoc.

Two sisters fake their own deaths all year 'round to scare people. However, when a werewolf bites one of the sisters, her transformation coincides with Halloween. People think she’s just putting on an act, but she’s finally turned into something deadly.

Eric Draven (Brandon Lee) and his fiancée (Rochelle Davis) are brutally murdered before their wedding by a city gang. On the anniversary of their death, Eric rises from his grave and takes on the position of the supernatural Crow. His sole mission is to pay back every one of the gang members who killed him and his fiancee.

The Fly stars Jeff Goldblum as Seth Brundle, a scientist who has almost perfected teleportation and starts showing off about his scientific advances to journalist Veronica Quaife (Geena Davis). But when a fly gets into one of the telepods during a demonstration, something monstrous emerges...

Tales of Halloween consists of 10 short stories that revolve around ghosts, ghouls, monsters, the devil, aliens, and axe murderers who terrorize a certain suburb on Halloween night.

It's not exactly obscure, but it may not be on your Halloween list because it's more hilarious than scary. But if you love parodies, then this comedy-horror film is for you. Now that you're older and wiser, you'll probably get most of the genre references peppered in throughout the movie.

Two hotel workers end up spending an entire weekend in a historic inn to shut it down permanently. When that task seems pretty simple, some mysterious guests show up, and they have other plans.

Feast is basically a blood bath, so I hope you have a strong stomach. But to break up the horror, the movie throws in some witty humor and gross gags.

Stream it on Vudu.

The film takes place at a traditional sleepaway camp, where teenagers and children go missing. No one is safe!

A series of unexplained murders occur in a quiet town, and the residents decide to take matters into their own hands to hunt down the killer. After many of these vigilantes end up dead, a young boy named Marty (Corey Haim) takes up the task of finding out what's really going on.

When you think you've seen it all, lesser known horror movies are where it's at.

More like this
Sadly, 'Fantastic Beasts: The Secrets Of Dumbledore' Isn’t Streaming — Yet
By Arya Roshanian
The 'Thor: Love and Thunder' Trailer Finally Shows Christian Bale As Villain Gorr
By Grace Wehniainen
Laura Dern Said “Cultural Awareness” Made Her Rethink This 'Jurassic Park' Fact
By Grace Wehniainen
The 'Hocus Pocus' Sequel Finally Has A Release Date & It Makes Total Sense
By Shannon Barbour and Radhika Menon
Get Even More From Bustle — Sign Up For The Newsletter