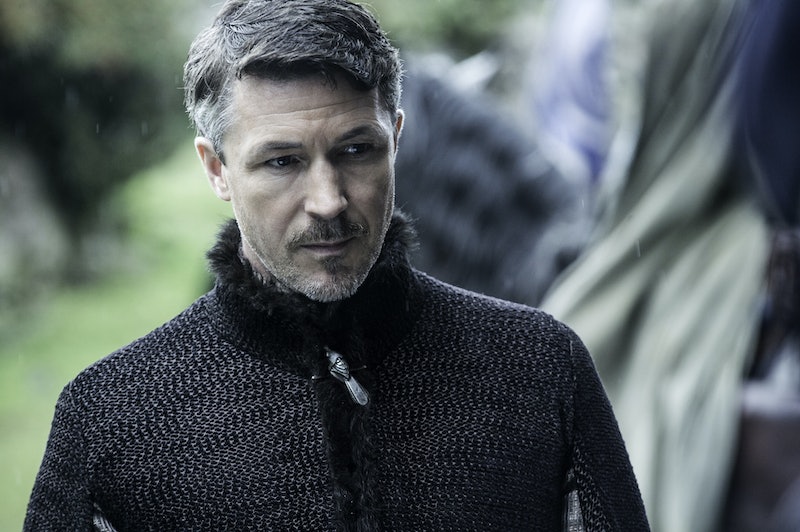 Yes, it may take place in a fictional fantasy kingdom and feature dragons and witches and ice zombies… but Game Of Thrones is the most politically relevant show on television. And there are plenty to Game Of Thrones quotes that capture what's going on in our country right now. Think about it: the acclaimed TV series features political maneuvering; the rise of a new religious order in the government; the capable women forced to be subservient to less qualified men; the wars waged at the expense of the poor and needy; heck, even the presence of a great big wall that protects a nation from invasions of unwanted foreigners. Author George R.R. Martin may have reportedly based his A Song Of Ice And Fire series on the War Of The Roses, but it could just as easily have been based on 21st century politics.

You know it's a strange time in our nation's history when even the most fantastical television show is starting to feel eerily prescient. When GoT premiered in 2011, audiences likely flocked to it as escapist fare, enjoying the departure from real life with the help of baby dragons and sword fights and general spectacle on a scale never before seen on the small screen. But now, the cruel leaders and the back-room maneuvering and societal unrest are starting to feel uncomfortably topical.

Here are some Game Of Thrones quotes from times the show got too real about our current political climate.

It sure is; and right now it sort of feels like nighttime all the time, doesn't it? There are undoubtedly terrors ahead, but surely a new day will dawn soon enough.

Some people are able to take advantage of the current chaos in our country and climb the ladder to the top. Others just keep getting kicked off and can't even get a firm grasp on a rung.

3. "The good lords are dead, and the rest are monsters."

4. "Any fool with a bit of luck can find himself born into power. But earning it for yourself, that takes work."

Born into power, or born into $100 million. Same thing, really.

5. "I'm simply asking you to run my kingdom while I eat, drink, and whore myself into an early grave."

And this is the only time I'll ever try comparing Mike Pence to Ned Stark.

6. "We've had vicious kings and we've had idiot kings, but I don't know if we've ever been cursed with a vicious idiot for a king!"

7. "A lion does not concern himself with the opinion of sheep."

Welp, that about sums up the current government's prevailing philosophy, doesn't it?

8. "Do you know what the realm is? It's the thousand blades of Aegon's enemies. A story we agree to tell each other over and over until we forget that it's a lie."

This sentiment rings true in a time when the history textbooks we give our students are literally rewriting history.

9. "When you play the game of thrones, you win or you die. There is no middle ground."

When the government's current agenda could result in people actually dying (allegedly, repealing Obamacare would directly lead to approximately 43,000 deaths annually), then politics literally becomes a matter of life and death.

10. "Always keep your foes confused. If they don't know who you are or what you want, they cannot know what you plan to do next."

Bouncing from controversy to controversy so quickly it's giving us all whiplash, it's impossible to predict what the current government is going to get up to next — which is, quite possibly, entirely the point.

11. "If you think this has a happy ending, you haven't been paying attention."

On my more pessimistic days, it seems like Ramsay was right.

12. "Perhaps we've grown so used to horror, we assume there's no other way."

Then again, Varys is here to remind us that just because something is horrible doesn't mean it will always be horrible. A slightly more optimistic view of things.

13. "The Mad King did as he liked. Has your uncle Jaime ever told you what happened to him?"

The history of Westeros proves that the people of that fictional kingdom won't tolerate a tyrant for long.

You'd think this sentiment would be common sense. (Then again, the guy who said it on the show broke his marriage vow, leading to catastrophe.)

16. "We march to victory, or we march to defeat. But we go forward. Only forward."

Despite the incredible resistance we may face, it's important to keep (literally) marching for what's right.

Burn it down, Khaleesi. Sometimes, to fix things that are irreparably broken… you just have to start all over.

Game Of Thrones will probably feel even more relevant than ever when Season 7 premieres on Sunday, July 16.