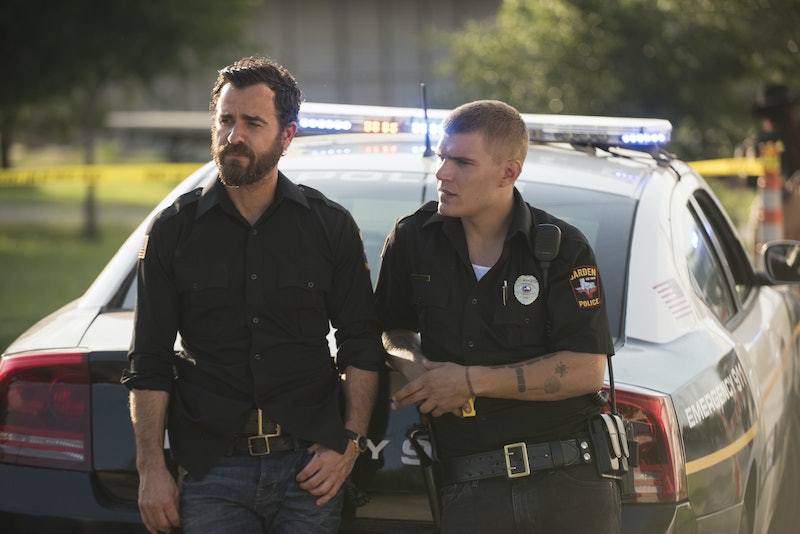 Unlike the season before it, The Leftovers Season 3 premiere didn't begin by catapulting viewers back into prehistoric times, then uprooting the show to a brand new location with a brand new cast of characters, and not giving the audience even a glimpse of a familiar face into over halfway through the hour. By that metric, you might assume that Sunday's episode — titled "The Book Of Kevin" — wouldn't have been nearly as disorienting as Season 2's opener, "Axis Mundi." But you'd be wrong — there are still so many questions from The Leftovers Season 3 premiere we want answered.

Season 3 didn't begin thousands of years in the past; but it did begin with another disconnected prologue with few readily apparent connections to the show's main narrative. And despite the fact that the bulk of the episode took place in the same town as the Season 2 finale, with the same cast of characters (minus a few faces), it still managed to be one of the most puzzling and confounding hours of the show yet. Mostly, that's thanks to a three-year time jump that left much changed and little explained.

Future episodes will surely shed light on most of the mysteries that the premiere presented. And here's a list of the 17 most burning questions raised by "The Book Of Kevin" so you can keep track of when and how they're answered.

1. How Does The Opening Sequence Connect?

Episode director Mimi Leder recently explained to Bustle how the Leftovers Season 3 premiere opening sequence is related to the Guilty Remnant, thanks to the religious Millerite cult of the 1800s. But could there be a more literal connection as well? Season 2's cavewoman sequence was revealed to take place in what would become modern-day Jarden… so does Season 3's sequence take place in a significant location as well? Damon Lindelof revealed in an interview with Vulture that the Millerites had a large branch in Australia; could the village seen here be in the same location as the Aussie-set cliffhanger of the episode?

After the prologue, viewers watched as Evie Murphy, Meg Abbott, and the rest of their Guilty Remnant cohorts camped out in the Miracle National Park visitors center were supposedly blown off the map by a missile launched by ATFEC (the semi-fictional Bureau of Alcohol, Tobacco, Firearms, Explosives, and Cults). But could either of them have survived? Evie's father John is right that his daughter has faked her death/disappearance before; but he also mentions that dental records "confirmed" her death. Last year, TVLine reported that actress Jasmin Savoy-Brown (Evie) had been promoted to a series regular for Season 3; so what happened? Did plans for the season change after that report? Or should we prep ourselves for a surprise Evie resurrection?

Given that Tommy has spent most of his life post-Sudden Departure in and out of various cults, law enforcement seems like an odd choice of career for him. I'm also curious why anyone let him be a cop: a former disciple of Holy Wayne — ATFEC's Most Wanted cult leader back in Season 1 — who murdered a government agent when they raided the cult's compound and then became a fugitive on the run with one of Wayne's pregnant, underaged child brides. Are background checks that lax in Jarden? Or is Kevin's semi-messianic status just that coercive?

It quickly became clear that Matt Jamison — and his congregation and many other people in the world as well — believe that something important is going to happen on the impending seven-year anniversary of the Sudden Departure (based on the fact that the number seven recurs a lot in the Bible). But what will it be? A second Departure? The return of the Departed? A world-ending apocalypse? Or just another Great Disappointment like the one the Millerites suffered through back in the 19th century?

5. How Did Nora Break Her Arm?

While the fate of Nora Durst's ulna may seem insignificant in the grand scheme of things, her cast isn't a trivial detail that Lindelof threw into the show for no good reason. It must play an important role in something that happened to Nora in the recent past — and I for one can't wait to find out about it.

Dean the Dog Hunter's story about canines turning into people and infiltrating the government was just the ranting of an insane man, right? Then again, we might think the same of Kevin's story about going to the Purgatory Hotel if we hadn't seen it for ourselves. And that dog did run away with the telltale peanut butter and jelly sandwich after Tommy gunned Dean down later in the episode…

We already knew that the relationship between John and Erika Murphy was on the rocks; but it was still a shock to see John suddenly married to Kevin's ex Laurie in the new season. Did they fall in love first and start their psychic charade after? Or did they go into business together first and then find themselves drawn towards one another?

It's no surprise that the already-strained marriage between John and Erika fell completely apart after Evie's (presumed) death. But what is a surprise is Erika's complete absence from the premiere. Does she still live in Jarden, or did she move away? And why does nobody even seem to mention her anymore?

9. What Happened To Lily?

Speaking of absent friends, it took a while for it to become clear that baby Lily wasn't just tottering around off-screen — she has mysteriously vanished since the end of Season 2, as revealed by Jill in a conversation with her dad. Did Lily die? Was she abducted? Did Nora and Kevin give her up — perhaps to her biological mother? Or to Erika Murphy, grieving for the loss of her own daughter? Does Lily's absence have anything to do with Nora's broken arm?

Jill is now in college, and only stopped by Jarden for a short visit for her brother's birthday. When she left, she joked with her dad that they would never see each other again, since the world is ending in two weeks. But is that really the last we'll ever see of her? Was that the show's way of writing an extraneous character out of the final season? Or does Jill still have a role to play in the conclusion of the series?

After Kevin wrapped that plastic bag around his head and took a few dizzying breaths, the scene cut away to the chief of police walking out his front door. What happened in the interim? Did Kevin rip the bag off? Is he just flirting with death the way Nora asked sex workers to shoot her back in Season 1? Or did Kevin actually die in that moment, and return to the afterlife before coming back to our dimension? If so, how many times has he done this? Does he have to sing karaoke every time he comes back to life?

12. Did Kevin Cleanse The Water?

It's clear that Kevin jumped into the supposedly poisoned water because he knew the toxic waste couldn't kill him even if it was real. But were the protestors actually pulling a prank? Or did Kevin's presence in the water somehow cleanse it? If we really believe a higher power caused an earthquake to drain a lake and prevent Kevin from drowning in Season 2, then is it such a stretch that the same higher power rendered the toxins inert so as to spare Kevin's life again?

13. Will Mary Fall Back Into Her Coma?

Mary Jamison is leaving Jarden — and taking young Noah with her — because Matt has essentially been holding her captive, sure that if his wife leaves the confines of Miracle National Park, she'll lapse back into her coma. The question is: could he be right? Will Mary be able to return to Mapleton in her current, lucid state? Or will she collapse into unconsciousness the moment she sets foot outside of town?

14. Can Kevin Die Outside Of Miracle?

Matt, John, and Michael all believe that Kevin is sacred based on the fact that he's apparently been resurrected multiple times. But when Kevin insists that he can still die, Matt agrees; he just can't die in Miracle. Is Matt right? Or is he just speculating? How will they ever test that theory? If Kevin tries to die outside of Miracle and it works, well… RIP.

He's been drowned, poisoned, shot, and asphyxiated — and he's survived it all. Is Kevin Garvey really the Second Coming of Christ or some other holy prophet that's meant to save the world from the impending apocalypse… or perhaps one who's meant to help usher it in? Or is he just a normal guy with a rash of good luck and a hyperactive subconscious?

16. What's Up With The Flashforward?

The episode-ending flashforward sequence is so rich in detail — and mystery — that it spawns its own long list of questions: Where is Nora, exactly? How far in the future is this? What's up with the doves? What happened to Kevin and the rest of her family? Why is she going by the name "Sarah"? Why is she pretending not to know Kevin? What the heck happened between now and then?

17. How Does Everyone Get To Australia?

Most of the promotion surrounding the third season involved the show's shift to Australia; and given how Season 2 started right off the bat by moving to Texas, you'd be forgiven for assuming that the relocation would happen as swiftly in Season 3 as well. But minus a brief mention by Kevin that his dad is living Down Under, there was nary a reference to the continent — or how the characters will end up there. Will they be going to visit Kevin, Sr.? For Nora's work with the Department of Sudden Departures? For some other undisclosed reason? Who will be making the trip, and who will be staying behind?

We'll just have to keep watching to find out.