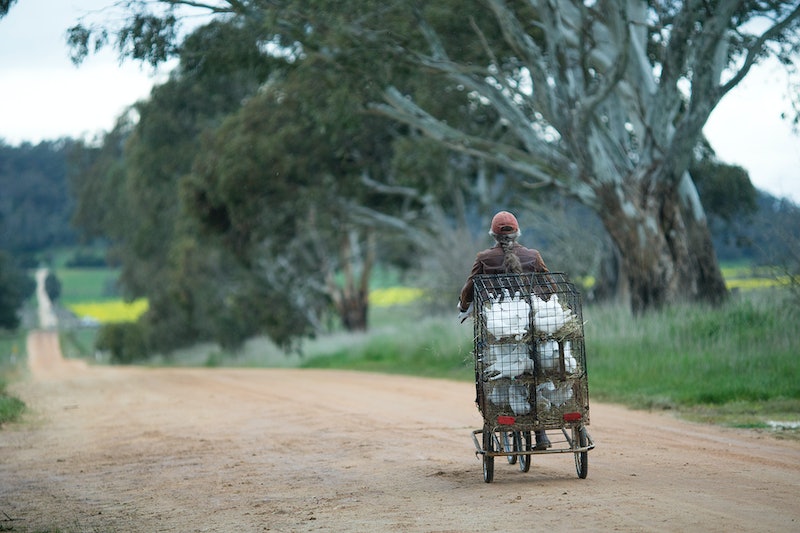 What the heck just happened? Personally, I lost track of how many times I asked myself that question during the Season 3 premiere of The Leftovers; but if there's one moment that left the entire audience gasping, it was undoubtedly the very last scene of the episode, which ended the hour on a quixotic cliffhanger. "I'd heard rumors about what it was going to be," The Leftovers star Carrie Coon tells Bustle in an interview about the final scene, also describing the sequence as "terrifying."

First, a brief recap: After Kevin spies two planes skywriting the phrase "13 Days To Go" (counting down the hours until the cataclysmic event some are sure is going to strike on the seven-year anniversary of the Sudden Departure), the scene shifts to an unknown location, where sheep graze in fertile green fields and an unknown person with graying hair collects a coop full of doves and bikes them over to a nearby church. A nun there comments that the number of doves means that "love is in the air"… and then asks the delivery woman, whom she calls Sarah, if the name "Kevin" means anything to her. The person turns around, and — surprise! — it's a much older version of Nora. "No," she answers the nun.

I'm sorry, what? If you assumed that the episode had simply jumped over to Australia (where part of Season 3 is confirmed to take place), then you're not alone. The thought that I was watching an actual flashforward never crossed my mind until Nora turned around. I guess the fact that she's still alive, and much older, at least means that a literal world-ending apocalypse didn't happen on Oct. 14. But clearly something's wrong in a future where Nora Durst is living in the middle of nowhere under an assumed name and pretending not to know Kevin Garvey.

"I definitely felt the weight of the end of the series on my shoulders, but I also trusted Damon and Tom and Mimi to get it right," Coon says, regarding Leftovers co-creators Damon Lindelof (Lost) and Tom Perrotta (Election), as well as episode director Mimi Leder. "It was such an honor to be trusted. I feel like Nora's a big part of Season 3, and I wouldn't have wanted it any other way."

The actor credits Lindelof for his wild imagination and astute insights into his own characters. "Damon and I have a very symbiotic relationship; we're always on the same page with Nora. There are very few times in the three years where I've questioned Damon's choices in regards to story, very few. I didn't really have to talk about the scene" with him, Coon says. "I'm just really grateful."

For her own part, Leder — who is also an executive producer on the HBO series — was just as surprised by the end of the premiere as the rest of us. "My reaction was the same as yours," she tells Bustle. "'What? Whaaaat??'" (That's saying something, coming from the director who has helmed some of The Leftovers' most controversial sequences, including the Season 1 stoning of Gladys and the Season 2 prologue about the prehistoric cavewoman.) "I was blown away when I read it and very excited to shoot it." Leder reveals that she and Coon didn't shoot that particular scene under the very end of production, and refers to it as a "disorienting" experience.

"It's interesting doing flashforwards," she says. "I think it's provocative." At this point, it's unclear whether this future-shock sequence will recur in pieces throughout the season… or whether it won't be revisited until the very end of the series. But Leder wants to reassure us that — unlike the mystery of the Sudden Departure itself — answers are forthcoming. "What does it mean? You'll just have to find out," she teases. "It does all come together. It really does."

More like this
'Elite' Season 6 Is Arriving Sooner Than You Think
By Gretchen Smail and Grace Wehniainen
'The White Lotus' Season 2 Finally Has A Release Date
By Bustle Editors
'Abbott Elementary' Returns For Season 2 Just Days After The Emmys
By Alyssa Lapid and Grace Wehniainen
The ‘Emily In Paris’ Season 3 Release Date Is Here, Plus The First Footage
By Bustle Staff
Get Even More From Bustle — Sign Up For The Newsletter