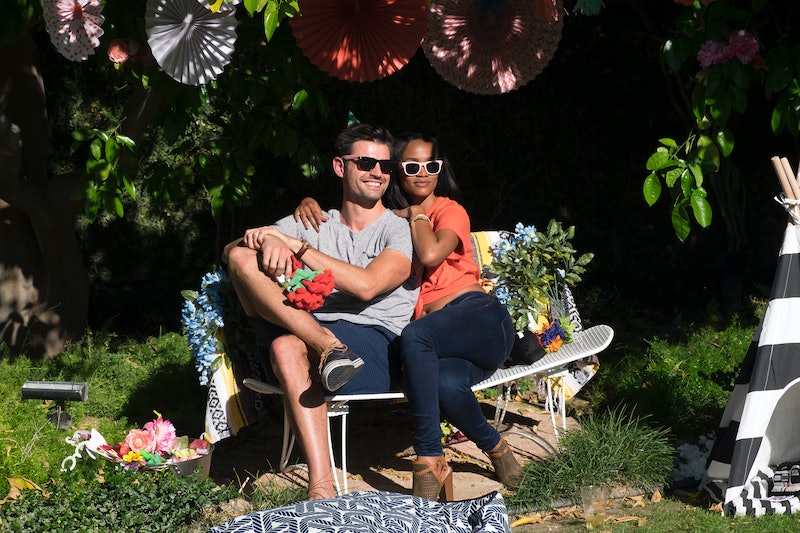 It's only been a week since Rachel Lindsay's season of The Bachelorette began, but it's already pretty obvious that Wisconsin native Peter Kraus is a Bachelorette frontrunner. I mean, there was literally a shooting star that passed over while they were talking. It must be fate. But what does anyone really know about the personal trainer other than he basically has the same name as Parenthood actor Peter Krause? As a freelance Bustle Bachelorette sleuth (my professional title), I analyzed his Instagram and figured out everything we need to know about the contestant, so you don't have to. Thank you, social media! What would the world do without it?

In case you've already forgotten who Peter is, he was the first one out of the limo at the mansion. He was adorable, and completely not embarrassing at all. He even made a cute little comment about how he and Rachel both have gaps in their teeth. Aww. However what really won America over was when Peter gave her chocolate, saying he didn't know what to get her, but everyone loves chocolate, to which she responded that she actually doesn't. His response? "I will literally throw this in the fire right now." And even though the Whaboom guy was narrating their conversation from inside on his megaphone, Peter still got the first rose at the ceremony that night.

To this adorable 1-year-old. And to this little lady.

He's Got A Solid Group Of Man Friends

Everyone needs a Taylor Swift kind of squad. "Three months ago I met my friends out for a night in Madison where I let them know that I'd be leaving in a few short days to begin what was sure to be the experience of a lifetime on #thebachelorette," he captioned the photo with his pals, "Their words of advice, 'Just remember you're not funny.'"

Workout Videos And Posts Are His Thing

I mean, it's not surprising that a personal trainer likes to post fitness videos, but it's still worth noting and posting because look how good he is at it!

I think it's a sin to be from Wisconsin and not a Packers fan, right?

He's Really Close With His Family

This photo says it all.

He posted a throwback from a triathlon he did last year. He came in fourth. I hope Rachel Lindsay is ready to get her exercise on.

There's no hints at who he voted for, but at least he got out and exercised his rights as an American.

He Has A Best Girl Friend

I personally think it's important for guys to have close friends who are girls. It says a lot about guys who can't be just friends with women.

He Cruises Around The Caribbean

"My hands looked like raisins for four straight days," he captioned one of the photos from his boys trip to the Caribbean.

You never know when that will come in handy. Everyone remembers that episode of Sex and The City when Miranda choked on Chinese food alone. If Rachel ends up with Peter, she will not have that problem.

He posts a lot of photos of his home. I have a strong feeling, this is where Peter is going to grow old. Rachel may have to make a move to be with him.

Oh man, if he was modeling on coupons like this before the show, I can't wait to see what happens after.

He May Have A Boat

Marry him, Rachel. Even if it's not his, days spent on a lake are the best days.

He Could Rock A Fanny Pack Back In The Day

"I think that my outfit and my facial expression say more than any clever caption ever could #tbt #ijustcant," he captioned the amazing photo.

And the food looks edible to me.

Hey, that jacket looks familiar. He wore it on Monday night's episode, but also in 2014. He knows how to look good, but he is also not so concerned with staying up-to-the-minute on trends.

I'm 100 percent rooting for Peter, how about you?

More like this
Bachelor Nation's Blake Horstmann Is Dating 'Love Is Blind' Star Giannina Gibelli
By Jake Viswanath and Radhika Menon
Tamra Judge & Vicki Gunvalson Gave A Hopeful “Tres Amigas” Update
By Brad Witter
The 'Love Island' Contestants *Do* Know Who Gemma's Dad Is, After All
By Bustle UK
Howard Stern's Net Worth: Is He The Richest Man In Radio?
By Hugh McIntyre
Get Even More From Bustle — Sign Up For The Newsletter