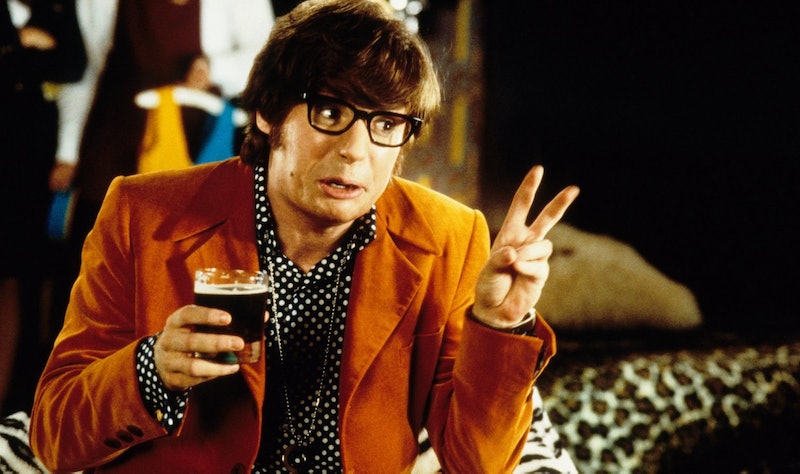 If there's one thing I was so not prepared for, it would be that I would one day write about the 20th anniversary of Austin Powers: International Man of Mystery. The first time I experienced the comedic prowess of SNL alum Mike Myers was as Austin Powers in the first of what would be three Austin Powers films. I can't tell you how many times my friends and I told each other, "Yeah, baby!" whenever we wanted to agree on something or how many times I'd reenact the Dr. Evil-"Shh" joke with my sisters. Back in 1997, Austin Powers delivered on the jokes. After 20 years, most Austin Powers jokes are dated to the point that they're not quite as funny anymore.

Don't get me wrong, there's still plenty of jokes in Austin Powers that can elicit a chuckle from those watching in 2017. It may be 20 years old, but this film is still delightful. That said, because Austin Powers was a send-up of spy films from the 1960s, it was far goofier than necessary. Most of its jokes were coming from period-specific references, riffing on knowledge that had already been in the pop culture consciousness for a long time.

Which parodies and jokes have lost a bit of their shine, you ask? Read on.

Austin Powers is a film primarily parodying the great James Bonds films of the 1960s and 1970s. The outrageous evil villain (complete with henchman), the dastardly evil plans, the debonair international spy, the sexy female sidekick and love interest, the exotic locations, the cool gadgets. It's all there, it's all Austin Powers, and it's all just a little bit off-kilter all these years later. Austin Powers will always be a parody of the James Bond films, but that doesn't necessarily me it still works.

2. A Hard Day's Night Parody In The Opening Titles

The Beatles did it in A Hard Day's Night and Austin Powers parodied it during the opening titles sequence: the crazy fans chasing the celeb in question around town. Austin Powers is seen at various points running down the street, hiding in a phone booth wearing a fake beard, and even hiding behind a magazine, all because his female fans can't get enough of him. It was kitschy in 1997 but now? It feels a bit too outdated.

Interestingly, the Austin Powers opening sequence features a dance sequence that's a direct parody of the Bob Fosse-choreographed Sweet Charity and, specifically, the dance sequence from "The Rich Man's Frug." This is such an outdated reference at this point in time, it risks being overlooked by viewers who have never heard the words "Sweet Charity" or "Bob Fosse" before.

The first majorly dated joke in Austin Powers involves seeing him in the celebrity wing of cryogenically-frozen people at the Ministry of Defense. Not only is the joke that Austin Powers is a celebrity (aren't spies supposed to operate in secret?), but that other celebrities like Gary Coleman and Vanilla Ice were frozen too. I don't know about you, but in my estimation, the star power of Vanilla Ice and Coleman has faded considerably since Austin Powers was released, making this joke fall flat.

Austin Powers really lets it all hang out in International Man of Mystery. Whether it's that uber-long urination gag when he's being unfrozen or accidentally breaking wind in a hot tub, there's just a lot to deal with. Toilet humor is not quite as big a trend in comedy these days and these jokes feel super dated.

6. Austin Powers Jokes About Free Love In the '90s

During his unfreezing process, Vanessa tells Austin Powers that it's her job to bring Austin into the 1990s. Still getting used to his surroundings, Austin Powers jokes that as long as people are still having "promiscuous sex with many anonymous partners without protection while at the same time experimenting with mind-expanding drugs in a consequence-free environment," he'd be cool living in the '90s. Oh brother.

Two niche parodies that the 2017 viewer may not pick up on unless they're super into British '60s television is Austin Powers parodies of The Avengers (not the Marvel version) and Adam Adamant Lives!. Itself a quirky spy show, The Avengers' lead female character, Emma Peel, was known for wearing a skin-tight black leather catsuit while she was fight. That catsuit is reimagined for both Vanessa and Mrs. Kensington during their fight sequences. Meanwhile, Adam Adamant Lives! is TV show about a turn of the century spy frozen and then reanimated in the 1960s. Sound familiar?

Hey, it's Will Ferrell! Oh, wait. Oh no, this is bad: It's Will Ferrell wearing a fez and what looks like gently-applied tan face make-up, sporting a vaguely Middle Eastern accent. But wait, it gets worse: Dr. Evil pushes a button that drops Mustafa into a secret chamber where he is burned alive. This turns into a long joke about Mustafa not being burned alive right away. Not the best joke in the Austin Powers canon after all these years, to be honest.

Dr. Evil's look and vibe is a straight parody of Blofeld, the James Bond villain that also had a penchant for gray suits and carrying around a cat. To 2017 viewers, the name "Blofeld" may sound familiar from the recent James Bond film, Spectre, but aside from that, Dr. Evil's reference points are already way, way outdated.

It may elicit a chuckle in 2017, but Austin Powers and Vanessa running over a security guard by steamroller is both a parody from the film The Naked Gun: From The Files of Police Squad! and a bit yawn-worthy.

It's a quick moment, but Austin Powers as a popular photographer with avant-garde visions is a parody of Michelangelo Antonioni's Blow-Up, a trippy and thrilling British film from 1969 that features those same wild and colorful visuals.

Dr. Evil's evil plans for world domination are outdated as a joke in Austin Powers but now they're actually outdated. Breaking up the royal family by painting Prince Charles as a cheater? Creating a hole on the ozone layer. Psh, whatever, Dr. Evil. That's so 1997.

I mean, who's even doing the Macarena anymore. C'mon guys.

Basil Exposition, Alotta Fagina, Number Two, and yes, those terrible secret names Austin and Vanessa use in Vegas (Oprah and Richie Cunningham) are all so blatantly gross or weird that it makes Austin Powers a dated comedy.

It's still pretty funny to see Austin Powers get caught up on 30 years of world history, but all of that history feels even further away from 2017 and thus, more dated than ever before.

16. All The Physical Comedy

In 2017, placing random but suggestive objects to stand in for various genitalia is just well-timed acrobatics instead of the potentially laugh-inducing physical comedy that it was played as back in 1997. This feels like some of the most outdated of the jokes in Austin Powers, to be honest.

I know that Austin Powers is a sexually-liberated man and he's very much of his own time, but all of his intense sexual energy is a lot to handle. It's also pretty weird and unsettling, like when he tries to bed Vanessa after asking her about how she got involved with the Ministry of Defense. It's played for laughs but those laughs may be missed in 2017.

The Swedish penis pump, Austin Powers' middle name (it's Danger), Austin Powers' love of Burt Bacharach, and yes, the million and a half jokes about his teeth: the running gags in this film get pretty tired for the casual 2017 viewer.