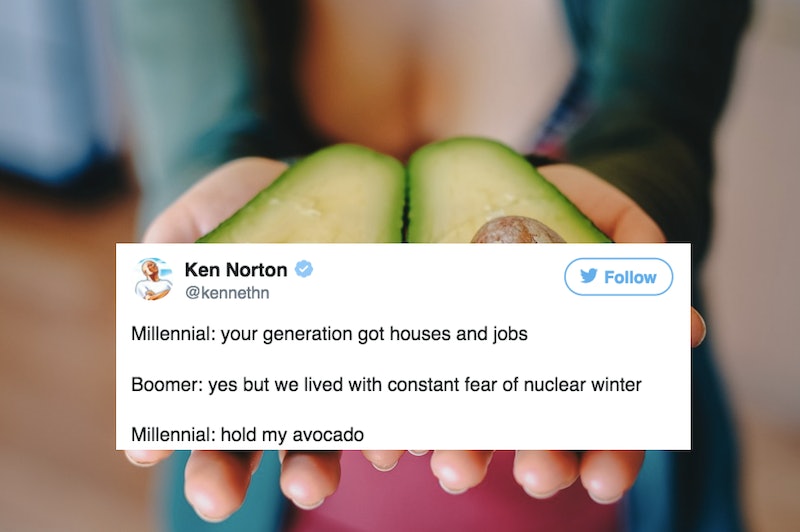 On August 8th, Ken Norton, a partner at Google Ventures, tweeted a joke about nuclear winter (ha ha, it's funny because in this current political climate, nuclear winter is a distinct possibility) with the punchline, "Hold my avocado," a millennial twist on the popular "Hold my beer" joke. The phrase quickly went viral, and the next day, TIME hailed it as "the viral catchphrase millennials have been looking for." But millennials, it turns out, are not in the market for a "viral catchphrase." The tweet and subsequent article have drawn enormous amounts of salt from those who have had it with the reductive millennial jokes.

Many of us are still nursing an avocado-related rage-hangover from earlier this summer, when Australian millionaire Tim Gurner suggested that millennials can't afford down payments on homes because we spend so much money on avocado toasts, despite the pesky "facts" that show we have the greatest increase in our savings rate compared to every other generation.

Part of what is so tiresome about the various "millennials looove avocados!" jokes isn't just that they're unoriginal (they are) and lazy (they are), it's that they continue to portray millennials as an entitled and self-centered generation more concerned with building its personal brand than engaging with the world around us. And sure, some of us are. But we are also the largest, most educated, and most diverse generation in American history, and we've been saddled with a mountain of social, political, and environmental miscalculations from our parents and grandparents.

So, no. Millennials aren't looking for a new viral catchphrase, but thanks anyway. Here is Norton's original tweet:

And here are some of the saltiest tweets from our much-maligned generation.