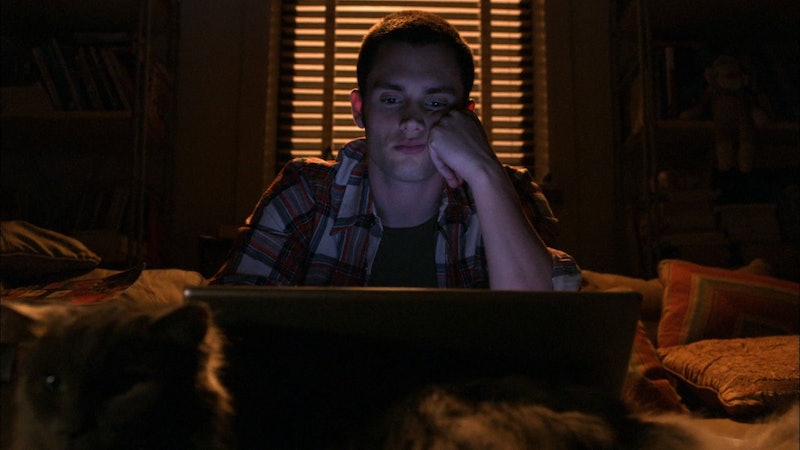 Many fans of the show remember exactly what we were doing when Gossip Girls' secret identity was revealed in the finale of the show. For some, it may have involved sitting slack-jawed in utter shock while taking massive sips of wine. But having rewatched the show from the start, there's actually a surprising amount of clues about who Gossip Girl is in the pilot episode of the show. In fact, it's probably one of the few episodes of the entire show that successfully hints at the idea that Dan Humphrey is actually Gossip Girl. Because beyond the pilot — if you recall — the concept becomes very hazy and confusing.

And that's because there's a lot of plot holes concerning Dan as Gossip Girl which conveniently go unanswered by the time the character confidently and casually reveals his secret identity in the finale. Like, why would he blog about his 15 year-old sister's sex life? And why in the world would he react with shock while reading a story on the Gossip Girl blog when he presumably wrote and published it himself? But back in the halcyon days of the premiere episode, Dan would just a lonely boy, looking to make himself known and find love with one of the most notorious young women of the Upper East Side.

Dan was also shady as hell, however. And while the pilot episode isn't so blatant about dropping hints about Dan's secret identity that we could have ever guessed it was him from the offset, the clues certainly do all add up with hindsight. And these are 18 of the most obvious ones...

More like this
Jesse Tyler Ferguson Had A Funny Run-In With A Fellow ‘Modern Family’ Alum
By Grace Wehniainen
S Club 7’s Jon Lee Continues To Reach For The Stars
By Rachel Mantock
The 'Hocus Pocus' Sequel Finally Has A Release Date & It Makes Total Sense
By Shannon Barbour and Radhika Menon
All The Sneaky Lindsay Lohan Movie Easter Eggs In Her New Ad, Explained
By Stephanie Topacio Long
Get Even More From Bustle — Sign Up For The Newsletter