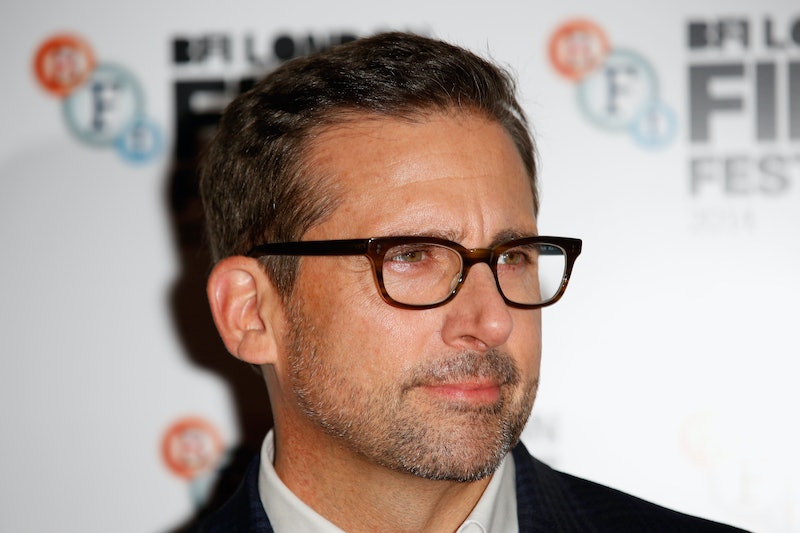 Stop what you're up to right this minute, because there is something so much more important for you to be doing. You need to look at these hot photos of Steve Carell. If you haven't heard the news, the former star of The Office is now considered hot. To be clear, this is something that many of us have known for awhile now, not just because the comedian was spotted walking around London during press for Despicable Me 3 looking fine in his clothing, all while sporting some gorgeous gray hair.

Yeah, Carell is one good-looking man who has deserved credit for his hotness for longer than only the past few days. And if you still don't think the Oscar nominee is "hot," then hopefully the following pictures will change your mind. Obviously, not everyone finds the same individual attractive, but everyone should absolutely hop on the "Hot Steve Carell" bandwagon. Why? Because he is hot, duh.

Also, this is by no means a joke. He may be known as the "funny guy" to most, but why can't a person who produces laughs also be hot? As for Carell, he has responded to the reactions he's recently received. "I am so sick of people just looking at me for my physical attributes," he joked to Entertainment Tonight. "It's just genetic. There's nothing I can do." He then added, "I'm bursting with pride. That's very nice."

With that, get ready to swoon hard, because here are some delightfully hot images of Mr. Steve Carell. You are so welcome.

2. When He Showed Off His Profile

Really, every side is his good side.

3. When He Posed With Minnie Mouse

4. When He Put The Minions To Shame

5. When He Escorted Carol Burnett

What a gentleman — and a stud.

6. When He Wore Shades

Those sunglasses don't know how lucky they are.

7. When He Looked Off Into The Distance

That pensive look is totally swoon-worthy.

8. When He Was All Casual

This is a good look on him.

9. When He Smiled Flawlessly

10. When He Was Basically James Bond

11. When He Went To A Baseball Game

13. When His Beard Was Spot-On

15. When He Was Totally Chill

Is it getting hot in here?

16. When He Got Serious For The New York Times

Channing Tatum and Mark Ruffalo, who?

18. When He Raised His Eyebrows

Even Michael Scott gets it.