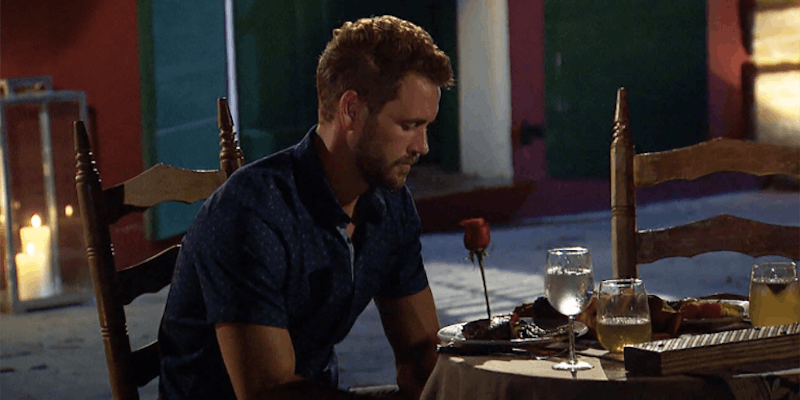 Monday night's episode of The Bachelor was pretty brutal. Nick Viall was letting women go without any hesitation. Not only did he drop Josephine, Jaimi, and my beloved Alexis during the rose ceremony (that was annoyingly in the beginning), but he dropped three women mid-date throughout the episode. It was dramatic to say the least. Needless to say, the fandom had A LOT to say on Twitter. There were so many good tweets that nailed week six of Nick's Bachelor season.

As soon as we actually got to see Whitney speak, she got the ax during her 2-on-1 date with Danielle L. Then, everyone's Bachelor fantasy brackets fell apart when Danielle L. also got sent home later on the same date. And although none of us thought Jasmine G. was going the distance, it was still pretty surprising when she got booted in the middle of the group date.

The ever-polarizing Corinne found a Raquel replacement with a woman named Lorna and seemed to be the only one who wasn't crying during the episode. And we finally heard Kristina's story and I'm pretty sure that a ton of fans are now rooting for her to become the next Bachelorette star if she doesn't end up with Nick.

At the end of the episode, the show really stepped away from it's usual formula when Nick just showed up at the women's hotel room, questioned if this process was going to work, started crying, and peaced out, leaving us all hanging until next week.

Throughout everything that went down, if you were thinking it, it was probably posted on Twitter. These are the tweets that said everything you need to know about key moments from the most recent episode.

1. When Whitney Suddenly Got A Lot Of Camera Time

Whitney's sudden increase in screen time did not bode well for her... Obviously.

2. When Alexis Got Sent Home

NOOOOOO. Not Alexis! Nick broke the hearts of every viewer with this one.

Did Robby Hayes style this date? Those shorts were so short.

4. When Kristina Shared Her Story

Wow. Kristina has really been through so much. Her story definitely brought some much-needed perspective to this show — especially after seeing Corinne have separation anxiety being away from her nanny. Kristina's story of immigration was also very appropriate given the conversation in politics these days.

5. When Nick Told Kristina That She "Brings Color" To His Life

This was the best thing Nick has said all season.

6. When Jasmine Pushed Corinne During Volleyball

I hit rewind a couple times to make sure my eyes weren't playing tricks on me when this happened.

7. When Raven Made Her Turnip Joke

We needed that adorable comic relief. Thank you, Raven.

8. When Everyone Started Crying At The Volleyball Game

This date was horrible. If only Alexis was there to lighten the mood.

9. When Rachel Struggled On The Group Date

I got so nervous when Rachel started to question the reality TV dating process. I totally don't blame her for feeling uncomfortable, but I just couldn't deal with it if she ever quit the competition.

10. When NO ONE Had Fun On The Group Date

While it makes sense that the women wouldn't want to play volleyball all day, especially after drinking, their words about competing for attention definitely brought to mind the entire premise of this show.

11. When Jasmine Flipped Out On Nick

I'm not sure what Jasmine thought was going to happen when she criticized Nick and made a choking joke that did not land. Goodbye, Jasmine.

Nobody knew what to expect from this date and no one got any of the references Whitney and Nick made about their "relationship."

13. When Corinne Was Drunk During The Group Date

14. When Whitney Got Sent Home

It was bound to happen. Sorry, girl. See you on Bachelor in Paradise.

15. When You Felt Vicariously Awkward During Nick's Dinner With Danielle L.

Nick looked like he wanted to be anywhere other than sitting at that dinner table with Danielle L. He was looking at the ground the entire time while they basically talked about nothing.

16. When Danielle L. Said She & Nick Were On The Same Page

Oh. My. God. You hated to see it, but Danielle had no idea what was happening at all.

17. When Nick Showed Up At The Hotel

The entire cast just happened to be gathered on the same two couches. Nick showed up without even knocking, cried, and left. Sure, I felt bad for Nick, but I'm sure he has contractual obligations to finish out the season, so I honestly wasn't worried about him leaving.

18. When They Showed The Preview For Next Week

FINALLY. The moment we have all been waiting for is about to arrive. Corinne is about to bring out her platinum va-jeen line and... cheer up Nick?

Is it Monday yet?