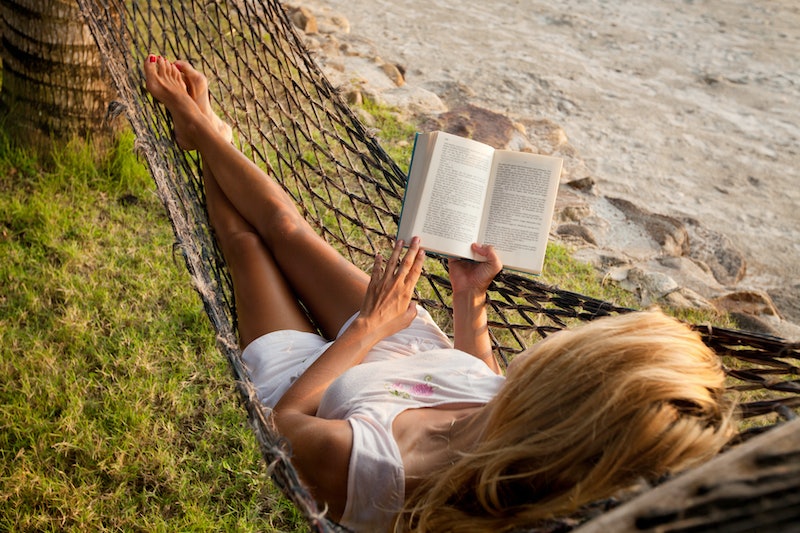 Reading is usually thought of as a solitary activity. But in the age of social media, it's actually hard to find yourself reading alone. Whether you're tearing apart a book in your book club, jamming your face into your book on the train to distract from your fellow commuters, or even just trying to get a page or two in while your significant other streams a prestige drama next to you, solitary reading isn't always an easy accomplishment.

Of course, when your life is a bit on the busy side, your commute just might be the only time you can manage to steal a few minutes to read. But there are just some books that you just have to read alone, because they're so much better when you do. So, if you're lucky enough to find yourself suddenly with a whole lot of solitude on your hands, it might be time to unplug and hole up and look for the best books to pass the time. Maybe your roommates are all out of town and you have no plans in the meantime, or maybe a big storm has ruined your party plans for the weekend, and it’s just you and your twiddling thumbs for a while.

Take advantage of the alone time, and pick up one of these books. You’ll soon find yourself screening phone calls and praying to get snowed in, because are the 19 best books to read on your own.

OK, so it’s not a whole book — it’s just one essay. But it totally merits its own mention, trust. "Self-Reliance" is famous for that line everybody misquotes. You know the one: “A foolish consistency is the hobgoblin of little minds.” Aside from taking a swing at consistency, however, Emerson also goes in on conformity and society in general, basically making the case for doing your own thing and giving society’s expectations the finger. If it were written today, it would probably have been published on his personal blog under the title “IDGAF and Neither Should You,” complete with .gifs of Beyoncé flipping her hair.

The Labyrinth of Solitude by Octavio Paz

Solitude is written all over this book… literally. Aside from being in the title, the book is very much about the true nature of man being one of solitude. Or as Paz himself writes, “Solitude is the profoundest fact of the human condition. Man is the only being who knows he is alone.” But mixed in with those existential questions, you also get some politics and social criticism about Mexican identity and the relationship between Mexico and the United States.

Did you sign up for a woodsy cabin retreat with your friends only for them to all cancel on you at the last minute, leaving you debating whether or not to risk being eaten by a bear to pee in the woods at midnight or test the limits of your bladder and hold it until morning? Well, never fear (er...I mean, fear a little bit. Bears are no joke), Thoreau is kind of the pro at doing the alone in the woods thing, and he’ll totally convince you it’s better without the beer keg and, y'know, other people.

Speaking of alone in the wilderness, Cheryl Strayed managed to get film rights out of her sojourn. But more than that, she also got all sorts of soul searching done, and probably some really strong calves. Wild’s a good book to bring along when you’re hitting the trail alone (just don’t forget the other essentials, or else the movie based off of your story will look more like 127 Hours).

Open City’s narrator is a wanderer. He moves throughout different cities meeting people, encountering history and interrogating himself. He might not always be physically alone, but he is very much in his own head throughout the novel. It’s the kind of book you’ll want to read and then spend a few days exploring your own city alone.

The Devil in Silver by Victor LaValle

If you’re the type who watches horror movies alone in the dark on a stormy night, then, first of all, you’re clearly insane (I’m more the hide under my covers and sleep with all the lights on kind of horror-movie watcher). But also, this The Devil in Silver is the psychological thriller for you. It’s got all the ingredients for a couple of solitary nights spent thinking every little noise your apartment makes is actually a monster waiting in the vents.

In Quicksand, a woman struggles to find her way in the world even as her race, her gender, and her own ideas isolate her. In a lot of ways it’s a book about how personal social issues are and how we ultimately have to sort them out for ourselves.

In Search of Lost Time by Marcel Proust

It’s likely that the only way you’ll get through this beast of a book is if you do have a whole bunch of alone time to kill. At seven volumes long, you’ll have quite the task ahead of you, and it’s seriously doubtful that you’ll be able to pull it off before you die if you’re only reading it in 10-minute bursts on the train. Not to mention, it’s basically one (or, rather, seven) big book of nostalgia, so when Proust’s madeleine sends you into reminiscing about your own past, you’ll probably be thankful for the solitude to wax nostalgic in peace.

“the soul... is by nature unmated, a widow bird; a bird perched aloof on that tree.”

You wouldn’t think a story about a woman planning for a party would be ideal for alone time reader, but even as the book jumps around into different character’s heads you see how even in a crowded room each of these characters is pretty much alone. I guess that could sound a little depressing (especially once you get into that suicide that happens later in the book…), but the story is a lot more complex than that, and you’ll appreciate it so much better in solitude.

Lesser known than his famous On the Road, Lonesome Traveler also takes a look at Kerouac’s life on the road, but it does so with a lot more reflection and slightly less partying. When you read it alone, you get to share in some of the self-reflections that Kerouac describes, and you’ll either come away from it with an interesting new look on yourself and the perks of solitude, or you’ll at least want to hit the road immediately and try to find work as a fire lookout (yep, that’s a real job).

If you suddenly have a wealth of alone time because your boo is halfway around the world and the Skype sessions are getting less frequent, then this is the book for you. The globe-spanning, years-long romance between Ifemelu and Obinze will help you cope with your own long-distance relationship. But it’s not just for long-distance couples. it's also about race, and culture and the intense loneliness of living and adapting to a different culture far away from home.

The Madman: His Poems & Parables by Khalil Gibran

“Thus I became a madman. And I have found both freedom of loneliness and the safety from being understood, for those who understand us enslave something in us.”

It’s short but mighty. Dealing with a character who’s had everything stripped away and must now confront just himself, The Madman is perfect for when you have nothing but yourself and time. It’s also pretty darn life-affirming. And since it’s made up of poems and short parables, that leaves you plenty of time to grapple with all of its big ideas.

The Book of Disquiet by Fernando Pessoa

The narrator of The Book of Disquiet is so very alone. But don’t go feeling sorry for him yet, because he likes it that way. Turns out, alone just isn’t that bad. Despite being considered a bit of a “bad” word, one that usually evokes looks of pity, ideas of “disturbed” individuals, or images of Emily Dickinson, alone is sometimes just the way some people prefer things. And Pessoa’s The Book of Disquiet is something like an (complicated) homage to the inner world, to the happily, willfully alone of the universe. Or, in Pessoa’s own words:

Freedom is the possibility of isolation. You are free if you can withdraw from people, not having to seek them out for the sake of money, company, love, glory or curiosity, none of which can thrive in silence and solitude. If you can't live alone, you were born a slave.

My Year of Rest and Relaxation by Ottessa Moshfegh

Who among us hasn't wanted to crawl into bed and sleep until things — responsibilities, illnesses, breakups, and other stressors — are all over? That's exactly what the narrator of Ottessa Moshfegh's My Year of Rest and Relaxation does. It's the year before 9/11, and she's already done with the world, so her psychiatrist prescribes her a cocktail of pharmaceuticals to keep her hibernating until everything turns out OK... or doesn't.

The Book of Polly by Kathy Hepinstall

Polly gave birth to her daughter, Willow, when she was in her late 50s, shortly after the death of the baby's father. Now, 10 years later, Willow is convinced that her mother will die early and leave her, the same as her father and two adult siblings have done. Desperate to draw even closer to her single mother, Willow throws herself into an investigation of Polly's past in this poignant, uproarious novel.

A Little Life by Hanya Yanagihara

A tear-jerker perfect for your next long stretch of uninterrupted reading time, Hanya Yanagihara's A Little Life centers on four men who met at their Massachusetts college and have since relocated to New York City. Chief among them is Jude, the linchpin in their little clique, whose personal traumas continue to haunt him.

The Lonely City: Adventures in the Art of Being Alone by Olivia Laing

Drawing from both the author's experiences living alone as a thirtysomething in New York City and major works of art depicting urban life, The Lonely City is the perfect memoir to read when you're going to be by yourself for an extended period. Pick this one up before you start feeling too down in the dumps.

When teenager Sunja becomes pregnant as the result of an affair with a married man, she gets a lucky break when Isak, a Christian missionary recuperating at her family's inn, agrees to marry her. Sunja follows Isak to Japan, where he lives with his brother and sister-in-law in a ghetto for Korean-Japanese immigrants. Unbeknownst to the young couple, however, the move places Sunja and Isak in close proximity to the man who fathered their firstborn son.

The Mercies by Kiran Millwood Hargrave

When the unpredictable sea claims their fathers, husbands, brothers, and sons, the women of Vardø — a 17th-century Norwegian fishing village — must band together to keep their daily lives intact. Three years later, a new man enters Vardø: Scottish witch-hunter Absalom Cornet, whose Norwegian wife, Ursa, is nothing like the village's women. Determined to draw what he sees as wayward women back in line, Cornet's heavy-handed ways threaten everything Vardø and its women have become.

This article was originally published on Sep. 10, 2015