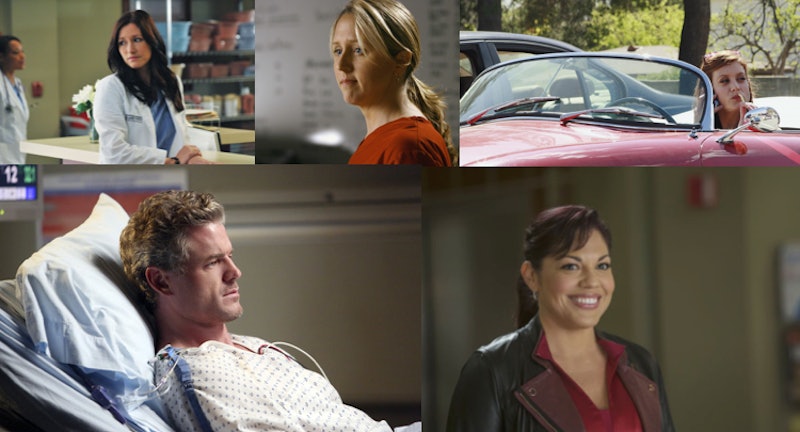 On Thursday, March 5, a legendary TV chapter came to a bittersweet close. Grey's Anatomy is saying goodbye to Alex Karev, and it's truly the end of an era; actor Justin Chambers has been a mainstay on fans' TV screens for a whopping 16 years, he's one of only four original cast members left on the long-running series, and he will be the last one of Meredith Grey's intern cohort to abandon her. First George, then Izzie, then Cristina, now Alex are all gone. Grey's Anatomy will never be the same.

But while the loss of an original cast member is a painful one, this is a storm that Grey's has weathered before. Nearly 20 main cast members have departed the series at various points over the past decade and a half. Some had long tenures, others only enjoyed brief stays; some went out in grisly fashion, others were given emotional (and nonfatal) farewells.

What kind of sendoff will Dr. Karev receive? That's been a lingering mystery ever since Chambers abruptly announced his departure from the series in January. Before Alex's farewell episode, "Leave a Light On," solves that lingering mystery, refresh your memory on all the various ways Grey's has handled other main characters' exits over the years.

How did he leave? On Burke and Cristina's wedding day, Burke realized that Cristina didn't actually want to get married, she was just doing it to make him happy. Rather than trap her in a marriage she didn't want, he left her at the altar… and left Seattle altogether, handing in his resignation letter at the hospital and moving out of his apartment without even saying goodbye.

Did he ever return? Yes, in Season 10, Burke popped up again to offer Cristina the job of her dreams.

How did she leave? After realizing she would never repair her marriage with Derek, Addison went to visit her friends in Los Angeles and was promptly offered a job at the Oceanside Wellness Clinic. She couldn't resist trading in foggy Seattle for sunny LA… or the chance to headline her own spinoff, Private Practice, which would run for six seasons.

Did she ever return? After her departure from Grey's, Addison returned once or twice per season for a while there — usually to consult on or ask for help with a puzzling medical case — but the last time she graced Grey Sloan with her presence was in Season 8.

How did she leave? When she learned the truth about Denny Duquette — that Izzie had essentially stolen a heart for him, thus dooming her own patient to die, and had faced virtually no repercussions for it — Dr. Hahn quit the hospital, and left her girlfriend, Callie, in protest.

Did she ever return? Nope. Erica vanished into the Seattle Grace parking lot, never to be seen again…

How did he leave? Although Grey's has a reputation for killing off main characters left and right, only four of the 18 departures actually ended in death. The first was George, who succumbed to his gruesome injuries after getting hit by a bus in the Season 5 finale. He and Izzie, who was battling cancer at the time, flatlined at the same moment; but while she returned to the land of the living, he rode the mystical elevator into the afterlife.

Did he ever return? Other than appearing as a ghost via some stock footage in Season 16's Halloween episode, "Flowers Grow Out of My Grave," no.

Final episode: Season 6, Episode 12, "I Like You So Much Better When You're Naked"

How did she leave? After making a serious mistake with a patient, Richard was forced to fire Izzie. Thinking her newly-wedded husband Alex had something to do with it, Izzie ghosted him. When she returned later that season to apologize him and inform him that he was cancer-free, Alex refused to take her back, standing up for himself and letting her know he deserved someone who wouldn't leave him.

Did she ever return? Not yet… but could she have had something to do with Alex's departure? TBD.

How did she leave? When half the show's surgeons were in a plane crash on their way to another hospital, Lexie was the unluckiest of the bunch. A large part of the wreckage landed on top of her, and she died of her injuries before help could find them.

Did she ever return? Lexie was another of the ghosts Meredith saw in Season 15, but other than that she remains a distant memory.

How did she leave? After receiving a prestigious job offer elsewhere, Teddy was on the verge of turning it down because her bestie Owen was going through a rough patch with Cristina and she didn't want to leave him alone. Knowing she was passing up too good of an opportunity to miss, Chief Hunt forced Teddy's hand by firing her.

Did she ever return? You bet! Kim Raver's Dr. Altman is the only series regular to leave the show and later return as a full-fledged series regular again. She popped up again in Germany in Season 14 and returned to Seattle full time the following year.

How did he leave? Although Lexie's lover made it out of the Season 8 finale still breathing, he didn't long outlive her. In the Season 9 premiere, it was revealed that McSteamy had succumbed to his plane crash-related injuries, and the second episode of the season flashed back to show the plastic surgeon's final hours.

Did he ever return? Only as a spirit last season, otherwise no.

How did she leave? When Cristina's ex, Dr. Burke, returned from out of the blue to offer her a job as chief of a state-of-the-art medical research facility in Switzerland, it was simply too good of an opportunity to pass up, even if it meant leaving her "person" behind in Seattle.

Did she ever return? Although fans have not yet seen Cristina in the flesh since her departure, she has remained an (unseen) presence in Meredith's life ever since; the friends frequently text, and Cristina recently sent Mer a "present" in the form of McWidow.

How did he leave? When he learned that his mentor, Dr. Yang, was leaving for Zurich, Shane begged her to take him with her so he could continue studying under her expertise.

Did he ever return? Nope! We barely knew ye, Shane.

How did she leave? Richard Webber fired Leah, telling her that, while she was a good doctor, surgery was the wrong field for her, and encouraged her to go into medical research instead.

Did she ever return? Yes, Dr. Murphy returned in a recurring capacity in Season 13; she hadn't taken Richard's advice and had honed her surgical skills elsewhere, and then applied for a transfer back to Grey Sloan. But as randomly as Leah returned, she randomly disappeared again after only a handful of episodes.

How did he leave? After witnessing a car crash, Derek scrambled to help and saved four people's lives. However, when pulling away from the crash site, Derek was rammed by a semi; after being taken to the hospital (not Grey Sloan), his incompetent doctors failed to properly diagnose his brain bleed, and he was brain dead before they realized what was going on. A bereft Meredith was forced to pull the plug on her husband.

Did he ever return? Hard to come back from that, but he did haunt the halls of Grey Sloan one more time on the Day of the Dead.

How did she leave? When her girlfriend, Penny (one of the doctors responsible for Derek's death, no less), won a grant to study at a research facility in New York, Cristina decided to move across the country to be with her. Although this resulted in a bitter custody battle between Callie and her ex, Arizona, over their daughter, Sofia, they were able to reconcile and come to an agreement before Callie left.

Did she ever return? No; and with Arizona gone now, too, it's unlikely she ever will.

How did she leave? After a traumatic incident that ended with her blowing up a rapist and setting fire to much of the hospital, an injured Stephanie decided to take a step away from medicine. She'd practically grown up in hospitals, having been diagnosed with sickle-cell disease when she was 5; after this brush with death, she wanted to stop saving other people's lives and finally live her own instead… so she quit.

Did she ever return? No, but hopefully she's out there somewhere enjoying hiking and traveling and fresh air.

How did he leave? When the love of his life (and Owen's sister) Megan Hunt was discovered alive after years of captivity in Iraq, Nathan quit Grey Sloan to move to California and start a new life with her and her adopted son, Farouk.

Did he ever return? No, but at least he got his happy ending.

How did she leave? Arizona was surprised to learn that her daughter, Sofia, was stealing money from her classmates; but when she learned that the money was so Sofia could buy herself a ticket back to New York to be with Callie, Arizona made the tough decision to relocate across the country so Sofia's two moms could be closer.

Did she ever return? No, but it's nice to imagine that Callie and Arizona are happily co-parenting Sofia and living it up in NYC.

How did she leave? After reconnecting with her ex-fiancé Matthew, April suffered a near-fatal accident, and then miraculously recovered. When Alex and Jo's wedding turned into a disaster, the reunited lovers took the opportunity to have an impromptu ceremony themselves. After a crisis of faith, April found God again and quit Grey Sloan to work at a clinic that provided health care access for Seattle's homeless population.

Did she ever return? Not yet, but if the show is seriously rekindling this Jaggie nonsense, I'm gonna need her to come back and knock some sense into her ex-husband.

How did he leave? During the Season 13 finale explosion, Ben found himself inspired by the heroics of the firefighters who responded to the blaze, and spent the next season training to join their ranks. Halfway through Season 14, he left Grey's as a full-time cast member to headline the spinoff Station 19 instead.

Did he ever return? Not only is Ben a main character on Station 19, he also still appears semi-regularly on Grey's in a recurring status.

How did he leave? Justin Chambers announced that he was leaving Grey's Anatomy shortly after "My Shot," leaving the writers room to find a way to write his character off. While the character's last appearance was in Meredith's big trial episode before the midseason hiatus, coming to the defense of his "person," he then supposedly went to Iowa to visit his mother. Weeks later, it was revealed that Alex had gone to Kansas to see Izzie Stevens, of all people, who had his twins using the fertilized embryos she had frozen when she had cancer. He wrote everyone a letter, most notably his wife Jo, who he just up and left.

Will he ever return? He left Jo his stake in Grey Sloan, so it doesn't seem that Alex will ever be coming back. Then again, in a few years, it's possible that Chambers could return for some reunion episode, a stray plotline, or... dare we even suggest it? A series finale.

More like this
Shonda Rhimes Responded To The Surprise Exit Of A Day 1 'Grey's Anatomy' Figure
By Grace Wehniainen
'The Last Of Us' Episode Schedule Competes With The Super Bowl & Oscars
By Brad Witter
Grammys Host Trevor Noah Made Adele's Dream Of Meeting The Rock Come True
By Brad Witter
Pedro Pascal Barely Got Through The "Lisa From Temecula" 'SNL' Sketch
By Stephanie Topacio Long
Get Even More From Bustle — Sign Up For The Newsletter
From hair trends to relationship advice, our daily newsletter has everything you need to sound like a person who’s on TikTok, even if you aren’t.