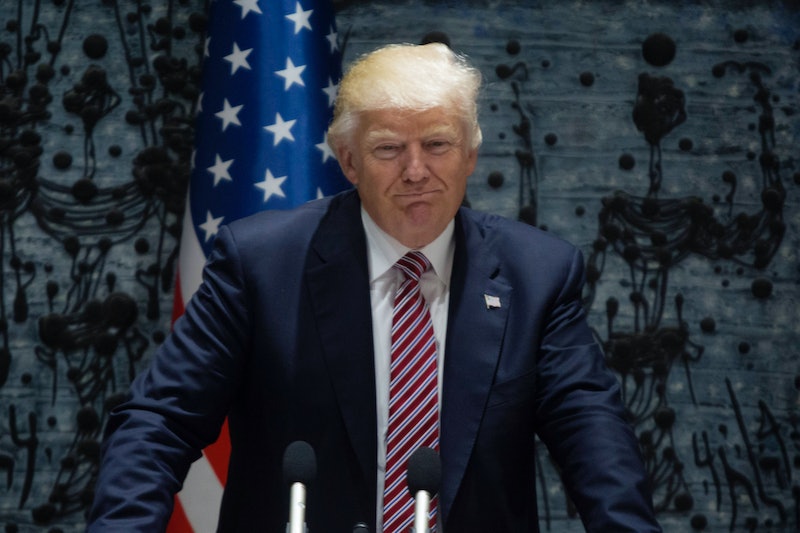 This past weekend, President Donald Trump began his foreign trip to the Middle East and Europe. He first arrived in Saudi Arabia on Sunday, where he called on Muslims to drive out terrorists. On Monday, Trump traveled to Jerusalem and became the first sitting president to visit the Western Wall. Obviously, there was a photo-op involved as Trump took time to pray at the Wall. Unfortunately for the president, the photo of him touching the wall stripped of context created some very funny Trump Western Wall memes.

The Western Wall is the holiest site for Jewish prayer. Trump stood at the wall for a minute to pray, swaying back and forth, and then placed a note in a crevice, which is a custom for many who visit the wall. Photos of Trump raising one hand to touch the wall circulated, and many people couldn't resist comparing it to another wall that Trump has promised to build.

Surprisingly, the Western Wall memes are not even the first meme that has come out of Trump's Middle East and European trip. While in Saudi Arabia, Trump participated in the opening of the Global Center for Combatting Extremist Ideology, which will try to combat terror online. Trump joined Saudi King Salman and Egyptian President Abdel Fattah al-Sisi for a photo-op, in which the three leaders placed their hands on a glowing orb. The mystery of the glowing orb launched a series of memes ranging from comparisons of the Lord of the Rings films to Space Jam.

While the Western Wall is certainly a serious and holy site, it's difficult not to indulge in some funny imagery and commentary as Trump placed his hand on it.

Maybe he can borrow it?

If you want something a lot and you write a note about it, maybe your wish will come true.

5. Longing For One To Call His Own

He just wants something for himself.

Nothing can tear them apart.

The Western Wall was built for different reasons.

10. Searching For Tips About Wall Building

She'll never tell how she was funded.

Unfortunately, the wall was as silent as a stone.

12. Anybody Know The Contractor For This Property?

What if this is the whole reason for the trip?

The greatest love story of its time.

14. Debating Whether He Grabbed The Wall

Luckily, only one party needed to consent in this case.

15. Maybe This Is What He Wrote

Will Trump ever stop bragging about his victory?

Unfortunately, it's not a wishing well.

17. You Can Pick One Up At The Gift Shop

It's not that easy.

Suspicious timing that a sinkhole opened up at Mar-a-Lago.

Because why would Trump settle for a Western Wall when he can build a Southern Wall? Hopefully, the rest of Trump's trip isn't quite so eventful.