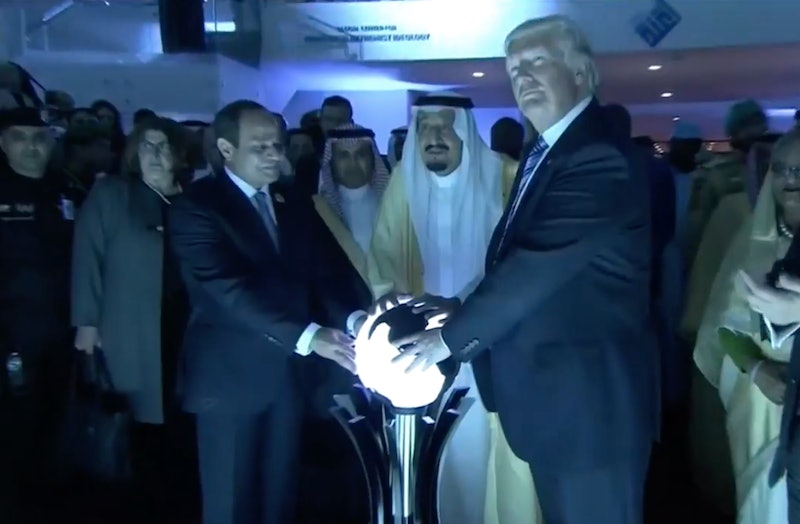 A photo of Trump touching a mysterious glowing orb while abroad in Saudi Arabia made the rounds online Sunday afternoon. From jokes about those electricity balls that make your hair stand up straight to memes comparing Trump to a wizard using a palantír, there was no shortage of hilarious tweets. But lots of people were also wondering what the orb Trump was touching actually was. And no, it wasn't a magic crystal ball meant to see the future or suck souls out of human bodies.

On Sunday, Trump helped open the brand new Global Center for Combating Extremist Ideology, a center that aims to defeat terrorism specifically by combatting the ideology online. At the grand opening, Trump joined Saudi King Salman and Egyptian President Abdel Fattah al-Sisi for a photo opportunity they likely didn't realize would turn into one big joke.

The three men placed their hands on what appears to be a glowing globe — it is the Global Center for Combating Extremist Ideology, after all — and smiled to get their picture taken. As shown in a video from The Washington Post, the leaders gathered around the globe that stands prominently in the middle of a large room where, assumably, the fight against terrorism will take center stage. According to a Reuters report, the Muslim World League's Secretary General Mohammed al-Issa said the fight against extremism must occur outside of just the military, because "these groups can only be defeated if we defeat their ideology." Issa said Saudi Arabia is not only fighting the message of hate through this new center, but that it has already established initiatives to counter "misguided" messages about Islam, to monitor and ISIS and al-Qaeda online, and to shutter the websites where terrorists talk.

Earlier, Trump had given a speech that took a remarkably different stance on Islam and Muslims than he has portrayed in the past. Calling Islam "one of the world's great faiths," he called on Muslim leaders to act against terrorism.