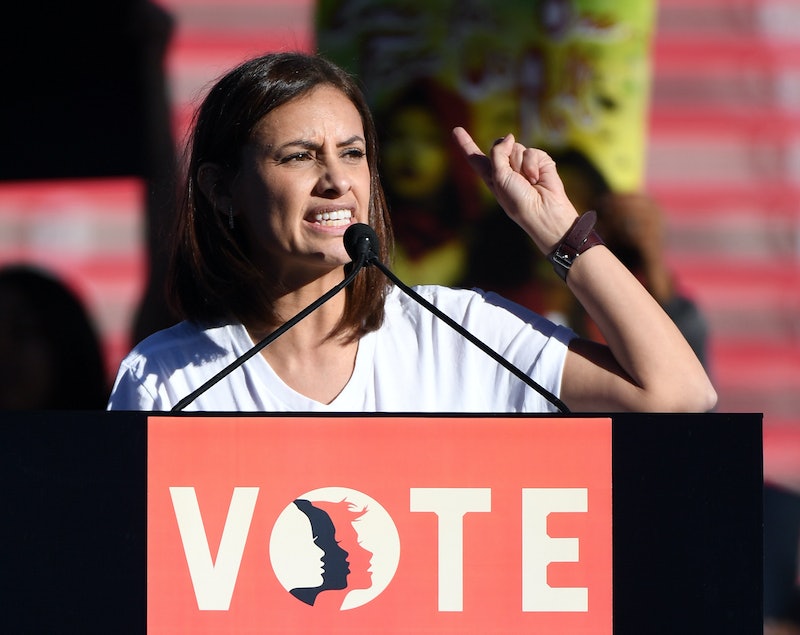 As of Wednesday afternoon, more female Senate candidates are running in 2018 than in any previous election cycle. According to the Associated Press, 41 women have qualified to run for the Senate in the November election, beating the previous all-time high of 40 female candidates that ran in 2016. The 2018 roster of candidates officially broke the record on Wednesday, when Leah Vukmir, a Wisconsin state senator, filed paperwork to run against incumbent Sen. Tammy Baldwin, according to AP.

It's not just the Senate, either: Vox reported in April that more women — 309, to be exact — are running for the House of Representatives in 2018 than in any previous cycle.

Although there's probably no single explanation for the rise in female congressional candidates, it's been suggested that Donald Trump's victory in the 2016 election — and, just as importantly, Hillary Clinton's loss — is largely responsible for the surge in interest. EMILY's List, an organization dedicated to electing pro-choice women to office, told the Washington Post that it was approached by 900 women in 2015 and 2016 about possibly running for office; in the year after Trump's election, however, over 26,000 potential female candidates reached out to the organization, according to TIME.

“The thousands of women who have reached out to EMILY’s List since the election are a testament to the energy, determination, and resistance we’ve seen from Day One of Donald Trump’s presidency," EMILY's List president Stephanie Schriock said in 2017. "For women, running for office is a direct response to the dangerous agenda pushed by a president and Republican Party determined to turn back the clock on women’s progress."

Congress has long been dominated by men. According to U.S. government data, there have been a total of 1,971 U.S. senators since the Senate was founded, but only 52 of them — or less than three percent — have been women. Currently, 23 women serve in the Senate; 17 are Democrats, and six are Republicans. Although that's more than at any other point in U.S. history, the fact remains that women comprise less than 20 percent of Congress as a whole, despite making up more than half the U.S. population.

Nevertheless, research has shown that women, on average, are more effective lawmakers than men. According to several studies of recent U.S. congressional sessions, the average female lawmaker sponsors more bills, gets more legislation passed into law, and brings home more federal money to their home districts than their male counterparts.

Although more women are running for office now than ever before, that pool is dominated by Democratic candidates. Of the 440 women running for House seats, 332 are Democrats, the Center for American Women and Politics (CAWP) at Rutgers University found. And the majority of female Senate candidates are Democrats as well, although the gap is smaller.

This is a reflection of broader trends in the two parties. The number of Democratic women running for the House has been on the rise since the mid-1990s, CNN reported in April, but the number of female Republican candidates in each cycle has more or less stagnated since 1998. In every cycle since 1990, 60 or more female Democrats have run for Congress; the Republican Party, meanwhile, has never fielded 60 female candidates in one cycle. According to CNN, less than 10 percent of Republican lawmakers in Congress are women, while around one-third of Democrats are.

"The march toward gender equity in the Senate is inexorable," former Sen. Carol Moseley Braun, the first black woman elected to the Senate, told AP of the 2018 field of candidates. "It’s a matter of attitude, and sends the message to young women they can do whatever they want or can.”