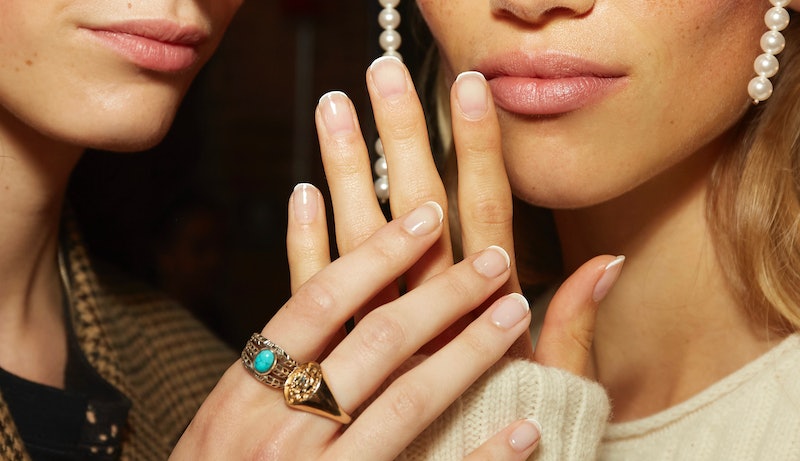 We are officially moving into a revival of the early-2000s, and French manicures are leading the surge. 2019 versions of French manicures were all over NYFW this fall, and the photos might make you reconsider your opinions about the white tips. NYFW is something of an authority when it comes to what's fashionable and trending for the upcoming year. So if designers are seeing a comeback with French manicures, then the bleached tips are prone for a resurgence.

For the last decade, French manicures were seen as outdated and just a little cheesy. It signaled a time when we walked around in velour tracksuits, when chunky highlights were the epitome of cool, and when rhinestone embellished wraparound shades were the look du jour. Phrases like "juicy" across butt cheeks and frosted pink gloss were peak cool, but they all eventually fell out of favor as fashion trends marched forward.

But now with the resurgence of early Noughties fads in both fashion and beauty, French tips are starting to be re-examined again. The world groaned when Kim Kardashian got a French manicure in Jan. 2019, but it now seems she was just ahead of the curve. Now that the fashion world brought the tips onto its runways, French manicures are starting to look interesting again. Check out all the different ways that French tips have been worn — both on catwalks and sidewalks.

The Khaite Spring/Summer 2020 show on Sept. 7 took a more minimal approach towards the classic French nail. Created by Betina Goldstein for essie, Goldstein used a light pink base and created a very thin white nail. “The look is romantic, clean, and minimal,” Goldstein said. This is a far cry from the long, chunky French manicures of the 2000s.

Christian Siriano also introduced a French mani to his 2020 NYFW show. But Siriano's version was nowhere near typical. Julie Kandalec used essie products to pull off the look, and was inspired by the seafoam green seen throughout the collection. Kandalec combined a "painterly" look with a futuristic touch to create the bespeckled French manicure.

Over at Kith, Goldstein decided to create a mirrored French mani. Rather than just painting the tips white and calling it a day, Goldstein also colored the moons on the nails white, creating a circular look.

If you don't like the straight-across look of a classic French, then try a wavier version for a more contemporary version.

Kardashian's original French mani was a subtler version of the Noughties' version. It consisted of the same shape, where the top of the nail is filed straight, but the sides are painted at a curve. Kardashian kept it contemporary by keeping the length short and clean.

With all the different versions of French manicures in 2019, anyone can find a version they like. Go wavy, try it with green tips, or paint in your moons. It's all fair game.