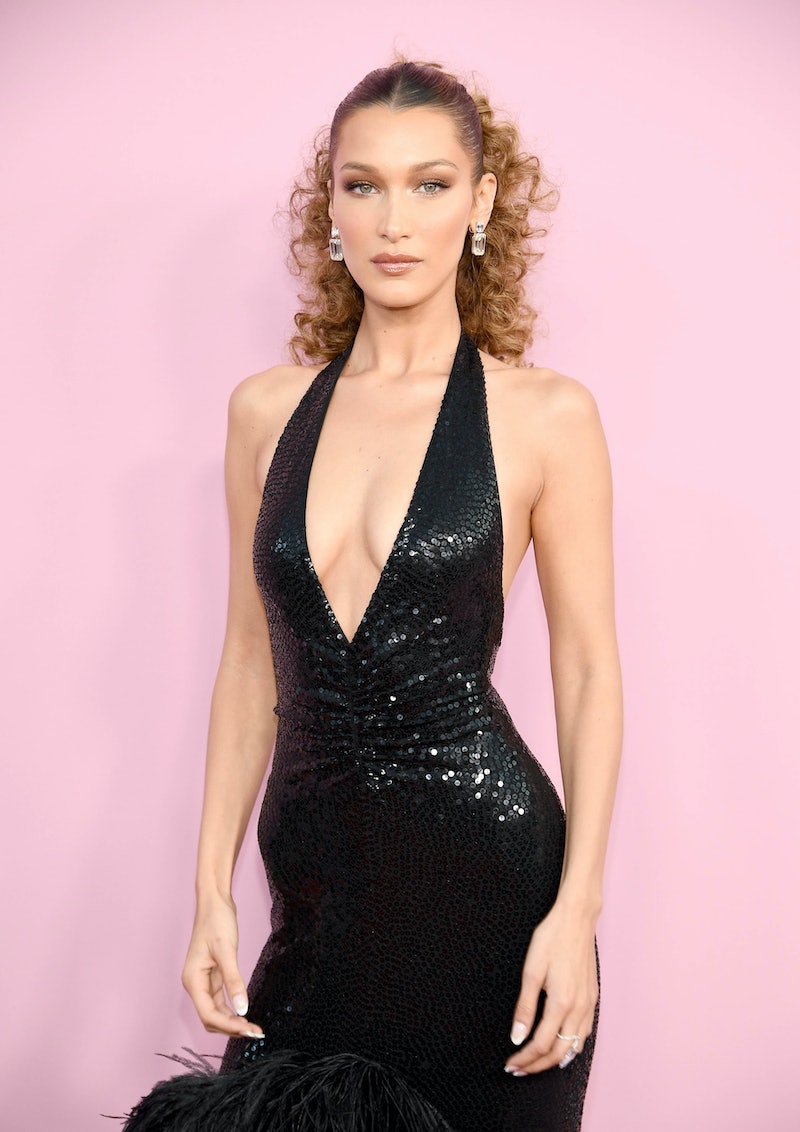 Bella Hadid might have been born in 1996, but she's all about reviving early-2000s fashion. From wearing Carrie Bradshaw-approved baguette bags to wearing Lizzie McGuire-like vinyl leather outfits, the model is bringing back post-Y2K fashion. And in her latest move, Bella Hadid wore a 2000s going-out top, single-handedly reviving the dead clothing category.

Going-out tops were a special breed of party wear. You usually paired them with low-waist jeans, and they were unusable during the day time. They usually took the shape of halters, spaghetti strap tanks, and tube tops, and they veered towards silk textures and sequined motifs. They often came in bold jewel tones and had a little ruching added in like outfit parsley.

Hadid revived this clothing option while on a vacation in Mykonos, Greece with friends and her sister, Bella Hadid. The getaway was in honor of their older sister, Alana Hadid's, birthday. While going out with the birthday group on July 27, Hadid decided to put on a going-out top for dinner and drinks. The outfit consisted of a collared halter top in a shiny, bright orange hue. The top had ruching going down the center, and the bottom-half of the shirt flapped open to reveal Hadid's midriff. It looked like a shirt straight from Charlotte Russe circa 2005.

Hadid then paired the top with low-rise jeans (of course,) but the jeans embodied the early-2000s in more ways than one. Not only were they low rise, but the pants also had acid washed seems going down the middle of the legs. The jeans also didn't have pockets, because no one did pockets in the early 2000s. We just carried stuff in our clutched fists.

But the fashion throwbacks didn't end there. Hadid also wore a baguette Louis Vuitton shoulder bag, and it was accessorized with a claw clip on the strap. So if Hadid got too hot in the Mykonos heat, she could scoop up her hair and clip it back. If you went to high school or college in the early 2000s, chances are you will see this very outfit in your old Facebook photos.

Hadid has been pushing early-2000s trends for a while now, and the model always veers towards Y2K-inspired looks for her off-duty outfits. While everyone was busy wearing '90s inspired tiny sunglasses, Hadid had moved onto rectangular colored frames that were so teen-Olsen-twins.

Hadid also championed the all denim outfit, complete with a bustier denim top and a mini baguette bag. This was indicative of Britney Spear's and Justin Timberlake's iconic 2001 all-denim couple's outfit. But Hadid made it fashion, complete with a side parted, slicked down bun.

Hadid also made waves when she marched down the Versace runway for that label's spring 2020 menswear show in Milan wearing a visible thong. As in, she had dress pants on with thong straps peeking out from underneath them like it was 2001.

Hadid is the poster child for early-2000s fashion, and she is bringing back everything from going-out tops to visible thongs. We're ready for it.

More like this
Bella Hadid's Best Runway Looks Of All Time: From Paris, Milan, & More
By Allie Fasanella
Harry Styles’ Red Carpet Looks Have One Thing In Common
By El Hunt
15% Pledge Director LaToya Williams-Belfort On The Impact Of Supporting Black Business
By Dominique Norman
I Can’t Stop Thinking About Emily Ratajkowski's Exposed Thong Look
By Allie Fasanella
Get Even More From Bustle — Sign Up For The Newsletter