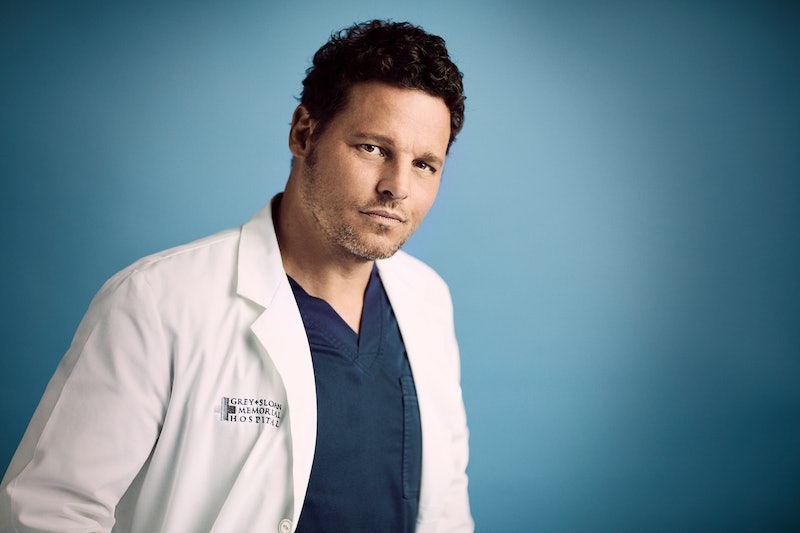 For 16 years, Justin Chambers has been a constant in the lives of many TV watchers, providing countless hilarious, moving, memorable moments as Alex Karev on Grey's Anatomy. He has been a rock for the show, one of only four original cast members left a decade and a half into the series' run, and one of only two of the original crop of interns left, along with Meredith — which just makes it that much harder to say goodbye. It turns out that the last time viewers saw Alex was the last time viewers will ever see Alex, even if they didn't know it, as Justin Chambers announced during the show's winter hiatus that he (and therefore Alex) was leaving Grey's, and that his final episode had already aired on Nov. 14.

Of course, Dr. Karev is far from the first main cast member to depart the long-running medical soap; over the years, fans have gotten used to saying hard farewells to beloved characters like Derek, Cristina, George, Izzie, Callie, Arizona, April, and many more. But most of those characters either got a tragic, memorable death or an emotional, satisfying sendoff… which makes Alex's sudden vanishing even more bizarre. The last time viewers saw the character, he was speaking in defense of Meredith at her trial; in the next episode, Season 16's midseason finale, it was mentioned that he had gone to visit his mother, but no indication was given that he would never return.

While viewers continue to grapple with this sudden loss, take a moment to look back at some of Alex Karev's best moments over the last 16 years, as he transitioned from "Evil Spawn" into Meredith's reliable "person" — a truly remarkable character arc.

1. When He & Cristina Competed

Season 1, Episode 2: "The First Cut Is The Deepest"

Alex truly earned his "Evil Spawn" reputation in Season 1, talking down to nurses and posting pictures of Izzie's lingerie shoot around the locker room. But he still had his endearing, comedic moments, such as when he and Cristina competed to see who could deliver the most test results while dodging the most hugs from grateful, tearful patients.

2. When He Gave George Syphilis

3. When He Comforted Izzie After Denny's Death

14 years later, and this is probably still THE iconic Alex Karev moment. Upon entering Denny's hospital room and seeing Izzie sobbing in her prom dress, in bed next to her recently deceased fiancé, Alex tenderly scooped her up and held her while she (and the audience) cried.

4. When He Kissed Addison

Over the course of 16 seasons, Alex would go on to have many relationships, two marriages, and at least one true love. Compared to his long-term couplings with Izzie and Jo, Addison was but a blip on Alex's radar; but in terms of pure sex appeal, their brief fling together was one of the show's most sizzling.

5. When He Tried To Take Care Of Ava/Rebecca

Although Alex had earlier told ferry boat victim Ava/Rebecca to go back to her husband because he, unlike Alex, was a "decent guy," Alex proved how decent he actually is after the mentally unstable former patient attempted to take her own life. He insisted he could take care of her because he'd done it before, taking care of his own mentally unstable mother — a moment that revealed a lot about the character's past and shed light on his increasingly complex personality.

6. When He Married Izzie

Although their happily ever after didn't turn out to be happily forever after, it was still beautiful in the moment, as the longtime on-again-off-again couple finally said their vows and tied the knot. The moment was made even more meaningful by the fact that Izzie was potentially dying of cancer, and the ceremony had been gifted to them wholesale by Meredith and Derek, who were originally meant to be the ones getting married.

7. When He Screamed At A Bear

After getting married, Alex and Izzie realized they needed to move out of Meredith's house into a place of their own, so they set up temporary residence in Derek's trailer instead. That peaceful honeymoon in the woods came to an abrupt end when a grizzly bear surprised Alex on the front porch as the doctor was headed to work in the morning.

8. When He Performed The Kangaroo Hold

Realizing that skin-to-skin contact will help improve an ailing baby's condition, Bailey ordered Alex to take off his shirt and hold the tiny patient to his chest, the sight of which was an odd combination of sweet and sexy — which is a good way to sum up Alex Karev, when you think about it.

9. When He Stood Up For Himself

Season 6, Episode 12: "I Like You So Much Better When You're Naked"

Unfortunately, Alex and Izzie's fairytale marriage didn't last for long; their relationship was thrown into turmoil when Izzie was fired from the hospital and left Alex without saying goodbye, assuming he had something to do with it. When Izzie returned to tell Alex she was finally cancer free, Alex told his wife he was happy for her, and thanked her for helping him realize he was a good man… but that he realized he was a good enough man that he deserved someone who would stay with him.

Alex continued to prove he's surprisingly good with patients — especially children — when he comforted a nervous young patient, who found relief in music but couldn't take her iPod into the machine, by singing her favorite song while she received her scans.

Legions of Merlex shippers got to see their dream briefly come true — well, sort of — when Grey's aired this alternate reality episode that depicted a universe where Ellis Grey never developed Alzheimer's, Meredith wasn't dark and twist, and she was happily engaged to Alex Karev, of all people. Well, happily until she found out her fiancé was cheating on her with April Kepner. Apparently Alex is "Evil Spawn" at some point in all timelines.

12. When He Stayed With His Dying Father

Alex's dad's second family couldn't find it in themselves to forgive him and left while he was on death's doorstep after refusing to see him. Having absolved Jimmy in the previous episode for leaving his family when Alex was just a kid, Dr. Karev sat by his absentee father's bedside and kept him company as he breathed his last breaths.

13. When He Comforted Meredith After Her Attack

After Meredith was brutally attacked by a patient and wound up with severe injuries, Alex comforted his "person" by climbing into bed with her and holding her while she cried. Then he made her laugh by pointing out how much snot she'd gotten all over herself.

14. When He Asked For Waffle Sundays

In this touching moment, Alex told Meredith he wanted to enjoy "Waffle Sundays" with her and her kids before he was locked up in prison for assaulting Dr. DeLuca. He also told his "person" to be nicer to her sisters since, as he warned her, "I'm not gonna always be around." Little did he (or we) know how prescient those words would turn out to be.

15. When He Apologized To DeLuca

They say it's better late than never and, while Alex could have apologized to Andrew sooner for beating him up, at least he finally did the decent thing and owned up to his mistake — something the "Evil Spawn" of Season 1 never would have been capable of doing.

16. When He Took Out A Library Card

After taking a road trip to reconnect with his estranged mother, Alex was both pleased to see her doing so well, and sad to learn that having her son back in her life would be too much disruption to the routine that had allowed her to reach a mentally stable place. But he found a way to maintain her routine so they could have one last chat, asking to open up a library card while they said goodbye.

Second time's the charm? Although Alex's first marriage didn't work out, it's hard to believe his wedding to Jo won't stick. Their romantic and impromptu exchange of vows on a ferry boat was romantic and perfect — if not legally binding.

18. When He Became Chief Of Surgery

When Bailey decided to take a step back from her position as Chief so she could re-focus more on medicine and less on administrative duties, she asked Alex to step in for her on an interim basis. And in the blink of an eye, Meredith's "person" also became her boss.

19. When He Put His Job On The Line For Meredith

When Meredith was on the verge of being fired by Bailey and Catherine for insurance fraud, Alex and Richard jumped into the fray to back her up and put their own jobs on the line to defend their colleague. Unfortunately, that selfless act ended up backfiring as all three doctors were fired by an irate Bailey.

When Jo checked herself in to a clinic to deal with the emotional trauma of learning the truth about her conception, she gave Alex an out: as they weren't legally married, he could walk away at any time. But when Jo checked out a few weeks later, Alex was there waiting for her… and got down on one knee to re-propose to Jo and promise that he wasn't going anywhere.

21. When He Defended Meredith

Meredith's "person" really rose to the occasion when Dr. Grey was put on trial for insurance fraud. First, he brought out a large group of Meredith's former patients who had arrived to show their support; then he read out loud a letter written by Cristina in Meredith's defense, and had many more letters from other beloved departed characters as well, like Callie and Arizona and April and Addison. A truly tear-jerking moment.

You will truly be missed, Evil Spawn. Grey's Anatomy will simply not be the same without you.

More like this
Shonda Rhimes Responded To The Surprise Exit Of A Day 1 'Grey's Anatomy' Figure
By Grace Wehniainen
All The ’70s Easter Eggs You Missed In 'That ’90s Show'
By Grace Wehniainen
The 8 Best Aidan Shaw Moments On 'Sex And The City'
By Grace Wehniainen
Netflix Shut Down 'Bridgerton' S3 Rumours About A “Very Dark” Storyline
By Bustle
Get Even More From Bustle — Sign Up For The Newsletter
From hair trends to relationship advice, our daily newsletter has everything you need to sound like a person who’s on TikTok, even if you aren’t.