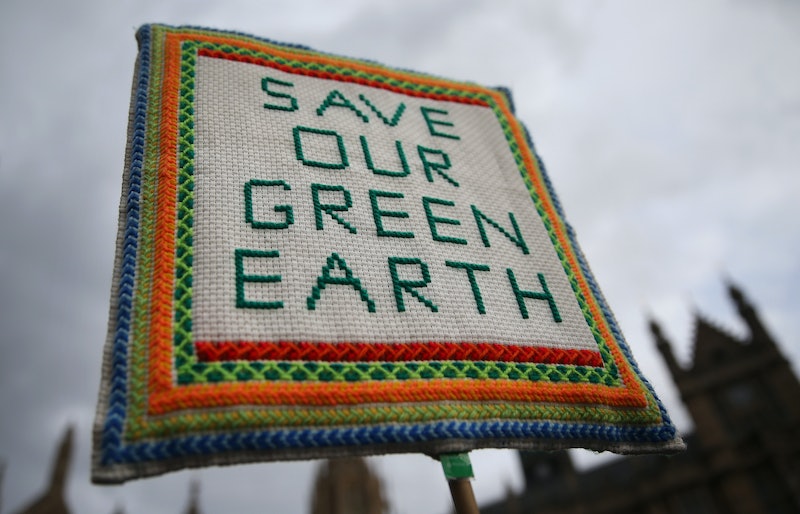 The March for Science is fast approaching, coinciding with Earth Day on Saturday, April 22. And whether you're fascinated by the stars or prefer to focus on our own planet, joining the protest is a worthwhile way to spend your weekend. Those searching for creative March for Science sign ideas to kick-start their own brainstorming sesh need look no further. Before you put marker to cardboard, peruse this list of original and fun placards from fellow protesters to ignite your imagination. It seems utterly unbelievable that in the 21st century, we have to defend fact-based science as "real" and necessary — but here we are, ready to break out our multi-colored Sharpies and poster board in the name of supporting science.

Science- and evidence-based policy-making is increasingly under attack under the Trump administration. There are "budget cuts, censorship of researchers, disappearing datasets, and threats to dismantle government agencies harm us all, putting our health, food, air, water, climate, and jobs at risk," the protest's website notes. These problems aren't going away; indeed, the bevy of "alternative facts" floating around could do irreparable harm. This Earth Day, anyone who values science and truth might think about heading on over to the March for Science website to find a local gathering. There are currently 374 marches set to take place in the United States, as well as the main gathering beginning at the base of the Washington Monument on Saturday morning before the march itself proceeds through the streets of Washington, D.C. starting at 2 p.m. Those who cannot attend can also watch the live-stream.

Since the election, we've seen a bounty of interesting and creative signs at numerous protests, some of which are so unusual or clever that you just have to stop everything and Instagram them. On social media, these signs and statements have a second life, continuing to spread words and ideas across the internet. The March for Science is the start of a global movement championing science's vital role and yet another chance to make our voices heard — after all, the facts don't lie. So grab your bus ticket and check out a few of these creative sign ideas in support of science!

More like this
13 Selfie Instagram Caption Ideas That Exude Main Character Energy
By Jessica Booth and Emma Carey
25 Things I've Reduced My Life To, In Addition To WFH In My PJs
By Ginny Hogan
How To Change Your Twitter Handle
By Emma Carey
How To Use The Like To Know It App To Buy Influencers’ Faves
By Emma Carey
Get Even More From Bustle — Sign Up For The Newsletter