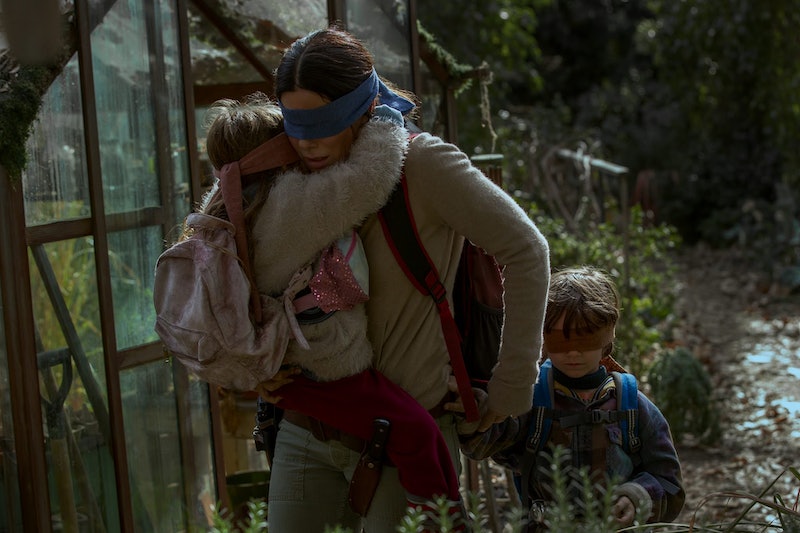 Netflix has had a huge year, at least by social media standards. Their original content has dominated conversations; from Twitter to Tumblr to Instagram, fans (and even haters) of shows and movies like 13 Reasons Why, and To All The Boys I've Loved Before are constantly sharing their thoughts on Netflix's content. And Bird Box, Netflix's most recent horror film, is no exception. In fact, these hilarious 21 Bird Box tweets and memes might just be some of the best Netflix-inspired content yet.

While Bird Box is a thriller/horror movie, and serious throughout, the memes that have been made about it are quite the opposite. The film — which stars Sandra Bullock, Trevante Rhodes, John Malkovich, and Sarah Paulson — focuses on an end-of-the-world scenario where creatures come and terrorize humans. These mysterious Bird Box monsters have the power to make people kill themselves with just one glance. And they seem to be everywhere you look. The only solution: don't look, which means that to survive outside, they must be blindfolded at all times.

Again, it's not a funny plot at all, and with all the graphic deaths and the general morbid nature of the film, it shouldn't warrant hilarity. But alas, where there may not appear to be jokes, Twitter finds them. And so we have the 21 funniest tweets and memes about Bird Box. Spoilers ahead!

First off, can we all agree that Sarah Paulson was not in Bird Box enough? How are you going to kill her off when she's survived longer in nearly every season of American Horror Story she's been in? Regardless, this GIF is a super accurate representation of Paulson's character's untimely demise.

This shot of Bullock in her blindfold has inspired countless jokes on the internet, including this brilliant take, referencing those old Febreze commercials where people were "kidnapped" and asked to guess where they were.

Even a fresh Pop-Tart doesn't taste like the fruit it's flavored for, so it's funny when Malorie told the kids it's what strawberry tastes like. How Malorie? How.

Get your head of the gutter! Not after a quick chuckle, though.

5. About those speed bumps

On the way to the grocery store, everyone in the car knew they were driving over bodies. But sweet Tom kept telling them they were just speed bumps. Many, many crunchy speed bumps.

6. When monsters are also your escorts

While it wasn't this dramatic, Malorie rushing the kids here and there was tiring to watch.

OK, a class before 9 a.m. is scary in-and-of-itself, but the act of actually getting up in time is even worse. This image of Gary forcing Cheryl's eyes open is the perfect example of responsibility slapping you in the face.

9. When was Douglas ever wrong?

Even though he was a callous jerk at times, Douglas was hardly ever wrong. Especially when he warned the survivors against letting Gary in.

While brave (sort of), Girl really took the biggest risk by trying to find Malorie when she thought she was in trouble. Malorie pulled her back almost this quick.

This was basically everyone's reaction to those names. When you deep-dive into why Malorie didn't name her children beyond Girl and Boy, it's a tragic case of trying to protect herself form probably grief later. But, still, it's weird.

12. Again with the names

This video is always going to be good meme content, but it's even better when you imagine Malorie saying something like this to Tom.

Malorie totally had a favorite kid, and never was that preference more clear than when she almost asked Girl to open her eyes outside.

Finally, when salvation was in their grasp, Malorie gave her kids the best gifts; naming them after their heroes.

Girl was definitely one of the best characters, but her choices were... questionable.

When Malorie finally decided that no one would be asked to potentially sacrifice themselves on their perilous journey, the relief we felt was real.

While the reason for the title wasn't explicitly mentioned in the trailer, it all makes sense now.

All Olympia wanted was for her daughter to be named after a Disney Princess, but Malorie didn't even follow through!

This all-purpose Kardashian driving meme is amazing, and perfectly depicts when Malorie and the kids nearly died on the river when they were oh-so-close to salvation.

Malorie rowed that boat by herself for two straight days. No doubt it was a great workout.

Even though Bird Box was full of twists, heartbreak, and anxiety-inducing scenes, it is currently being talked about non-stop on Twitter. These memes are just a tip of the iceberg, and definitely won't be the last you'll see. Even if you're still not looking outside. For... precaution.

More like this
The 'Love, Lizzo' Harry Styles Scene Is Just 1 Moment That Made Fans Feel Seen
By Brad Witter
How To Stream 'White Noise' On Netflix
By Grace Wehniainen
You’ll Be Able To Stream Bullet Train Before The Holidays
By Arya Roshanian and Radhika Menon
How To Stream Knives Out 2: When Will Glass Onion Be On Netflix?
By Radhika Menon
Get Even More From Bustle — Sign Up For The Newsletter