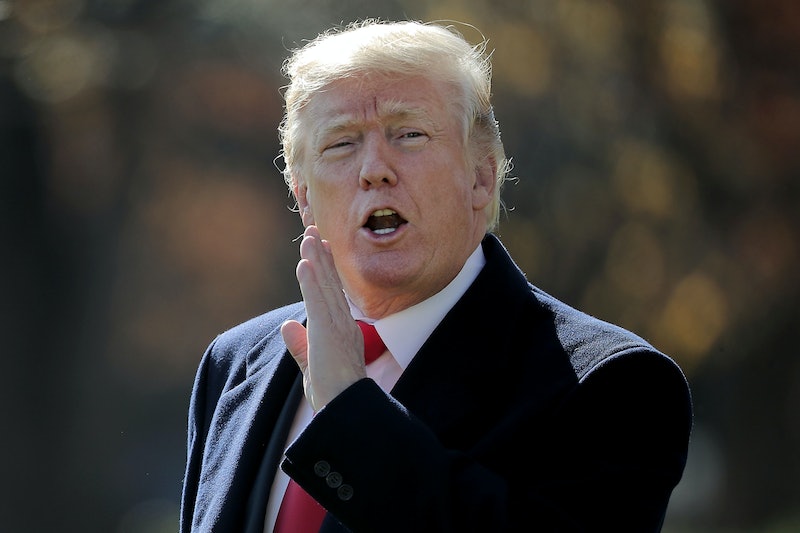 When Donald Trump was sworn in as president one year ago, some speculated that he might conduct himself in a more sober, professional manner as commander-in-chief than he did as a presidential candidate. During the campaign, Trump often used nicknames to attack his political foes — but surely, that behavior would stop once he became the leader of the free world. Right?

Nope. If anything, Trump has ramped up his use of schoolyard insults since assuming the presidency. He's trotted out some old favorites from the campaign, but he's also coined many, many new nicknames for his enemies during his one year in office. Some, he's only used once; others, he's repeated many, many times. The president has targeted Democrats, Republicans, journalists, world leaders and, in at least one case, a former member of his own administration. He often recycles nicknames  — "little," "crazy," and "sloppy" are three of his favorite prefixes — and in some cases, has applied several different nicknames to the same person.

One thing's for certain: If his first year is any indicator, Trump won't be giving up the nickname game any time soon. On the one year anniversary of Trump's inauguration, here's a comprehensive list of the nicknames he's used during his short but successful political career.

One of the first nicknames Trump gave was to his GOP primary opponent Sen. Ted Cruz. Trump himself doesn't exactly have a stellar truth-telling record, however, and many have said this is one of indication of the pot calling the kettle black.

Trump didn't use this nickname for former former Florida Gov. Jeb Bush all that often, but as one of the first notable Trump nicknames, it blazed the trail for many more to come. Some say the "Low Energy Jeb" nickname was partly responsible for Bush's unsuccessful presidential campaign.

"Sleepy Eyes Chuck" sounds like a blues guitarist from the 1950s, but in fact, it's Trump's nickname for NBC host Chuck Todd (who, it should be noted, doesn't have terribly sleepy-looking eyes).

Dumb As A Rock Mika

Trump initially referred to Morning Joe co-host Mika Brzezinski as "low I.Q. Crazy Mika" before going with "dumb as a rock Mika." His tweets attacking her appearance in July 2017 sparked a huge backlash.

Sen. Dianne Feinstein does indeed have a tough primary — and by singling out the California senator for criticism, Trump might just help her win it.

Trump continued using this nickname for his 2016 election opponent, Hillary Clinton, long after the election ended.

Many people have said that Trump's nickname for Sen. Elizabeth Warren is racist. In one of the more shocking White House controversies, the president also referred to Warren as "Pocahontas" during an event honoring Native Americans.

Trump, who's also referred to Sanders as a "maniac," nevertheless made an aggressive effort to court Sanders voters in the general election.

Trump's nickname for Sen. Marco Rubio may have been cruel, but some might argue that Rubio brought it on himself by posing for this photo.

Recently, Trump fell out of favor with his former campaign manager and top advisor Steve Bannon after Bannon publicly criticized members of his administration in the explosive Fire and Fury book. Trump responded in kind, and began referring to Bannon as "Sloppy Steve."

Trump's fraught relationship with Megyn Kelly is well-documented, and "Crazy Megyn" is nowhere close to the most offensive thing he's said about her.

Trump presumably called Rep. Frederica Wilson "wacky" thanks to her signature cowboy hat, which she often wears in public appearances, amid a row over fallen troops in Niger.

The president initially referred to North Korean leader Kim Jong-un as "Rocket Man." In response, Kim called Trump a "dotard," an esoteric word for an old, senile person. Trump, not wanting to be outdone, repeated his original nickname for Kim, but added "Little" to it. The escalating war of words between both men have sparked concern over their ability to control nuclear weapons.

Trump added a "y" to Arizona Sen. Jeff Flake's name, presumably because he finds him flakey.

Senate Minority Leader Chuck Schumer teared up while discussing Trump's immigration policies, which led Trump to make fun of him for crying.

Trump fired James Comey from the FBI in May 2017, and since then, he's occasionally tweeted insults at the agency's former director.

Trump called Sen. Dick Durbin "Dicky" after Durbin told reporters that Trump, in a meeting with lawmakers, had referred to Haiti, El Salvador, and African nations as "sh*thole countries."

While insulting GOP Sen. Bob Corker, Trump again came up with nickname premised on diminished stature. This time, he shook it up this time by spelling it "liddle."

Perhaps the least well-known of Trump's nicknames was the one he applied to Ohio Gov. John Kasich during the Republican presidential primary. After Kasich won only a single state's primary — his own — and lost 38, Trump called him "1 for 38 Kasich." But is it really a nickname if it has more syllables than the original?

That's a whole lot of nicknames, especially for the president of the United States. And it's only been one year.