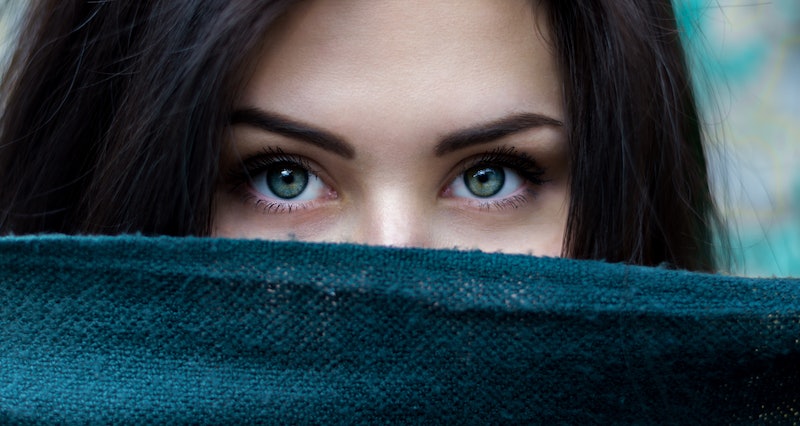 In a patriarchal society, being anything other than a straight, cisgender, white man automatically puts you at a disadvantage. Often, women are expected to apologize for things men never have to worry about — up to and including our very existence. We're expected to be likable but not too flirtatious, confident but not aggressive, and never less than 100 percent put together. Virtually every time a woman goes out in public without makeup, for example, she's hit with a barrage of concern over her appearance, as if visible dark circles under her eyes are a sign she's on the brink of death. At the same time, women who wear what's seen as "too much" makeup are criticized for being vain. It's a difficult tightrope to walk, but it's one women are expected to manage every day.

You've probably noticed by now that women say "sorry" far more often than men — and if you haven't yet, you will now. (Fair warning: Once you start paying attention to how often women apologize, it's hard to stop.) A 2010 study looking at gender differences in apologies spoke volumes about the way women are conditioned to perceive their very existence as intrusive. According to the results, men are just as likely as women to apologize for perceived wrongdoing — the difference is that they're less likely to think they've done anything wrong in the first place. If that doesn't describe the patriarchy in a nutshell, I don't know what will.

There are plenty of little ways this manifests in everyday life. Although it's by no means an exhaustive list, keep an eye out for the 22 listed below.

1. We're not supposed to talk too much, which is usually defined as "talking more than a man."

2. A woman interrupting a man is frowned upon, even though men do it to women all the time. Exhibit A: Any of the presidential debates.

3. We're encouraged to sit around and look pretty rather than asking questions.

4. If you don't shave your legs, someone will comment on it unfavorably.

5. Women are more likely to be undertreated for pain, and in my experience, that usually means they lead with "sorry" in the doctor's office.

6. Masculinity is associated with leadership, but...

8. Women aren't supposed to wear too much makeup. (Who cares if I'm wearing enough eyeliner to make me look like a panda at 7 a.m.?)

9. On the flip side, we can't go entirely without makeup. (No, I'm not dying because I failed to put on concealer this morning. This is just the way a normal human being looks when they wake up 15 minutes late.)

10. Rape culture teaches us that a survivor's behavior can be blamed for assault. Spoiler alert: That's not how it works.

12. Men can take up as much physical space as they want, and women are expected to accommodate them.

14. Women have to downplay and apologize for their emotions for fear of being called "crazy."

15. Feminine interests are ridiculed. For reference, look at the press coverage of fans of One Direction.

16. In the summer, women are called out if they don't shave every. Damn. Inch. Of their body.

17. The clitoris is still largely unexplored territory, probably because...

18. ...Female orgasms are seen as an afterthought in sex, and sexually aggressive women are mocked or fetishized.

19. We're taught to use minimizing language when talking about ourselves.

20. If a woman's body doesn't fit the perfect beauty ideal, she's criticized for not being "healthy."

21. Men's interests and careers always come before a woman's.

22. Ironically, we're told we apologize too much, but when we stop apologizing, we're seen as too aggressive. Go figure.

So much of the time, it's a lose-lose situation. But honestly, that's why it's so important to call out society's weird expectations when we see them — and to do so unapologetically. None of these are things we need to apologize for, and it's high time our culture realized it.