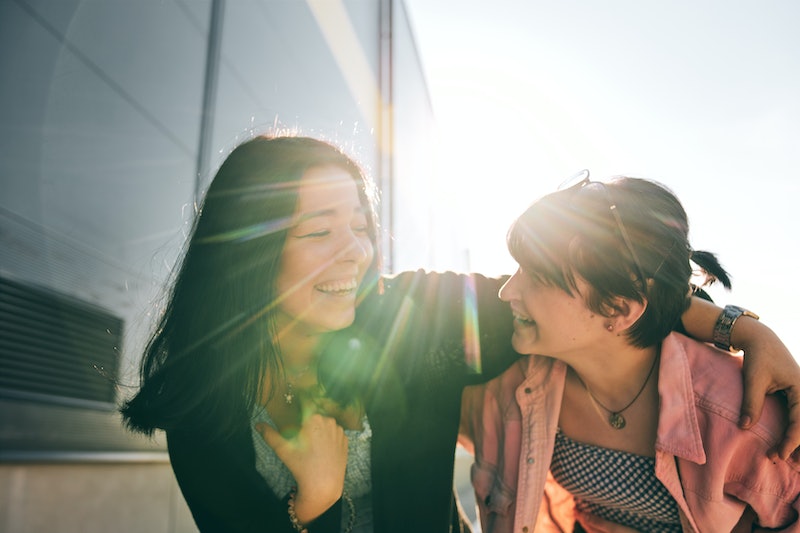 Occasionally, something will become trendy to make fun of. An internet meme or TV episode will pop up, and the next thing you know, everyone in your office is making jokes about it. While this can be fun, we need to be skeptical of the "feminine" things we mock and ask ourselves why we mock them. Because I've noticed a troubling pattern: The stuff we like to make fun of often has to do with women.

This is part of an overall pattern in our culture, even sometimes among feminists, of devaluing the things that are culturally considered "feminine." Women often feel they have to prioritize work over family, prefer the sciences over the humanities, and do other things considered "masculine" in order to be taken seriously. This is a problem. While we shouldn't be expecting women to do "feminine" things, we should allow people of all genders to do "feminine" or "masculine" things if they want to. Valuing the masculine over the feminine polices women and furthers limitations already imposed on men.

Here are a few things I'm sick of hearing mocked, because if you really examine it, you notice a correlation between what we mock and what we considered "feminine."

The "basic bitch" became a meme after the release of this CollegeHumor video, where a therapist diagnoses a woman as a "basic bitch" for getting scented candles, using special frames for pictures of her family, wearing sweatpants that say "sexy," taking Zumba, and doing pretty much everything else stereotypical of a millennial woman. I'll admit I laughed when I saw it, but there's also a lot wrong with it. By dubbing this the "basic bitch," we're dividing women into categories as if they were products. We're also encouraging stereotypes by implying that this is the standard variety of woman, when in reality there is no "basic" woman or man. Lastly, and perhaps most problematically, the butt of the joke here is femininity. Because what on Earth is wrong or frivolous about doing yoga or drinking lattes? If men primarily did these things, yoga would be considered an art form and lattes would be considered a culinary masterpiece (which they kind of are, IMHO).

The Kardashians are the family America loves to mock, but the joke's on us, because they're making millions off our mockery. Kim Kardashian may not be Gloria Steinem, but overall, the sisters are not bad role models. They're effective businesswomen, they're funny, they've expressed socially progressive views, and they actually give some great advice. Yet often, the reception of them has been, "Sure, they've built an empire, but LOL, they care about looks." Would we be mocking them so much if they were the Kardashian brothers?

Lately, it's become popular for feminists to say that women should speak more loudly, apologize less, use less uptalk, use less vocal fry, and essentially stop speaking in ways that are "feminine." But often, "feminine" speech only comes off vapid or passive because we associate it with women. There are a lot of interesting studies out there showing that women use valley girl speak and other stereotypically feminine language in much smarter ways than we give them credit for. One study presented at the Acoustical Society of America meeting found, for example, that over half of women's uses of uptalk were for the purpose of signaling that they weren't done talking (not surprising given how often women are interrupted).

Feeling insecure about our bodies is one thing, and that obviously shouldn't be celebrated. But women shouldn't be criticized for it, either — society should be. It's completely reasonable to care about your looks in a world that defines you by them. Then, there are the women who care about looks because they have fun with it and recognize the influence you can exert on others through a carefully crafted image. Perfecting your clothes, makeup, and hair can be an art form and a crafty business decision. Let's not view it for less than it is.

Emotions make a lot of people uncomfortable, so we tend to make fun of people for getting excited, crying at sappy movies, or hugging their friends a lot — and conveniently, this nicely fits into another stereotype: the girl who just can't keep it together. But as we mock women for shouting "I love you" to their friends and posting photos of themselves with their families on Instagram, I think there's often some part of us that wishes we had that. If we didn't view sentimentality as "feminine," we would probably see it as a wonderful and brave thing. It's a shame we're missing out on this and all the other "feminine" things we mock when we could be enjoying them.

More like this
4 Things To Do & 3 Things To Avoid This Gemini Season
By Brittany Beringer
How Gemini Season 2022 Will Affect Each Zodiac Sign
By Brittany Beringer
Here's Your Daily Horoscope For May 19, 2022
By Mecca Woods
Rihanna & A$AP Rocky’s Astrological Compatibility Proves They'll Be Amazing Parents
By Nina Kahn
Get Even More From Bustle — Sign Up For The Newsletter