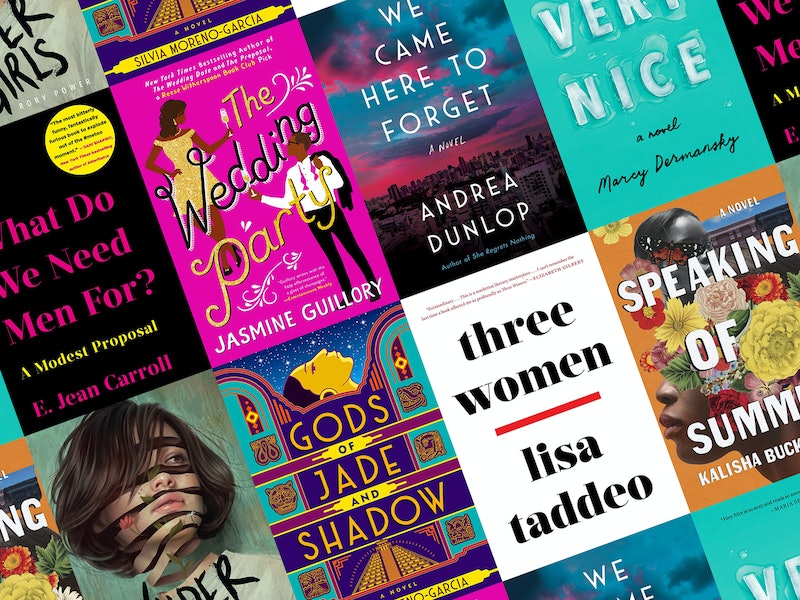 You blinked, and an entire month of summer passed before your eyes. Memorial Day is a flickering memory, Labor Day is closer than you want to admit, and it's time to buckle down and get to answering the important questions, like: How many times can I reasonably expect to make it to the beach before September? And what should I read when I get there? Luckily, I've got the answer to the second question in the form of this list of the 27 best books coming out in July.

If you self-describe as a "fan of murder podcasts," there's definitely a few books on the list below for you, including Riley Sager's new novel Lock Every Door, about a glitzy New York City apartment building with dark secrets. If you're more in the mood for politically and socially urgent nonfiction, you should pick up E. Jean Carroll's What Do We Need Men For?, an excerpt from which contained accusations that President Donald Trump sexually assaulted the writer. If you want to read a searing exploration of racism in America, you won't want to miss Pulitzer Prize and National Book Award winner Colson Whitehead's new novel The Nickel Boys. Or, if you want something that will transport you from this world (I don't blame you), try Silvia Moreno-Garcia's Gods of Jade and Shadow, a fantasy rooted in Mexican mythology and set in the Jazz Age.

Those are just three of the 27 books out this month that you should definitely have on your radar. See them all:

What Do We Need Men For?: A Modest Proposal by E. Jean Carroll (July 2)

Last month, famed advice columnist and author E. Jean Carroll alleged that President Donald Trump sexually assaulted her in the dressing room of a New York City department store. The accusations — posted as an excerpt to New York Magazine — were originally made in this book, What Do We Need Men For?, a powerful, wry accounting of the "hideous men" the author has encountered in her life.

In the latest novel from beloved thriller writer Riley Sager, a luxurious New York City building is haunted by dark secrets, and Jules, an apartment sitter, makes it her mission to discover them all when a fellow sitter goes missing under mysterious circumstances.

We Came Here to Forget by Andrea Dunlop (July 2)

In alternating chapters, Andrea Dunlop explores two sides of the same woman: Katie, who is on the road to Olympic success when a family secret becomes impossible to ignore; and Liz, the woman she becomes when she sets aside her skiing career and moves to Buenos Aires. You can read an excerpt of You Can Here to Forget on Bustle.

This is buzzy, breezy summer read you've been craving all summer. In it, a creative writing professor gets swept up by the whims and wiles of two equally seductive women: his student — and her mother.

Symptoms of a Heartbreak by Sona Charaipotra (July 2)

Saira is 16 years old. She is also a doctor. The youngest doctor in the United States, in fact. It's not all fun and games, especially because she works at the same hospital as her mother. And especially when she strikes up a friendship with one of her patients, a teenage boy with cancer.

Kerrie's life is an absolute mess. Jordana's life is perfect. They couldn't be more different, and yet they are forever linked by the events of one night. And now, Kerrie wants revenge for what happened all those years ago.

Tell Me Who We Were by Kate McQuade (July 2)

In this short story collection, Kate McQuade tells the stories of six young women who were all transformed by the same pivotal moment: The death of the handsome, beloved Mr. Arcilla, the teacher of romance languages at their all-girls boarding school.

When their boss is promoted to CEO, four women decide enough is enough. They all know — personally — that he's not a good guy, and they decide it's finally time for their "whisper network" to get loud so they can get justice.

Jo Nesbø's iconic detective, Harry Hole, is back and not in a good spot: The love of his life has dumped him, and a serial rapist and murderer he arrested, Svein Finne, is free after years behind bar. Hole's life takes a darker turn when he wakes up one morning after a blackout with blood on his hands. And it's not his own.

It's been 18 months since a mysterious and brutal illness wiped out most of the student and teacher population of Raxter School for Girls, and three friends are still quarantined in the campus, too frightened to venture into the forest where the sickness has made everything dangerous. But when one of the girls goes missing, the other two will finally have to figure out what happened and what they're up against.

The Need by Helen Phillips (July 9)

A speculative thriller guaranteed to throw you for a serious existential loop, The Need is the story of one mother who is facing down her worst nightmare: an intruder who knows all-too-much about her and her family.

Three couples rented a beach house for a weekend. After the very first night, one of the women turned up dead. Now Detective Gabby Watkins has to figure out what happened — and how many people in the house are hiding secrets from her.

Like Fight Club but with food, Supper Club is the story of two women who take charge of their life through the creation of a collective that celebrates the power of feasting. Before long, the group morphs into something that's less about food and more about rebellion and power and all the desires women have suppressed for so, so long.

The Lightest Object in the Universe by Kimi Eisele (July 9)

It's basically the end of the world when The Lightest Object in the Universe begins: the global economy has crashed, and the electrical grid is down. And so Carson, desperate to be reunited with his love, Beatrix, embarks on a dangerous trek from East to West, while Beatrix begins to build a cooperative community that could be the beginning of a new world order.

In this nuanced, raw exploration of female desire, Lisa Taddeo tracks the stories of three real women and their sex lives. All three women are unsatisfied, anxious, confused, angry, hurt. And all three women are on journeys to discover what they actually want.

The Nickel Boys, the latest novel from Pulitzer Prize and National Book Award winner Colson Whitehead, is rooted in gruesome real events from the United States's recent history. It's the 1960s, and Elwood has just arrived at the Nickel Academy, a juvenile reformatory that claims to be a place for delinquent young men to become law-abiding citizens. Instead, the Nickel Academy is a horrifying den of torture where boys are beaten, sexually abused, starved, and murdered.

The first of two Jasmine Guillory novels out in 2019 (the second is inspired by Megan Markle's mom!), The Wedding Party is an enemies-turned-lovers romance set against the backdrop of a wedding, and yes, it's the perfect summer book. Read an excerpt of The Wedding Party on Bustle.

Lady in the Lake by Laura Lippman (July 23)

It's Baltimore in 1960, and housewife-turned-reporter Maddie Schwartz thinks the story of the murder of Cleo Sherwood will finally earn her some respect at the newspaper where she works. She is determined to figure out what happened, and she has an uncommon advantage: She can see Cleo's ghost.

Gods of Jade and Shadow by Silvia Moreno-Garcia (July 23)

When a Mexican girl accidentally awakens a Mayan god of death, she becomes a co-conspirator in his drastic plan to reclaim the throne from his traitorous twin brother. You can read an excerpt of Gods of Jade and Shadow on Bustle.

A Stranger on the Beach by Michelle Campbell (July 23)

Caroline wanted her beach house to be a lavish symbol of all her success. Instead, it's a reminder of everything that's gone wrong: her marriage, her family, her finances. When she turns to a stranger, Aiden, for comfort, she doesn't anticipate that their affair will turn into something far more dangerous — and deadly.

My Friend Anna: The True Story of a Fake Heiress by Rachel DeLoache Williams (July 23)

By now, you've probably read — or at least read about — the story in Vanity Fair about Anna Sorokin, the New York City grifter better known by her alias "Anna Delvey." In My Friend Anna, Rachel DeLoache Williams expands on her VF article to tell the gritty, glittery story of the woman who defined the Summer of Scam.

Gravity is the Thing by Jaclyn Moriarty (July 23)

Twenty years ago, two things happened to Abi: Her brother, Robert, went missing, and she began mysteriously receiving chapters from a self-help manual, the Guidebook, in the mail. Now, she's been invited for an all-expenses paid retreat to learn about the Guidebook — and she wonders if it's finally the chance she needs to let go of the past.

This book begins with a baffling mystery, the kind of childhood riddles: Autumn's twin sister, Summer, walks to the roof of their brownstone and is never seen or heard from again. No body is found. No footsteps. No clues. Could her disappearance, Autumn wonders, be linked to a string of murders of local women?

Cindy is 14-years-old and lives in rural Pennsylvania with no one but her older brothers and dogs for company. When a girl from an affluent home goes missing, Cindy spots an opportunity to slip into that life and change her world entirely.

Someone We Know by Shari Lapena (July 30)

The tension has never been thicker in this New York town. First, it was discovered that a teenage boy had been sneaking into homes and onto computers and learning people's deepest, darkest secrets. Then, a woman was murdered. Suddenly, everyone in town is a suspect and everyone is asking themselves the same questions: Who has a secret? And who knows my secrets?

Never Have I Ever by Joshilyn Jackson (July 30)

Amy Whey is a perfect woman with a perfect life: Perfect kids, perfect house, perfect husband, perfect hobbies, perfect friends. Heck, she even has the perfect book club. But her perfect world comes crashing down when a mysterious woman named Angelica Roux joins her book club and makes it clear that she knows the truth about who Amy really is. How far with Angelica Roux go to destroy Amy? And how far will Amy go to protect her perfect life?

You've probably been to an Escape Room, but have you ever considered what would happen if it wasn't a game? In The Escape Room, four Wall Street traders step into an elevator for a team-building exercise and end up in a sinister game with just one rule: Get out alive.