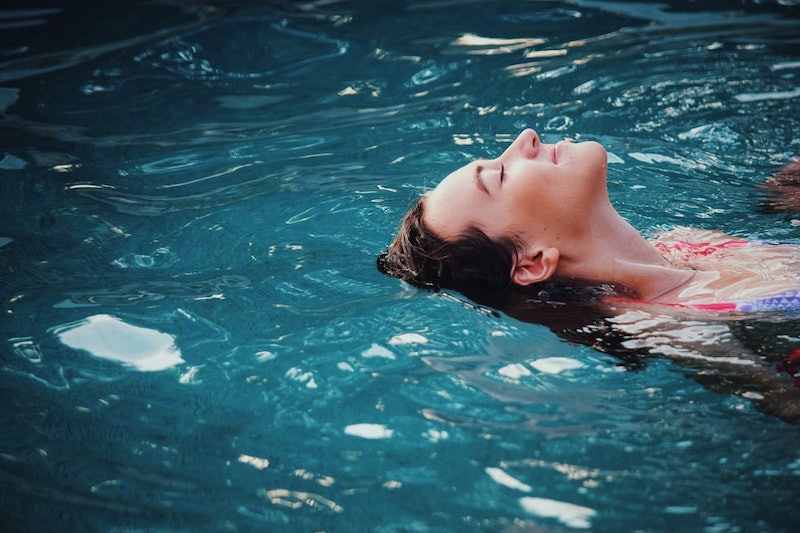 These days, it feels like we're all trying to balance our inner chi. Aside from being trendy, in today's over-connected world it's also necessary. As a result, there are a number of weird things I have tried to achieve zen, aka a total state of focus that incorporates a total togetherness of body and mind — including floating in a sensory deprivation tank, walking barefoot over hot coals, and sweating it out in an urban sweat lodge.

Ancient practices are beginning to gain momentum in the modern world as we search for more and more ways to calm the hell down, find inspiration, and harness our creative energy. I went searching for ways to clear my head after a particularly stressful stretch of years that included getting married (and then divorced), pursuing my MFA, moving to two different states within six months, my brother spiraling into drug addiction, and the death of my father.

During this time I likened my head as a snow globe that had been shaken up over and over again and wouldn't settle down. My thoughts were scattered, and I had lost my ability to focus on anything for an extended period of time.

I will try anything once, and here are a few of the things I sought out in an attempt to get my groove back.

Floating In A Sensory Deprivation Tank

Floating is the new yoga. John Lennon and Michael Jackson were both devotées of floating in sensory deprivation tanks, and now these float tanks are popping up all over the country. Many floaters even have their own tanks at home. When my friend called me and asked if I wanted to try this I have to admit I was skeptical.

"You mean I have to float naked in the dark in a tank like a fish?" I asked. It sounded a little creepy, but since she had found a place in Pasadena, Calif. called Just Float that offered first-time floaters half off the regular price, and she promised to buy me lunch first, I agreed to try it.

The benefits of floating are well documented anecdotally in the wellness community, and Time magazine reports that neuropsychologist Justin Feinstein believes floating could be a shortcut for many people to reach a meditative state.

“Floating has given me hope that a whole chunk of our population that normally would never be able to meditate could now achieve those sorts of deep meditative states,” Feinstein, who dedicated his career to uncovering the benefits of floating, told Time.

When we arrived at the floating center we were given a waver to sign as well as an iPad to watch an introductory video about what we could expect from our first float. Some float tanks are small and claustrophobic, like a coffin. This was not the case at Just Float, which felt like a nice spa. We were led down a long hallway that had float rooms on each side. Inside each room was a small changing area, a shower to rinse off before and after your float, and a door to the float tank, which to me looked like an enclosed hot tub.

Even if you can't swim, or even float, don't worry. The water contains more than 800 pounds of epsom salt, which buoys your body to the surface where you easily float on top of the water like a duck. After showering, I climbed into my tank, laid down in the water, and turned off the light, which is supposed to recreate the experience you had in your mother's womb. My float was scheduled for an hour, and during this time I was instructed to lie in the water, and try to shut off my brain. Remember what I said about the snow globe? Yeah, I wasn't able stop my racing thoughts — but if I became a repeat floater maybe that would change.

To try to steady my mind I began reciting lyrics from Stevie Nicks songs over and over again in my head. Also, lying in warm water for an hour really makes you have to pee! Between my racing mind and deciding whether I should get out of the tank to pee, it wasn't totally relaxing mentally, but I did feel somewhat calmer after my hour was up, and my body felt great. If you want to try it for yourself, check out this directory to float tanks in the U.S. area.

Detoxing At An Urban Sweat Lodge

Sweat lodges, rooted in Native American traditions, are typically huts that are heated up for the purpose of purification ceremonies. According to Medical Daily, sweating helps purge the body of toxins, boosts endorphins, improves kidney health, strengthens your immune system, and promotes clear skin. If you live in the city, chances are you're not going to have many opportunities to experience a traditional sweat lodge. That's where the urban sweat lodge comes in.

I had walked past Shape House in Los Angeles, Calif. many times on my way to my neighborhood coffee shop before deciding to stop in. Getting your sweat on at an urban sweat lodge is pretty different from a traditional sweat lodge experience. You'll want to be dressed in sweats or workout clothes, that cover your arms and legs completely. Next, you'll be wrapped in an infrared blanket to induce sweating that makes you look like you're wearing a tinfoil space suit. Then you'll sit in an infrared bed, which looks like a cozy armchair, infused with ceramic plates.

During your sweat you get to watch whatever you want on Netflix, or Hulu, which is a bonus. Many people swear by sweating, including LL Cool J, and while I did feel great afterward, the whole experience of sitting in my sopping wet sweaty clothes for an hour kind of grossed me out. Serious sweaters can purchase their own sweat beds (Selena Gomez has one). Some of the reported benefits include weight loss, but doctors caution that sweat beds are no substitute for proper nutrition and exercise. If you want to try it, there is not a national directory for this, but you can google "sweat bed" and the name of your city to find one near you.

OK, let me preface this one by saying: Don't try this at home. I have "walked on fire" twice with a meditation group led by a professional healer. While the leader of our group explained to us that it was the immense effort he put into cultivating respect and a balanced relationship with the fire, and the wood, as well as our collective energy holding space for each other, that prevented us from getting burned, scientists have a different theory.

"There're three ways heat can get transmitted: conduction, convection, and radiation," David Willey, a physics instructor and an expert on the science of fire walking at the University of Pittsburgh, told National Geographic.

Conduction is the main way heat is transmitted to a person's feet during a fire walk, the article explained. In fire walking, a person's feet, which Willey claimed are also poor conductors, connect with ash-covered coals, and since the time of contact between feet and coals is minimal — it's too quick for the coals to burn your feet.

That being said, I do know of people who have walked on fire without an experienced leader, and they did indeed burn their feet, so the collective energy theory is more comforting to me. Our leader said that in order for the fire walk to be successful we all had to believe that each of us who wanted to could walk across the hot coals without being harmed.

Each New Year's this particular teacher has a fire walking retreat in New Mexico. We spend a few days meditating, connecting with nature, and shedding the burdens of the past year. The weekend culminates with a fire walk in which we spend the day preparing the fire with wood from the leader's property. Below we are preparing the fire.

Shortly before the walk we let the fire die down, and then shovel the hot coals over the Earth to create a path, sort of like a red carpet, made from fire. People line up on each side of the path and look toward the sky while the person whose turn it is to walk stands at the beginning of the path of fire. That person selects a word, like "love," or "inspiration," and as they walk (or run) across the 10-foot path of hot coals, the rest of us hold space by looking toward the sky and chanting: "My body will do whatever it must to let me walk on fire." While we're doing that, the walker repeats their mantra (or word) and makes their way across the path.

I have done this twice, and I saw with my own eyes the heat rising from the coals. I would be lying if I said I wasn't scared of getting burned both times. However, I made it across unscathed, and this experience was helpful in boosting my confidence and reaffirming that I am indeed capable of whatever I put my mind to. Below is a photo of the coals I walked over. They are red hot.

While all of these experiences were valuable, I haven't become a devotée of either floating or sweating, but I am a repeat fire walker. In the end time, patience, meditation, and a lot of introspective soul searching helped me get back on track. All three of these things are tools I used along the way, and anything that helps propel you forward, even a little bit, is never a mistake.

More like this
7 Symbolic Meanings Of Autumn — From Letting Go To Self Preservation
By Kirsten Nunez
The Historical Meaning Behind Why Autumn Is Called ‘Fall’
By Chelsey Grasso
Craving The Beach? Here's Your Guide To A Solo Vacation In Turks & Caicos
By Alexis Morillo
7 Ways To Help People Impacted By Hurricane Fiona In Puerto Rico
By Carolyn Steber
Get Even More From Bustle — Sign Up For The Newsletter