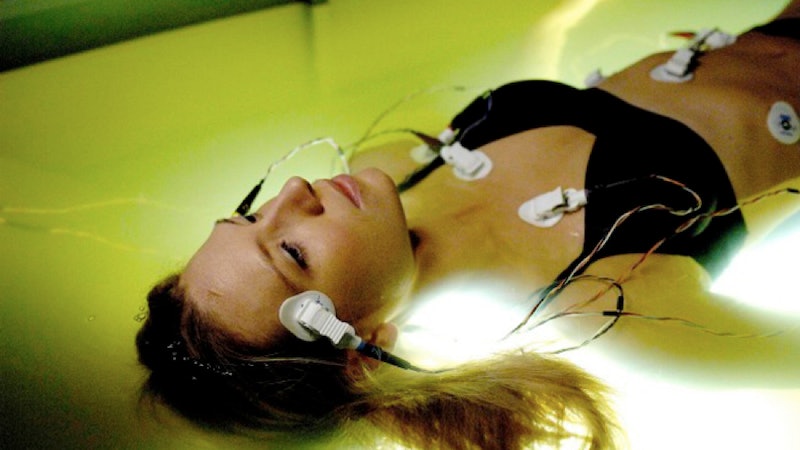 Until a few weeks ago, everything I knew about sensory deprivation tanks, I had learned from TV. Basically, I knew that users got in a dark, warm, soundproof, water-filled tub, floated around in there for a long time, and then when they got out, they were either very relaxed or had developed eerie psychic powers (thanks, Fringe !). As a person who is terrified of enclosed spaces — and who is very happy with my current level of eerie psychic powers, thanks — "floating" in a tank, as sensory deprivation tank enthusiasts call it, had never entered my mind.

But I've spent the past few years wrestling with some truly fierce chronic insomnia, and it's opened my mind to a lot of things that I would have dismissed in the past. In the name of getting a decent night's sleep, I've been hypnotized, taken fistfuls of prescription pills, and attempted "sleep hygiene" — that thing where you're not allowed to do anything in your bed except sleep. Which led to a few weird weeks of watching TV while standing up, but no improved sleep. Every remedy I tried only yielded spotty, inconsistent results.

After discussing these problems at length with a particularly crunchy friend, she asked, "Well, how are you relaxing?" I was reluctant to tell her the truth: The only things that I do to relax are jog and read books about murder. "There's your problem right there," she told me. "You can't only relax through super-aggressive stuff that burns off anger. You need to soothe yourself, too."

So when I heard that Lift, a sensory deprivation tank center, was opening near my house, I booked an appointment.

How The Tanks Are Supposed To Work:

Proponents of sensory deprivation tank therapy — rechristened "Restricted Environmental Stimulation Therapy" in the '70s — claim that floating offers relief from insomnia, stress, and anxiety, and can even improve creativity and concentration. Many advocates describe it as a kind of "meditation plus" — a shortcut to achieving relaxing mental blankness. It's been extolled as the basic building block of health by everyone from writers on Oprah's website to your personal trainer.

While the first sensory deprivation tanks, developed in 1954 by scientist John C. Lilly, involved floating upright in a dark pool while wearing a creepy rubber "black out mask" that made you look like a villain on American Horror Story, today's tanks look more like friendly, glowing eggs. You lie down in water filled with 1,000 pounds of Epsom salt, which means that anyone can effortlessly float in it — even people who faked mono to get out of high school swim tests. The water is warmed to skin temperature, and you float naked, which gives the whole thing a back-to-the-womb vibe.

Lilly invented the tanks in order to plumb the depths of human consciousness and discover what the mind would create in the absence of all stimulation (he also later got into LSD and communicating with dolphins, which I assume is a total coincidence). But the recent boom in sensory deprivation tank usage has been related to research which has posited them as a cure for myriad physical and mental health issues. One 2005 study found that consistent sensory deprivation tank usage "lowered blood pressure, reduced pain, anxiety, depression, stress and negative affectivity." The New England Patriots have a tank in their locker room. Today's sensory deprivation tank is more likely to be used to cope with chronic pain than it is to totally trip out (though sometimes, totally tripping out happens anyway).

I decided to try it for myself.

The room looked almost like an enormous bath tub, with about two feet of salt-filled water at the bottom, the ceiling dotted with tiny Christmas-tree-type lights, and a blue light glowing from the bottom of the tub.

The woman who guided me into my tub room explained that both the blue and Christmas-y lights could be turned off using a soft rubber switch on the wall, leaving you alone and wet in the dark. I doubted I'd turn off the lights, but hey, a few months ago, I wouldn't have signed up to float nude in a tub of salt water — who even knew what I was into anymore?

Other instructions: Wash up in the attached shower, smear some complimentary Vaseline on any cuts so that they don't get stung by the salt, and for the love of god, don't get any salt water in your eyes. I showered, smeared, and prepared to sit alone with my own thoughts for the first time in ages.

I gingerly stepped into the pool, sat down, and was immediately floating with my face just above the surface of the water and my body just below. The salt water stung, but not in the places I thought it might; my vagina was fine, but my butthole felt like it was on fire for the first few minutes. The room was moist and steamy, and the water was the exact temperature of the room, so that the parts of me that were submerged didn't feel very different from the parts of me that floated above the water. In fact, I had to look down more than once to see if my breasts were under the water or out of it (they were mostly under).

I also spent the first few minutes acclimating to the idea that I couldn't sink. This was at first confusing, then delightful. I'd always had trouble doing anything but sinking to the bottom in pools, but here, I was floating with ease, as if I was lying on a futon instead of a body of water. Getting used to the idea that I was not going to somehow drown in two feet of water, I began to relax my muscles, leaning my ears into the water, and gently bouncing off the walls of the tank, like a groovy New Age ping pong ball.

All day long, I take heroic measures in order to never be alone with my thoughts. I spend every waking moment listening to music and flicking through Twitter because I am horrified by the prospect of finding out what is actually inside this terrible curdled melon of a mind of mine. Without my usual electronic crutches in the tank, I braced myself for whatever it is that I've been repressing. And then this song popped into my mind:

For those of you not inclined to click random YouTube embeds, that's a song by erstwhile Lilith Faire stars 10,000 Maniacs which had been incredibly popular in 1992, when I was 10. Despite not having heard the song for about 20 years, I found that I still knew all the words.

On one hand, I was impressed by my recall — it made me feel like one of those people who get hit on the head and then can suddenly read Latin. But it wasn't the kind of deep thought I had imagined I'd have. Maybe I just am this shallow, I thought. That would be kind of a relief, right?

"I wonder why you love all this terrible music from your childhood so much?" I thought innocently. "Oh, because it's from before you started identifying as an irreparably emotionally damaged human being," I thought back to myself. Whoops. So these were the deep thoughts I had been running from.

A staff member asked if I was feeling relaxed. "Very relaxed!" I said, because it was way easier than saying " I am on my way home to do some very real and thorough crying that I've been putting off for the past 18 months."

I did some more naked ping-pong off the walls, with a little bit less enthusiasm this time. I thought, "You are worried that your insomnia will never end because you are worried that you are an emotionally ruined person who doesn't get to feel good, and now you don't even get to physically function like a normal human being any more."

All the thinking I had been suppressing for months, years, came flooding into my brain — fears that I would never feel at peace about my tormented relationship with my mother, that I wasn't "going through a rough patch," but rather was just an inherently miserable person. I couldn't tell if thinking these things while floating naked in a giant bathtub under Christmas lights made it better or worse.

I adjusted my head in the water, and flicked my hair back in, dribbling salt water directly into my eyeball. Whatever emotional pain I thought I was in absolutely paled in compared to the pain of salt in my eyes. I sat up, gasping and rubbing my eye (which probably just made things worse). I knew I only had a few minutes left in the pool, so I went back to bouncing off the walls until gentle New Age music came on to let me know that I was done.

After I showered and dressed, I spent a minute in the center's waiting room, where the piles of kaleidoscopes and pretty photo books displayed implied that most people were having more of a "long weekend in Amsterdam" experience in the tanks than a "is my soul inherently empty?" freak-out like I was. A staff member asked if I was feeling relaxed. "Very relaxed!" I said, because it was way easier than saying " I am on my way home to do some very real and thorough crying that I've been putting off for the past 18 months."

I actually didn't even make it all the way home; I started crying on the train platform. I thought about all the most acceptable reasons to cry on public transit — death of a loved one, romantic breakup — and wondered where "accidentally thought too much while in a nude hippie water room" fit into that.

So Is It Worth Trying?

A session in an isolation tank typically costs around $60-$70 per hour, which means that in terms of forms of relaxation, it's up there with "super fancy massages" as one of the pricier methods. Additionally, most floatation enthusiasts will tell you that you need multiple sessions before you truly start to see the benefits. So should you spend the money on this single event? Or would you be better off spending it on, say, six yoga classes or 60 $1 tacos or something?

Well, as my experience shows, floating is not a sure-shot shortcut to relaxation or lack of conscious thoughts. Yes, I had an interesting experience, and one that I do think ultimately benefited me. I'm glad that I finally stopped trying to avoid my thoughts, even if it took a nude underwater freakout do so.

But was my experience relaxing? Nope. I didn't sleep any better or feel any more at ease afterwards — in fact, I felt jittery for an entire day, and didn't sleep well at all that week until I got a thoroughly punishing jog in. I would say that a float is worth the money if you're really open to new experiences — say, if you really want to crack your head open and see what's inside, but you're too old and responsible to buy magic mushrooms from some guy named "Peace Frog" in a convenience store parking lot.

But if you're only interested in chilling out? You may want to think twice. There are a lot of things that can happen when you're stuck alone with your mind, and relaxation and weeping breakdowns are only two of them.