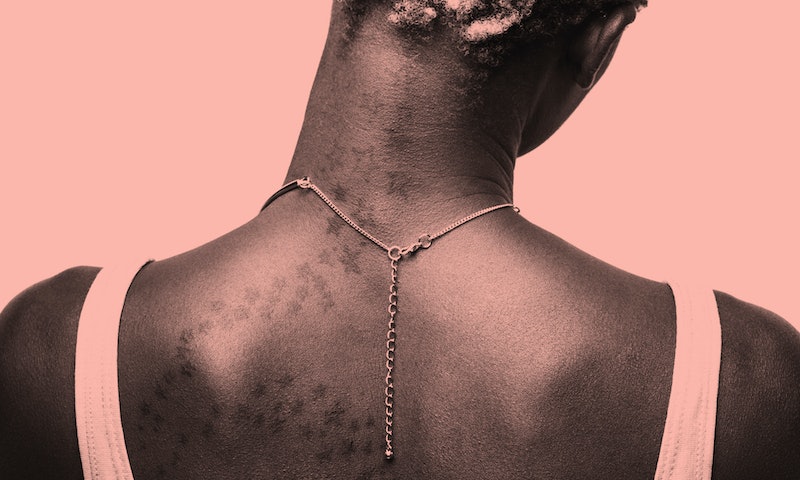 Breast cancer is a disease that can strike at any time, or any age. And while those who have been diagnosed are first and foremost focused on their health, it's also perfectly normal for them wonder how cancer treatment will change their bodies.

Having concerns about losing your hair to chemotherapy or being scared to say goodbye to your natural breasts prior to undergoing a mastectomy are all very legitimate fears. And for black people in particular, when it comes to their skin, these concerns can be even more pressing. This group not only tends to develop more prominent scars post-surgery, but they are also more prone to developing keloids and hypertrophic scarring following any trauma to the skin.

While going through the process of treatment, and even after that chapter has come to a close, some may not recognize the person they see in the mirror. But it's important to know that there's no shame in voicing these concerns. Initiatives like the Lipstick Angels — which provides free services like makeup applications, facials, and massages across Los Angeles, San Francisco, and New York City — understand the need to feel confident while undergoing treatment. Organizations like the Sisters Network is also a great nationwide support network for black women with breast cancer living in the U.S., while The Olive Branch of Hope can provide similar services for those based in Toronto, Canada.

Of course, anyone undergoing chemotherapy is likely going to lose their hair, but for black people — who already tend to have a much more complicated relationship with their natural locks than most other races — hair loss associated with cancer can be sometimes be even more devastating.

Breast cancer survivors Monique Bryan, Kelly DeVose, Leanne Pero, and Tiffany Edmondson were all forced to say goodbye to all their hair during treatment. And now they're sharing how it impacted their journeys, even after beating the disease.

"I was convinced I would beat the odds and not lose my hair. I remember the first chemo treatment, they tell you you'll probably lose it [about two weeks] after you've started chemo. After the first treatment, I was like 'Didn't lose my hair, so this is fine,' but it hadn't been 15 days yet.

On day 15, I literally started losing chunks of my hair.

I remember sitting and [my husband and I] were watching Netflix, and I put my hand in my hair and scratched my head — I barely touched it — and it came out with a chunk in my hand. I freaked out as I was looking at it, and I put it on the night table. My husband didn't notice, and I'm just sitting there crying in silence, and he looks over like 'Oh my God, what happened?' And I was like 'I'm losing my hair!'

It was very traumatizing. It literally feels like it's tearing out of your head. It's like this tingling — it's a horrible, horrible feeling.

I would just randomly cut chunks out, put my bonnet back on and go about my business. And then when my hairdresser came over, I had this feeling of embarrassment, because she's been taking care of my hair for six years. And we've done everything with my hair — dye it, and mohawk it, and went natural, and permed it — we've done so much to my hair. My hair was my crown. And I was like, 'She's going to come over here and have to shave this off and see me sick. I don't want anyone to see me sick.' But she came over and I invited my family to come over and we blasted the music, had some tunes and she shaved my head.

Once it was gone, I remember my brother looking at me and he was like 'You know what, sis, I was worried, I was worried for you. But you've got a nice shaped head.'

I really felt a lot of freedom. As black women we've always got to wear a shower cap. You know when you keep your head a little bit away from the water because it's going to ruin whatever's happening? I even sometimes forget that I don't need to do that anymore, cause I never grew my hair back, I just shave it. There was so much freedom in not having to do my hair. No product, no nothing. Just like water. I was free."

I [tried a wig] and Lord Jesus, I had to give it up — I could not wait to throw that thing in the trash. I had one wig, and I only really wore it on some occasions. Like, my uncle had a birthday party, I wore it there. My sister got married, I wore it there. I remember I was driving with my mom, we were on the expressway, and it was just itching so bad, I couldn't take it — I just took it off, and there was someone beside us. When he had passed us, I had the wig on, and when we passed him, I was totally bald. He looked like, 'Whoa'.

So, yeah, sometimes I do get sad when I look at them because I wish they weren't there. I just wish that I could go back to March 2011, or maybe even December 2010 — I found the lump in January 2011. Back in December of 2010, I was in Florida for the Christmas season, just enjoying life. And sometimes I do think back and wonder what life would be like in January 2011 had this lump never occurred and had I never gone through it. But I don't dwell on those moments for long.

You know what's funny? Before diagnosis, my boobs were so small. I was wondering how the hell did this little tumor find this little bit of breast tissue on this little itty bitty boob? So, actually, my little boobies are bigger than what they were before cancer.

I'm slightly self conscious because due to the nature of my surgery, I did the reconstruction with the tissue coming from my inner thigh. So I have these 13-inch scars and they wrap around under the buttocks. So it's like bikinis are out of the question. I don't care about the stares and everything, but it's my own personal thing I have to deal before I can say I'm at a point where I'm comfortable. Attitude means a whole lot. And it doesn't mean that you're not sick, or acting like you're not going through this, but it just means that you've accepted the fact that you are going through it, but in spite of, you're gonna smile."

"I tried the cold cap treatment, here in the UK...the problem is it’s a known fact it doesn’t work with Afro hair, so I ended up losing my hair two weeks after my first chemo treatment. I couldn’t stop crying as the hair fell out and left huge patches. So I decided to shave it all off. There were a lot of tears, but I must admit that when it came off I felt liberated. And very proud of myself for taking that stand!

I got experimental with wigs. I must admit, I wore many weaves beforehand, but didn’t know anything about wigs. So when I first went wig shopping it was hilarious experimenting with synthetic wigs. I purchased two cheap ones and a couple days later had an allergic reaction to the synthetic material. And the hospital one I was given by a local cancer charity was not made for black women’s hair and there just wasn’t many to choose from. So I invested in a special human hair wig which set me back £350 [$458.56], but it gave me the confidence to get out the house. I wasn’t comfortable showing my bald head yet.

Because of my age and family history the recommended course for me was a double mastectomy. I knew this from the very start, so I had time to digest it, but the breaking point during treatment came when I lost my eyelashes and eyebrows. Before I lost them I admit they were some of the only things that made me feel womanly and this along with my hair made me struggle to look at myself in the mirror.

I used to wake up and before I faced anyone, including the postman, I would get a full face of makeup on, pop on a wig, draw on my eyebrows, and stick on a set of fake eyelashes. Truth was underneath the bravado, and positivity I presented — I felt ugly and I felt worthless. I had never been the most confident girl in the looks department before cancer, but I knew my looks didn’t define me or the person who I was.

Breast cancer robs you of all the things society says makes you a woman, but this doesn’t have to define you."

"Obviously, the most important thing to me was my life, and doing whatever I had to do to beat this whole thing. But I would be remiss in saying I didn't have any thoughts about or hesitation about losing my hair. For me, it was kind of like acknowledging, in a public sense, that I was sick.

There was no other real outward way that no one could really tell what was going on with me. The port through which I had that I received chemotherapy, I could hide that with my clothes. But losing my hair was like, OK, now everyone's going to officially know that something's wrong, that I have cancer, or they're going to question what's going on with me — I was nervous about that.

Once my hair started to fall out, it was a kind of one of those things where I could either sit back and watch it happen and feel like I didn't have any sense of control at all, or I could take control of the situation and do something about it myself. My hair probably started falling out after my second round of chemotherapy and I made a decision that I was going to shave my head myself. It was more traumatic for me to sit and watch my hair fall out. Once I did that I felt liberated, I felt free.

At that moment, I didn't feel confident enough to leave my house without a wig or a hat or something like that. That took a while, but I felt OK. I didn't feel like I was on top of the world, but I felt OK. Toward the end of my therapy is when I kind of got a little bit more brave and I got more confident in what was going on and I shared pictures of myself without my hair on social media and I did leave my house a few times without anything on my head.

I grew my hair all the way back out after I had chemo. I had loved myself with short hair when my hair first started growing back. I had never seen myself with the short haircut at all. Loved it, it was beautiful. But then I made the decision just to keep letting my hair grow.

When I had the mastectomy, they put in tissue expanders initially. So those looked kind of strange. They didn't look like natural breasts at all. They were hard and uncomfortable. But at that point, I already kind of viewed myself differently. Having gone through chemotherapy and cancer, I didn't view myself the same. I was a different person, I couldn't compare myself to my old self, prior to my cancer diagnosis at that point, so I was more accepting of who I was at that point.

I had come to this point in my life where it's like a near death experience and I made it through. There was no way I could ever go back to the way I was."