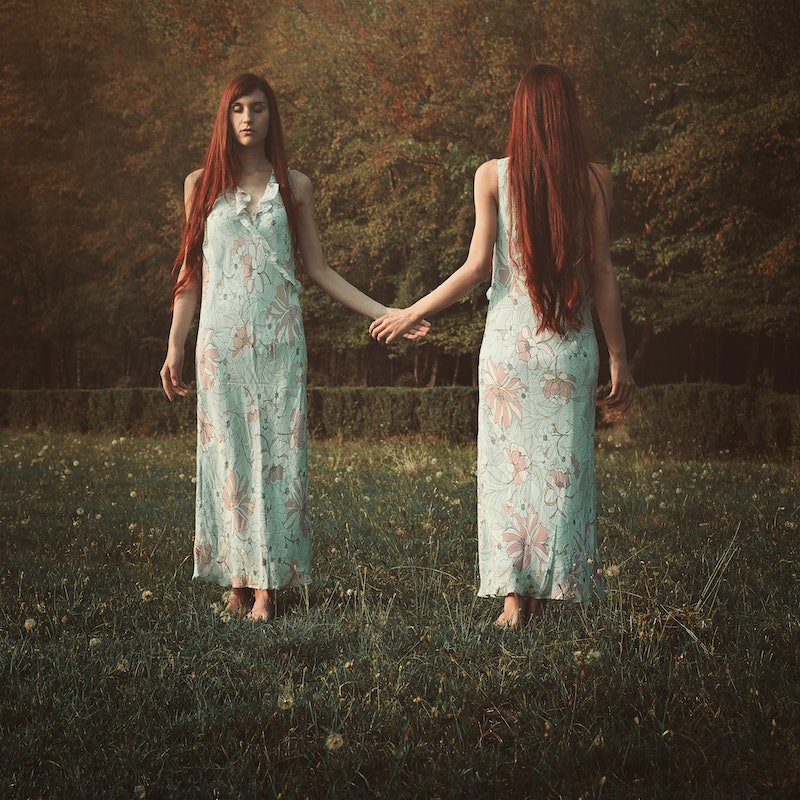 Ever seen your double? The creepy myth of the doppelgänger essentially describes the evil twin archetype. In modern times, we sometimes use the term casually to refer to a "twin stranger," or a person who just so happens to uncannily look like us or someone we know. But historically, the doppelgänger is believed to be a supernatural entity — someone's ghostly double. Tales of someone seeing their double have appeared throughout history, and in cultures all around the globe — and these encounters are widely considered to be sinister in nature, and omens of illness, death, or tragedy.

The word doppelgänger is German in origin, and means"double goer" or "double walker." And while the word is sometimes used to describe someone's real-life lookalike, the word is technically defined as "a ghostly counterpart of a living person," directly implying its paranormal nature. Creepy. The concept of the doppelgänger has been explored in film, literature, art, and more — think films like The Double and 2019's Us. But this isn't just a trope for movies. Through history, there have been some well-known (and terrifying) true stories about doppelgängers that will send shivers down your spine.

If you're looking for a scientific explanation for this allegedly paranormal phenomenon, know that the appearance of one's double may be triggered by a health issue and be simply part of a hallucination. But when it comes to the following strange and famous cases, you'll have to decide for yourself. Check out these four bone-chilling, supposedly true accounts of doppelgänger sightings in all different scenarios. And on that note, avoid seeing your own double at all costs.

One well-known documentation of a reported doppelgänger sighting was from former president Abe Lincoln, who claims to have seen his doppelgänger reflected in a mirror on the night he was first elected to office. "[L]ooking in that glass I saw myself reflected nearly at full length; but my face, I noticed had two separate and distinct images, the tip of the nose of one being about three inches from the tip of the other. I was a little bothered ... but the illusion vanished," wrote Lincoln's friend, journalist Noah Brooks, as he transcribed Lincoln's words in his book Washington in Lincoln’s Time. "On lying down again, I saw it a second time, plainer, if possible, than before; and then I noticed that one of the faces was a little paler — say five shades — than the other."

While Lincoln may have found the phenomenon strange, his wife interpreted it as an omen of tragedy to come. According to the retelling, she allegedly read his vision to say that he would indeed be elected for a second term of presidency (hence his visage appearing to him doubled on the night of his election), but that the sickly, ghastly appearance of his double signified that he wouldn't live through his second term. As we know now, both of these predictions turned out to be true.

The Double Of Emilie Sagée

While many reports of doppelgänger sightings involve a person seeing his or her own double, in this case, young Emilie Sagée's doppelgänger was apparently visible to everyone but. Sagée was a schoolteacher in Latvia in the mid-1800s. She was a good teacher and well-liked, but had an odd track record of reportedly having had 18 different teaching positions in just 16 years. And after hearing the reported accounts of the supernatural twin entity that followed her about, it's easy to make a judgment about why.

According to VICE in a piece originally published on Broadly, students at the school where Sagée taught began to see, well, two of her. "As she wrote on the blackboard, a second Ms Sagée appeared in front of the class, mimicking the teacher's movements," reported VICE. "One evening, as Sagée ate in the dining hall, it appeared again, mirroring her actions once more." At one point, it was even noted that Sagée's double sat down in a chair at the head of the classroom, staring straight toward the children - while the real Sagée was in the school garden. While she apparently never saw her own double, it's reported that when the entity was present, "the color would drain from her face and, overcome with fatigue, her movements would become listless[.]" Eventually, the school let Sagée go due to the disturbing presence of her double.

Catherine the Great, otherwise known as the Empress of Russia throughout the 18th century (and the longest-ruling female leader in the country's history), had a haunting (and, as it turns out, possibly sinister) encounter with a doppelgänger shortly before her death in 1796.

According to reports, Catherine's servants woke her frantically one night after having seen her visage, plain as day, sitting silently in her throne room. Confused, Catherine accompanied them back to the throne room only to find her double sitting on the throne, plain as day. Catherine reportedly ordered for her servants to shoot the doppelgänger - but just a week later, Catherine died suddenly of a stroke. Is it possible her double appeared to her as a deathly omen, foreshadowing the events to come?

The Future Self Of Johann Wolfgang von Goethe

I'll wrap things up with a less sinister and haunting account of a doppelgänger sighting, just to give you hope that if you do someday encounter a ghostly apparition of yourself, it may not mean impending doom and destruction. Johann Wolfgang von Goethe, a well-known German poet and politician, apparently encountered his double while riding on horseback home from spending time with his beloved future wife, riding in the opposite direction on the same road. "I saw, not with he eyes of the body, but with those of the mind, my own figure coming towards me on horseback, and on the same road, attired in a suit which I had never worn," wrote Goethe in his autobiography. "As soon as I shook myself out of this dream, the figure had entirely disappeared."

Although the encounter was brief, it was not forgotten - as eight years later, Goethe apparently found himself, by freak chance, riding along the same road to see his lover, wearing the exact same clothing that his doppelgänger wore years prior. In this case, Goethe interpreted his encounter with a doppelgänger to be a glimpse into the future, a sighting of his future self, rather than a bad omen foreshadowing death or illness. Perhaps there's hope for a doppelganger sightee yet.

More like this
20 Genius Kitchen Storage Solutions For Decluttering Your Space
By Emma Garza
This TikTok Hard Seltzer Hack Involves A Milk Frother
By Alexis Morillo
Eleven From ‘Stranger Things’ Is A Cancer Zodiac Sign, An Astrologer Says
By Brittany Beringer
American Girl Doll Memes Are Going Viral On Instagram & Tiktok
By Emma Carey
Get Even More From Bustle — Sign Up For The Newsletter