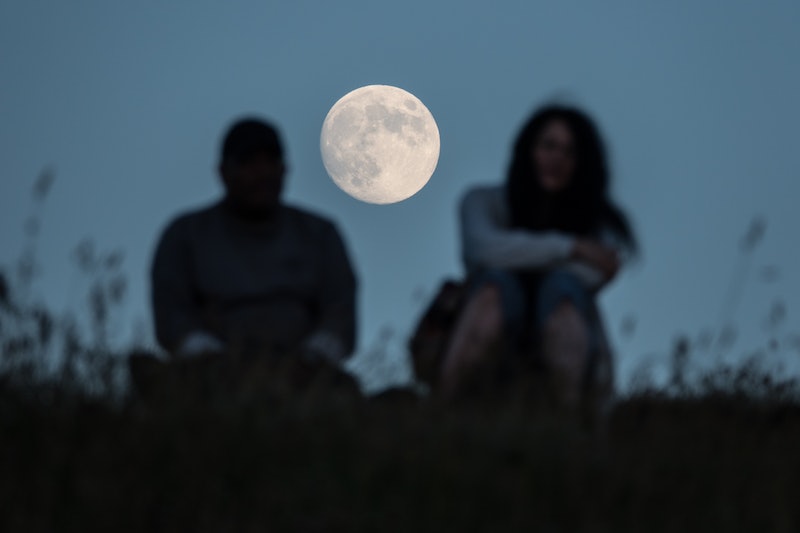 July's astrological line up is more packed than Coachella's main stage. First of all, it's eclipse season. Then, six planets are scheduled to be retrograde over the course of the summer, five of which will happen concurrently in July. Now, it seems we can also count on the moon to add its lunar layer to July's astrological ~vibe~. July new moon astrology predictions get swept up in the planetary motions. But don't worry, this dizzying month won't leave you feeling like you just stepped off an intense roller coaster. There's a lot of reflection to look forward to.

Expect to feel the impact of the new moon beginning on Jul. 12 at 10:47 p.m. ET, according to Time and Date. As always, the sky won't look aglow since this phase of the moon produces approximately zero moonbeams. But things will be illuminated on a more spiritual level. The new moon phase of the lunar cycle is regarded as a favorable time for a new beginning. Since, you know, the new moon is the start of a ~new~ cycle. HOWEVER because of Mars, the planet of action, being retrograde and a partial solar eclipse occurring on the same day, July's new moon is so much more than a plain ol' new beginning. It's more about a refresher. Which sounds completely appropriate for a midsummer moon.

More like this
These 4 Signs Are The Sarcastic Jokesters Of The Zodiac
By Brittany Beringer
These 4 Signs Are The Seductive Sirens Of The Zodiac
By Brittany Beringer
The 3 Most Family-Oriented Zodiac Signs, According To An Astrologer
By Nina Kahn
Here’s Why Sagittarians Should Pursue A Career In Academia
By Nina Kahn
Get Even More From Bustle — Sign Up For The Newsletter