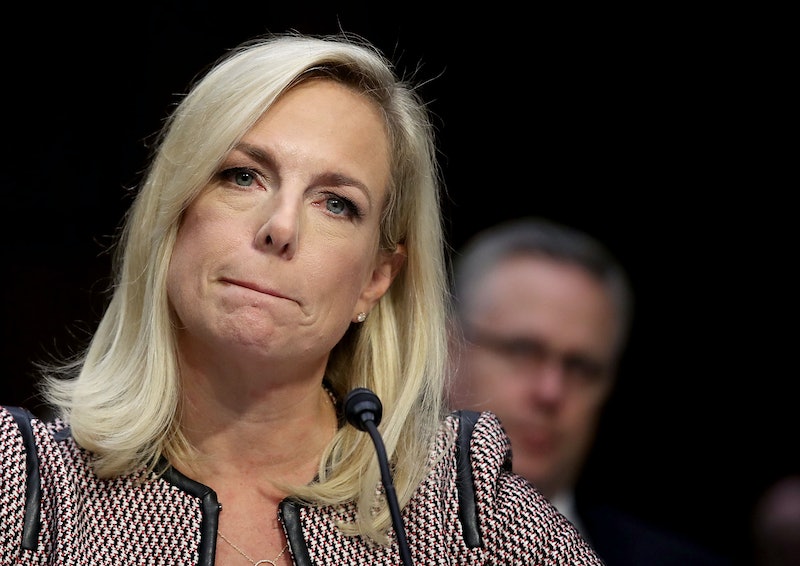 On Tuesday at a Senate Judiciary Committee hearing, Secretary of Homeland Security Kirstjen Nielsen, was grilled by senators under oath about President Trump's reported remark that El Salvador, Haiti, and other African nations were "sh*thole countries." The reported comment was made at a bipartisan meeting on the Deferred Action for Childhood Arrivals (DACA) program which Nielsen also attended.

It was perhaps the most notorious news of January 2018 so far. At the meeting last week, Trump reportedly asked why immigrants from those "sh*thold countries were coming to the U.S. and not people from Norway instead. The backlash was swift.

That same day, Trump denied saying the word and tweeted, "[I] never said anything derogatory about Haitians other than Haiti is, obviously, a very poor and troubled country. Never said 'take them out.' Made up by Dems. I have a wonderful relationship with Haitians. Probably should record future meetings - unfortunately, no trust!" Various Republican senators have since claimed that Trump said "sh*thouse" instead of *sh*thole."

On Tuesday, Nielsen testified under oath about the president's reported comments. Democratic Sens. Dick Durbin, Cory Booker, and Dianne Feinstein asked Nielsen pointed questions about the meeting, and there were many heated exchanges between them and Trump's Homeland Security secretary.

After Nielsen said that she did not recall Trump using that specific word — sh*thole* — to describe those countries, Booker said, "I don’t have amnesia on conversations I had in the Oval Office going back months and months. I had individual meetings with the president and I’ve had group conversations where there was, as you said, cross-talk. And why — why is this so important? Why is this so disturbing for me? Why am I frankly, seething with anger?"

Booker railed against Trump's "vile and vulgar" comments. "That language festers when ignorance and bigotry is aligned with power — it’s a dangerous force in our country," he added. "Your silence and amnesia is complicity."

During the hearing, Democratic Sen. Dick Durbin — who was present at the meeting last week — asked Nielsen, "You said on Fox News that the president used strong language. What was that strong language?"

Nielsen responded that she couldn't remember the "specific words" but added that "What I was struck with, frankly, as I'm sure you were as well, was just the general profanity that was used in the room by almost everyone."

Durbin asked Nielsen, "Did you hear me use profanity?" Nielsen stayed silent for a second and then finally responded, "No, sir."

3. Nielsen Claimed She Doesn't Know If Norway Is A Predominantly White White Country

A visibly-stumbling Nielsen responded, "I'm — I — uh — I actually do not know that, sir, but I imagine that is the case." Many people on Twitter reacted to her answer with disbelief.

4. Nielsen Admits She Has Never Met A DACA Recipient

Moving on to discuss the DACA, Sen. Booker asked if Nielsen had ever met one of the recipients of the program (who are often called Dreamers). Nielsen said that she had not. "I have not met with DACA recipients as Secretary of Homeland Security. No, sir," Nielsen said. Booker then asked, "Have you met with Dreamers before?" Nielsen admitted, "Not as self-identified, no."

In a tweet later, Booker said, "Astonishing. The head of the department overseeing immigration enforcement has admitted, under oath, that she has not met with any Dreamers."

As Trump continues to deny his "sh*thole countries" comment and Republican senators continue to defend him, Nielsen's hearing shows just how much outrage this reported comment from the president has sparked.