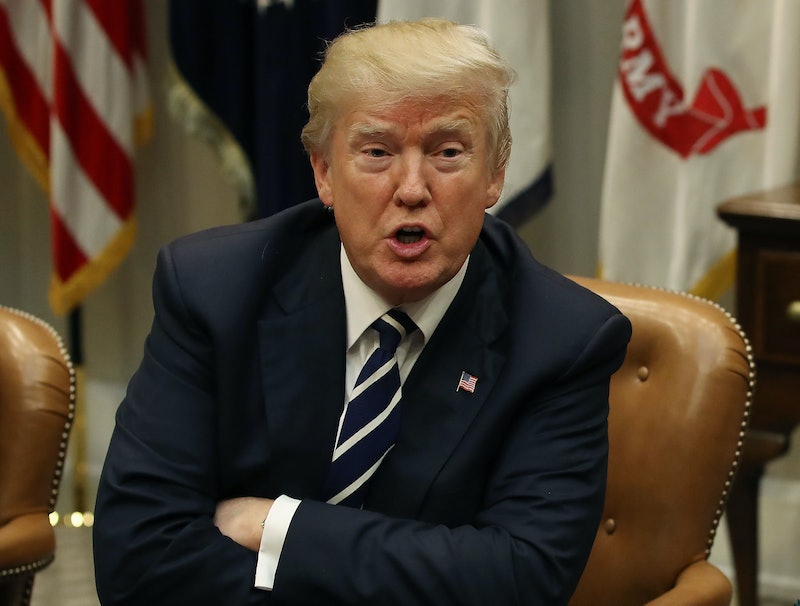 The news spiral after President Trump reportedly referred to Haiti, El Salvador, and the African nations as "shithole countries" may have seemed like a bit much, but it's taken an even more drastic turn. Now, apparently two Republican senators are claiming Trump said "shithouse" rather than "shithole." While this doesn't seem like much of a mitigation of the sentiment behind the words, it is one very important thing: a denial of the "shithole" comment.

The two senators, Tom Cotton of Arkansas and David Perdue of Georgia, initially said that they did "not recall" Trump making the offending statement. Their Senate colleagues who were also present at the White House meeting in question backed up the Washington Post's initial reporting that Trump said shithole, with Democrat Dick Durbin saying that "Trump said these hate-filled things, and he said them repeatedly." Sens. Tim Scott and Lindsay Graham, both Republicans, also said that the president had made the comments.

By Sunday, though, once the story had been plastered all over the press and legions of foreign countries had started demanding apologies over it, Sens. Cotton and Perdue had a different story.

He didn't say "shithole," Cotton and Perdue said, denying the inflammatory statement and denigrating those who had made the claim. Instead, he said "shithouse."

There's no difference in meaning between the two vulgarities that the president reportedly used, except that by claiming he said the second, it allowed the two senators to deny that he had said the first. When headlines ran reporting their statements, at least some of them said that the senators had denied Trump's statement — without making it clear what they were really saying.

Sens. Purdue and Cotton also insulted their Democratic colleague Sen. Durbin of Illinois, saying that he had often made things up and that he was lying about Trump's vulgar remark. Altogether, though, that adds up to three different stories coming from the same two senators: they didn't remember whether or not he said it, he said "shithouse" instead, or he didn't say it and Sen. Durbin made it up.

Neither Trump nor the White House denied the initial reports, but then Trump did tweet on Friday saying that he had not used the word being reported. "The language used by me at the DACA meeting was tough, but this was not the language used," he wrote on Twitter. Before that, the Washington Post reported, Trump had called friends for feedback on the comment, and the people he spoke too generally didn't seem terribly bothered by it. They reportedly expected it to play well with Trump's base. Since the international uproar on the subject, though, Trump has switched to full denial mode. Trump, like Cotton, also called Sen. Durbin a liar.

Cotton in particular has a history of defending Trump, once even saying that various cabinet members should resign rather than disagree with Trump on the issue of the Iran nuclear dear. Senators generally have a collegial relationship amongst themselves, so it's somewhat surprising that he would outright impinge on Durbin's character by saying that he has a history of lying — and it's surprising to other members of the Senate as well.

“Someone saying that Sen. Durbin or Sen. Graham is going to make something up that the president of the United States has said, and thinking they would do that to gin up people one way or another, that’s wrong," said Sen. Joe Manchin of West Virginia.