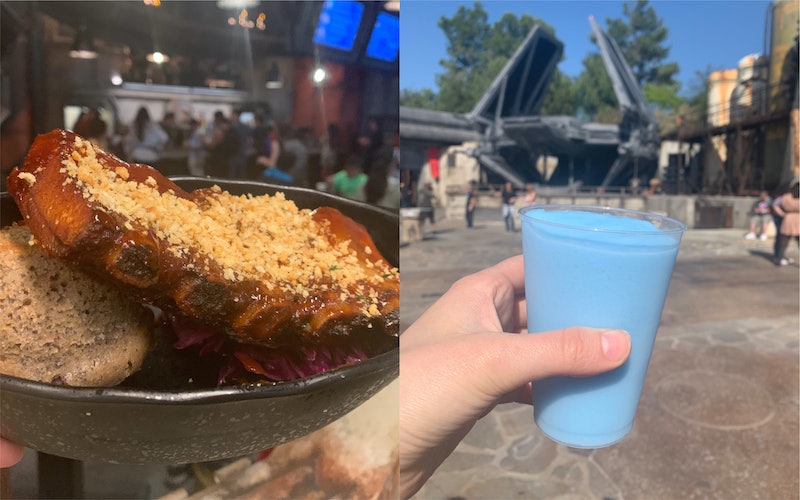 Considering the two halves of most nerds' brains are devoted to the two finest things in life — Star Wars and food — there has been a lot of buzz about the food at Disneyland’s Star Wars: Galaxy’s Edge. But while the pictures Disneyland recently released of the menu options are plenty of get excited about on their own (BLUE MILK, y’all), the truth is that unless you have multiple stomachs and can stomach standing in line multiple times, you probably won’t get to sample everything during your limited trip to the park — which is why it’s important to know going in exactly which foods are worth standing in line for. Disney invited me to preview Star Wars: Galaxy’s Edge just before the park’s official opening, where I used my time there to deduce just that.

It’s worth noting that, line-wise, you’d be wise to have the Disneyland mobile app on hand; subject to menu availability, mobile ordering will be available for three out of four of the food destinations in Star Wars: Galaxy’s Edge, with the exception of Oga’s Cantina. Which of those four destinations you decide to frequent will depend on whether you’re a peckish porg or hungry enough to eat a porg (too soon?). Thematically, each location is a part of the Black Spire Outpost, residing in the remote planet Batuu where Galaxy’s Edge is set — something Disney says it intentionally did to create a more rural, immersive feel for the Star Wars universe, which extends to the food options. It’s why most of the meals have a home-cooked vibe (preferable to, say, Jakku’s quarter portion rations, or Chewie’s aforementioned consumption of porgs), rather than the more gimmicky things with logos you might be used to seeing in Downtown Disney or other parts of the parks.

The four main places to grab a bite (or a sip) in Disneyland's Star Wars: Galaxy’s Edge are Oga’s Cantina, Ronto Roasters, the Milk Stand, and Docking Bay 7 Food and Cargo — all of which have their own distinct feel, and boast unique menu items that won't disappoint. That said, given you likely will only have a day or less to get around the park, here are the main draws from each location that are most definitely worth standing in line for.

The first is Oga’s Cantina, which is smack dab in the middle of Star Wars: Galaxy’s Edge and serves as its “main watering hole,” per Disney. It’s where you’ll find drinks equal parts geeky and ‘grammy, including the Bloody Rancor, the Fuzzy Tauntaun, and the Carbon Freeze. I will give you a heads up right now — if you’re looking for "The Instagram," or specifically a stellar Boomerang, you’re going to want to go with either the Bespin Fizz (a combination of rum, yuzu purée, pomegranate juice, white cranberry juice, and “cloud swirl”) or the nonalcoholic Carbon Freeze (Powerade Lemon Lime with wild strawberry, blueberry, and green apple popping pearls) — they’re still spitting mist when the server brings them to the bar, and are immediate showstoppers.

On taste alone, though, the winning drink is hands down The Outer Rim; it’s basically A Batuu margarita, made with tequila, cedilla acai liqueur, lime juice, and pure cane sugar, rimmed with black salt as dubious-looking as the Outer Rim that gave it a name, and topped with “exotic fruit purée.” Not only is it delicious, but it really does have an otherworldly kind of feel to it — a perfect marriage of something you already know, expanded to be made a part of a universe you already love.

For podracers, traders, and smugglers on the go, there’s Ronto Roasters, where you can load up on a few different fast dishes and themed nonalcoholic drinks. While Ronto Roasters was the one food experience in Star Wars: Galaxy’s Edge that I didn’t manage to get to, the Ronto Wrap, made with roasted pork and grilled sausage in pita wraps, seemed to be a popular pick, as was a Tatooine Sunset drink reminiscent of an Arnold Palmer. I’ll be honest and say that if you’re going to spend money and time on getting a full meal in Star Wars: Galaxy’s Edge, Docking Bay 7 Food and Cargo may be a more exciting bet, giving guests more variety and the option to sit — that said, the Ronto Wrap did look pretty darn delicious.

Other options at this stall include early day options such as the Ronto Morning Wrap — essentially a breakfast version of the Ronto Wrap, made with eggs — and the The Rising Moons Overnight Oats, which is light purple in color and comes topped with dragonfruit. If you can get yourself into Star Wars: Galaxy's Edge before the breakfast menu ends at 10 a.m., these definitely looked like they were worth a taste.

Then there’s the Milk Stand, a stall that serves what’s arguably the most iconic Star Wars food in the franchise (Rey’s un-CGI’d magical rising bread notwithstanding): Blue Milk. Per Disney, a lot of time and energy went into imagining what Blue Milk looked like brought to life, and the result is frozen, fruity, and refreshing drink that is sweet, but not too sweet. Whether you start being able to wield the Force after you drink it is still up for debate, but while you wait it out, you can try a second version — the “Green Milk,” which is similar in taste and consistency to the Blue Milk, but has a more floral flavor to it, and evens out the sweetness nicely.

But even as someone who loves floral flavors, I have to say, go for the Blue Milk. It’s delicious. It’s iconic. And it’s ridiculously easy to order on the Disneyland mobile app, if the line gets long; I queued mine up the moment I arrived in the park, and sure enough, within minutes of indicating that I’d arrived to pick it up, it was waiting for me in all its Blue Milk majesty. After that it's just a matter of getting a good 'gram before it starts to melt (or a stormtrooper interrupts you asking if you've seen a Wookiee anywhere).

I truly did save the best for last on this one; the food at Docking Bay 7 Food and Cargo may be a little pricey, with meals in the $15 to $20 range, but for the culinary experience alone they’re definitely worth the splurge. Everything on the menu, from Fried Endorian Tip-yip to the Ithorian Garden Loaf, has a distinctly Batuu feel to it, putting creative spins on earthly hits — and what you end up with tastes more like something you’d find in a high-end restaurant than a theme park. The winner here, though, was the smoked Kaadu ribs, which were served in a bed of cabbage slaw and came with a blueberry corn muffin. Extremely close runner-up — and definitely worth adding to your order, if you have room for dessert — was the Batuu-bon, a chocolatey dome decorated in purple swirls and filled with rich creams.

Getting the most out of Star Wars: Galaxy’s Edge — particularly food-wise — may seem daunting, but the good news is that when it comes to dining in this new land, you really can’t go wrong. Don’t forget to stop by Kat Saka’s Kettle for some sweet and spicy popcorn on the way out; the two competing flavors bring balance to the snack as Light and Dark bring balance to the Force. And speaking of the Force, may it extremely be with you on your foodie quests in Star Wars: Galaxy’s Edge. In the meantime, you can learn more about reservations and admission into the park here.