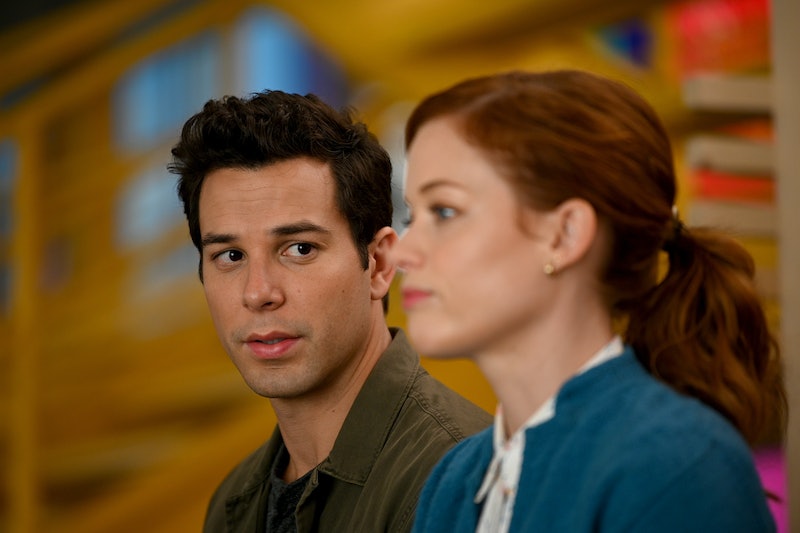 Many of us have been on one end of the following situation: you have a really good friend... maybe a best friend, and all of a sudden, one of you develops feelings that are more than platonic. Whether the trigger is something as innocuous as a dream, or an unintentional glimpse into your friend’s thoughts, once you find out there are some unrequited feelings between you and your pal, things can get hairy.

This is exactly the situation that Zoey Clarke finds herself in when we meet her in NBC’s new show Zoey's Extraordinary Playlist. Zoey (played by Jane Levy) is a serious-minded coder at San Francisco tech company SPRQ Point, who prefers educational podcasts over emotionally charged music. But when a freak accident gives her the ability to hear the innermost thoughts of everyone around her (from strangers on the street, to her own parents), her life and relationships are turned upside down.

At work, Zoey's rock is Max (Skylar Astin). He’s her BFF who gives her the confidence and stability to go after a promotion she clearly deserves. What she didn't bargain for is the fact that Max is secretly in love with her, as he reveals to her when he's suddenly singing his heart out to her– and he doesn't even realize it.

Wait. What? My BFF is in love with me? Nobody panic. There are ways to handle your bestie falling in love with you (or vice versa), and Zoey is going to figure it out right alongside you. Make sure to catch Zoey's Extraordinary Playlist, with a new episode now streaming on NBC.

Whether you're the one pining, or you're the object of this newfound affection, rule number one is — don't freak out. Sure, it's natural to be a bit shocked, but the worst thing you can do is start treating your BFF differently. Take Zoey and Max for instance. When Max unwittingly reveals(through song no less) that he's been up all night thinking about Zoey she can’t help but panic a little – we get that, I mean, “What the BFF?” But as he concludes his declaration of love (totally unaware of his actions) and notices the look of surprise on her face, he’s the one who’s a bit confused. Luckily, she plays it off, and he’s none the wiser. Of course, it's natural to have a reaction, but it’s important to keep your calm. Way to go, Zoey.

2. Manage any distracting crushes with tact

Before the big revelation of Max's feelings for her, Zoey treats him like any other friend would — meaning she confides in him about any and all crushes. On the top of her list is SPRQ Point's Marketing VP, Simon, who despite his slick exterior, is going through a really difficult time. Zoey finds this out when she overhears him singing a pretty emotional song. Zoey and Simon happen to bond on a deep emotional level, which she would normally give Max all the tea about. But with the new knowledge of his Max’s feelings for her, she decides to tread lightly.

3. Express yourself... and encourage them to do the same

Okay, when you're navigating a shifting relationship, especially a close one, it's best to encourage your BFF to express themselves freely and openly, and for you to do the same – though you may prefer not to sing your deepest heart song to the rafters like everyone around Zoey. While Max doesn’t know he revealed his truth, it brings to light something that is more painful if left bottled up, and now Zoey knows Max is ready for love, and she can support him. And if you’re not ready to talk things over with your BFF in a candid conversation over wine, feel free to express yourself in song. Hey, it worked for Max.

4. Know that whatever happens, your bond is solid

From Zoey handling tough times at home to fighting for the big promotion in her male-dominated office, Max is and has always been Zoey's biggest cheerleader. That's why it's initially so unsettling to think that their bond might be compromised from one party (like Max) ~catching feelings~. But no matter what happens, these peas in a pod, like you and yours, can always be soul twins, and make each other stronger, happier, and more at ease – as long as they put their friendship first.

This article is sponsored by Zoey's Extraordinary Playlist, which is now streaming on NBC.